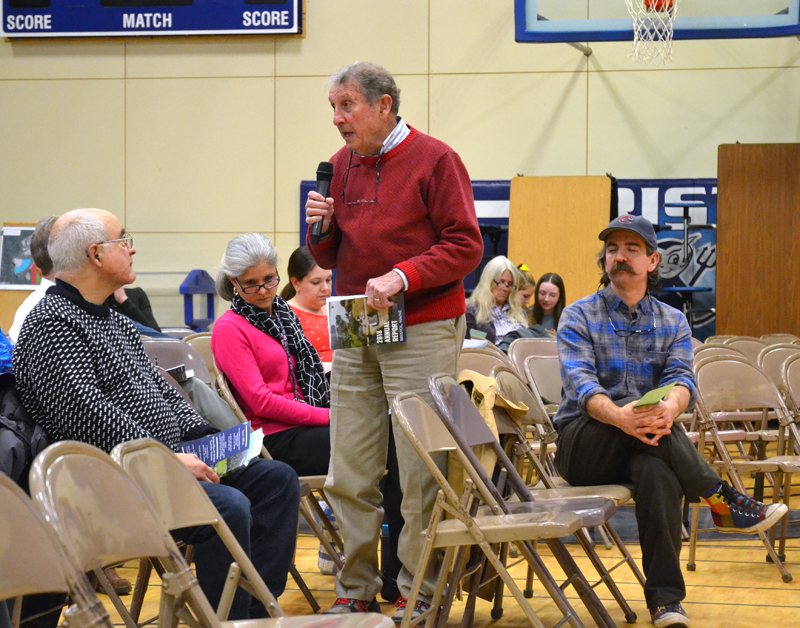 At a town meeting with limited discussion, Bristol voters gave the nod of approval to a new softball field and passed a $5,262,226.26 education budget in under two hours on Tuesday, March 19.

Residents buzzed through and approved 12 articles related to the education budget, an increase of $701,179.30 or 15.37 percent from the previous year, in seven minutes. Jim Albright expressed concern about the increase and asked if measures had been taken to reduce other expenditures. 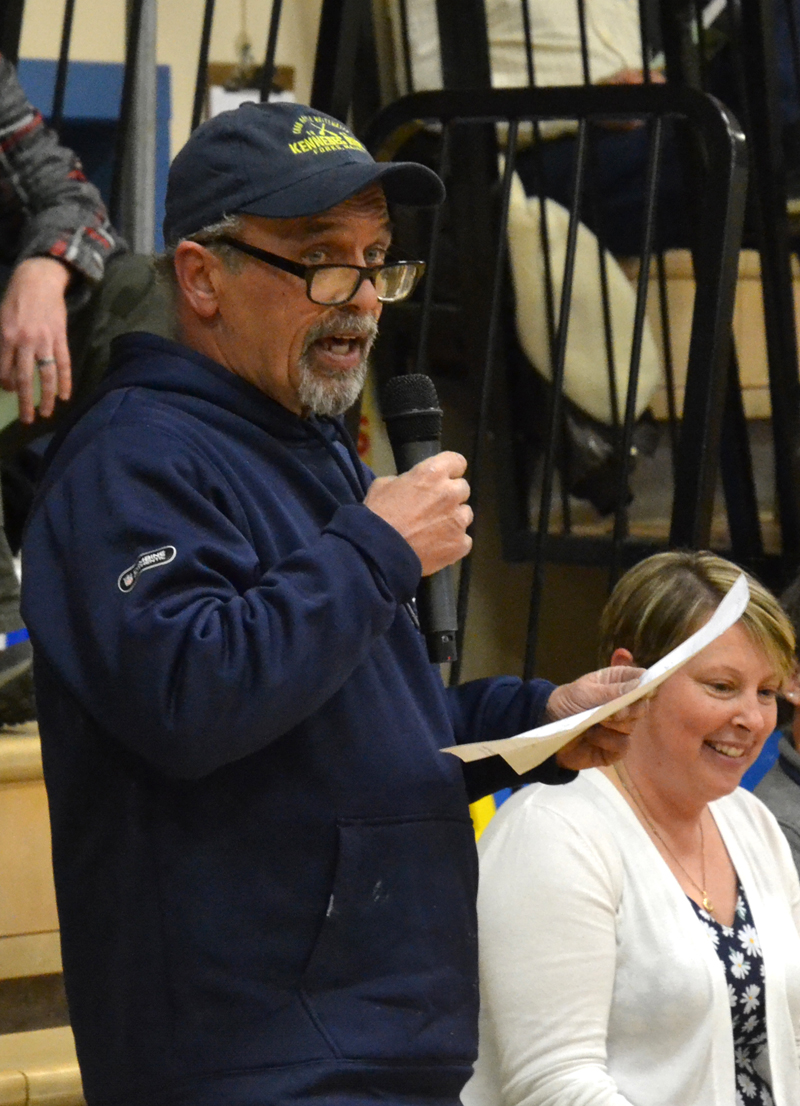 Dave Kolodin, the chair of the Bristol School Committee, explained that most of the increase stems from a higher number of secondary education students. Last year, Bristol approved a budget for 72 secondary education students with a two-person contingency in case new students moved into town. There are currently 75 Bristol high school students. The budget for next year includes funds for 90 students with a two-person contingency due to the large class entering high school in the fall.

“I think this is an extraordinary number for this year,” Kolodin said of the increase.

Marvin Farrin spoke on behalf of the Bristol Softball Committee in support of the construction of a new ball field near the school. Currently, BCS buses its softball team to a field at Pemaquid Beach Park. The new field would be constructed next to the school, which would keep the students on campus, he said.

The article that residents voted on authorizes the school committee to transfer up to $25,000 in undesignated funds left over from the 2018-2019 fiscal year to the capital projects fund for the construction of a softball field. The same warrant article also asks the town to authorize the school committee to expend up to $300,000 from the account and from grants received to pay for the construction of the ball field.

Donors have already pledged $205,000 for the project. Farrin said the softball committee and others have committed to raising the rest of the funds necessary for the project and that the $25,000 would be a “good-faith gesture on the part of the town.”

“These folks really make the school run, and we’re going to miss them,” Ribeiro said.

Later in the meeting, voters approved an amendment to the harbor ordinance that states “all moorings are for assigned craft only, as indicated on the most recent mooring registration application.”

Taxpayers will not feel the full impact of the increase. The budget calls for $1,134,200.08 in funds from taxation, an increase of $171,682.58 or 17.83 percent. The rest of the budget will be funded through balances carried from the previous year, surplus, excise tax, grants, and other sources.

While voting on requests from nonprofits, residents elected to give $2,000 to New Hope for Women rather than the $1,045. Although the organization requested $1,045, the budget committee recommended the higher amount after hearing compelling testimony about the services the organization provides, Bristol Budget Committee Chair J.W. Oliver said. 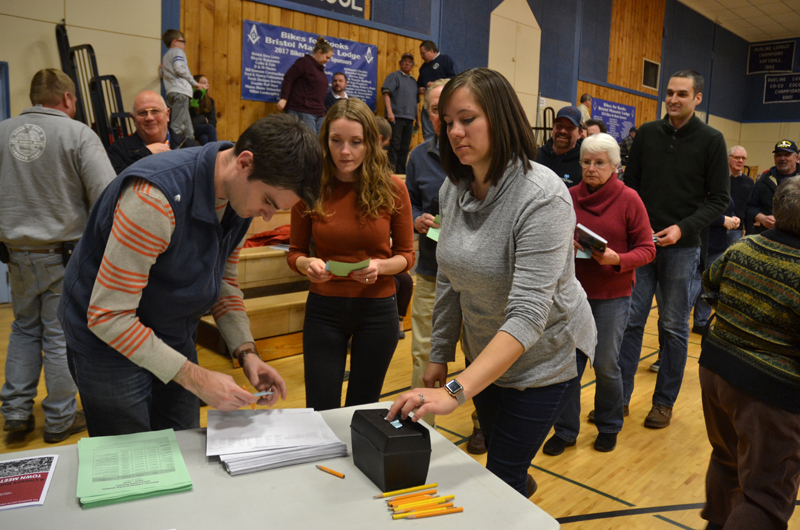 Sandee Brackett explained how the organization had helped her family after her stepdaughter was murdered. “After I spoke to the budget committee, they did increase to this amount, and I hope the rest of the town will also,” she said.

Selectman Paul Yates said the town tries to be consistent in giving organizations the funding they request.

“If one feels strongly about an organization that they think should have more money, I’m sure any of these organizations will accept donations,” Yates said. 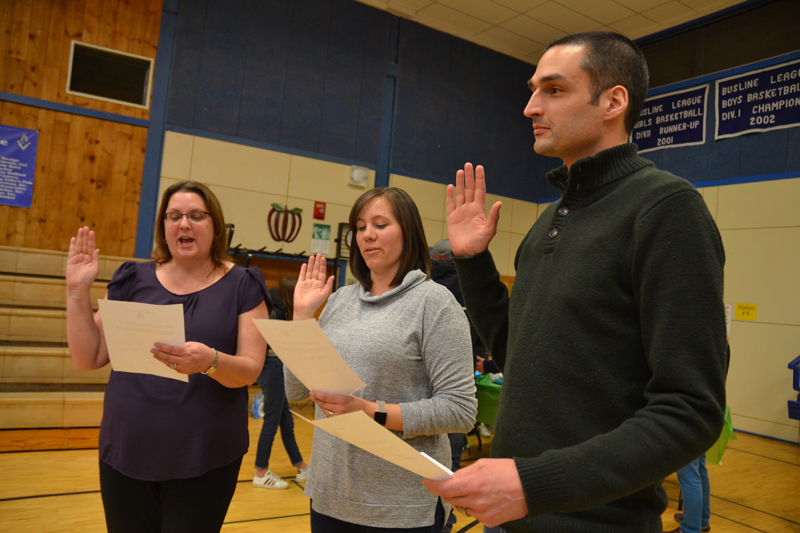 The beach pavilion project is not included in the proposed budget.

Bristol Parks and Recreation Chair Clyde Pendleton said there will be another public forum on the beach pavilion project on Tuesday, April 9 to give the community another opportunity for input.

CLC Ambulance is asking for an overall increase of $130,000 in contributions from its six member towns this year. The member towns are Bremen, Bristol, Damariscotta, Newcastle, Nobleboro, and South Bristol.

Voters elected Kristine Poland to the Bristol Board of Selectmen and Clyde Pendleton to the Bristol Parks and Recreation Commission at the polls Monday, March 18.

(Editor’s Note: An earlier edition of this article misidentified Candy Brackett Butler as Sandee Brackett’s daughter instead of her stepdaughter. The Lincoln County News regrets this error.)