After a half-hour discussion, Bristol voters authorized the Bristol Parks and Recreation Commission to hire a parks director during the annual town meeting at Bristol Consolidated School on Tuesday, March 21.

The Bristol Parks and Recreation Commission has been in the process of creating the position for almost a year. Approval at town meeting was a necessary step before the commission could start the hiring process. 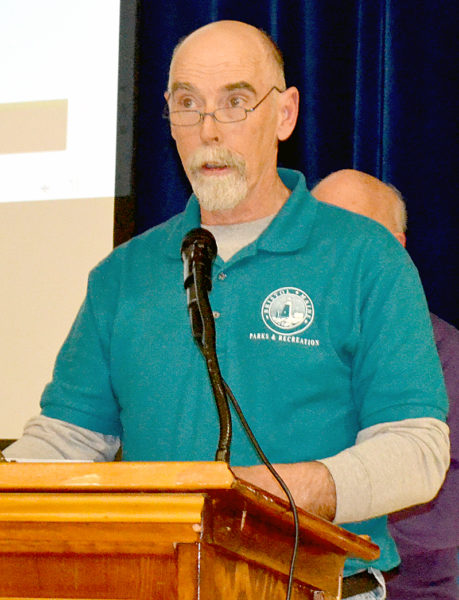 After moderator Don Means read the warrant article, Clyde Pendleton Sr., the chairman of the commission, gave a presentation on what the position would entail.

The parks director would oversee the day-to-day operations of the park, administer the commission’s budget, and serve as a liaison between the commission and the parks staff, the town, and the public.

In addition, the parks director would be responsible for creating new programs in the winter for both kids and adults, Pendleton said. The commission recently launched free activity nights in the BCS gym, and Pendleton hopes programming at the school will grow under a director.

Pendleton said the position would be full-time for 31 weeks of the year and part-time for 21 weeks. By hiring someone to oversee day-to-day operations, the commissioners would be able to focus on other areas, including creating three-, five-, and 10-year plans for the parks properties.

The director’s salary will be funded by revenue from Pemaquid Point Lighthouse Park entrance fees. The commission will increase the entrance fee at the park from $2 to $3 for visitors age 12 and up.

The fee change will not affect passes for Bristol residents. For unlimited access to Pemaquid Point Lighthouse Park and Pemaquid Beach Park, residents pay $8 for a new pass and $5 for annual renewals.

The $40,000 included in the salary line for the new position is an “arbitrary figure,” Pendleton said. The salary and benefits for the director will depend on the individual and their experience and education.

“We supported the budget, our recommendation was unanimous, and that includes the director’s salary,” Hanna said.

Resident Paul Leeman III asked if the commissioners would consider decreasing their stipends if a parks director is hired.

The commissioners have discussed the topic and feel it would be right to decrease their stipends, Pendleton said. The commissioners receive $600 a month from April 1 to Nov. 1 and $200 a month for the rest of the year for a total of $5,200 annually.

Some residents questioned the need for a town vote on the position, as the parks department is self-funding and does not receive tax dollars.

Hanna said the selectmen felt it would be appropriate to get residents’ permission for the parks director, much as they did for the creation of the town administrator position.

Craig Elliott echoed Yates’ comments, and said there is a lot more happening at the parks than people might realize.

“We have three selectmen, the town voted to hire an assistant, what’s the difference?” Elliott said. “You sit here and in an hour’s time spend $5 million. You’re getting something for nothing, and you’re going to argue for it for damn half, three-quarters of an hour!”

The article passed by an overwhelming majority.

“We should take better care of our students in grade school and high school, and have buses controlled by the school committee and the town of Bristol,” Lane said.

David Kolodin, who chairs the school committee, said the committee would take Lane’s comments under advisement.

Bristol Planning Board Chair Andrea Cox presented amendments to the town’s shoreland zoning ordinance. The planning board amended the ordinance to bring it up to the state’s requirements, Cox said.

In addition, the amendment “slightly rezoned” a section of Bristol Mills, bringing some buildings into compliance, Cox said. Rules about timber harvesting have been removed from the ordinance, and will now be dealt with at the state level.

Bristol Fire Chief Paul Leeman Jr. talked about the department’s request for $20,000 to make improvements to the Munro Bridge dry hydrant. Improvements would include digging out the adjacent pond a little more and the addition of a parking area for fire trucks, Leeman said.

The signs are available for a suggested donation to the Samoset Fire Co. More information about the signs and an order form are available on the town’s website.