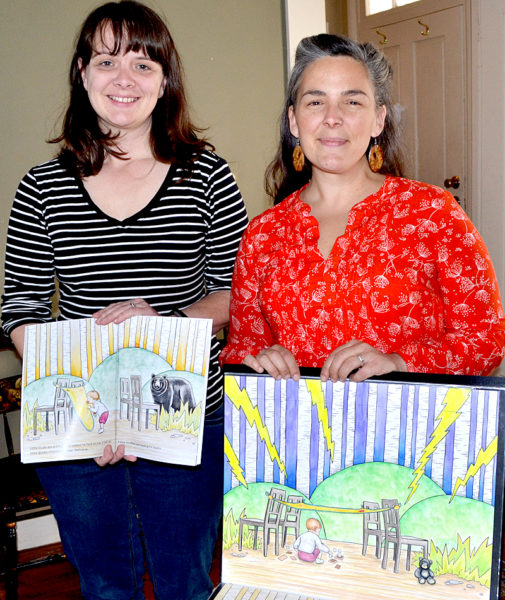 Kate Kastelein (left) holds open a copy of “Blankie’s Diary” as Crystal McLain displays one of her original illustrations for the book. (Maia Zewert photo)

A Damariscotta writer and a Bristol artist recently published a children’s picture book about the adventures of a child’s blanket.

“Blankie’s Diary,” written by Kate Kastelein and illustrated by Crystal McLain, is written as a series of diary entries by Blankie the blanket about his best friend, a boy Blankie refers to as Little Dude.

Blankie enables Little Dude’s adventures by becoming whatever his friend needs him to be – a cape, a tablecloth, a fort, or sometimes a napkin.

Kastelein originally wrote the story for a course at the University of Southern Maine a few years ago. “Blankie’s Diary” is partially inspired by her son and his blanket.

After revising the story and shopping the book to agents, Kastelein decided to forgo the traditional publishing route and instead self-publish “Blankie’s Diary” through CreateSpace, a business owned by Amazon. She reached out to her friend McLain about doing the illustrations.

Kastelein and McLain both grew up in Lincoln County and attended Lincoln Academy together. The two remain good friends, which made the collaboration easy.

“If I would have gone with an agent who would bring it to an editor, I would have had no say about the process,” Kastelein said. “I explained the idea to Crystal over a cocktail at the (Newcastle) Publick House, and she just understood it immediately.”

To illustrate Blankie and Little Dude’s adventures, McLain took some of the reality the story is based in and put it through the lens of a child’s imagination.

“All of this is taking place inside his house, but to him, these are big adventures, and I wanted to show that,” McLain said.

McLain also wanted to show that Blankie had his own personality. She asked Kastelein if the blanket could be yellow, unaware that the blanket Kastelein’s son carries is also yellow.

Once the story and the illustrations were complete, the duo received help from a number of people to prepare “Blankie’s Diary” for publication. Table 6 Designs in South Portland helped with some of the typesetting and formatting, and a photographer friend of McLain’s took digital images of the illustrations.

“Blankie’s Diary” was published in July, almost three years after Kastelein originally wrote the story. The book has received overwhelming support from the community, Kastelein and McLain said. They dedicated the book to their families and supporters.

“Blankie’s Diary” is available at Sherman’s Maine Coast Book Shop in downtown Damariscotta and will be sold at Granite Hall Store in Round Pond in the spring. The book can also be purchased on Amazon.

Although Kastelein and McLain are busy with other pursuits, they both would like to collaborate again in the future.

“This is the first, but I hope it won’t be the last,” Kastelein said. 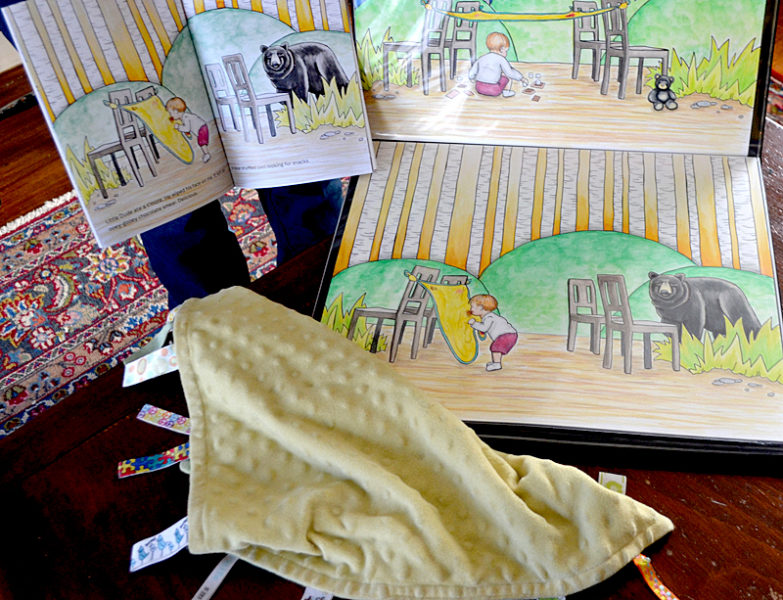