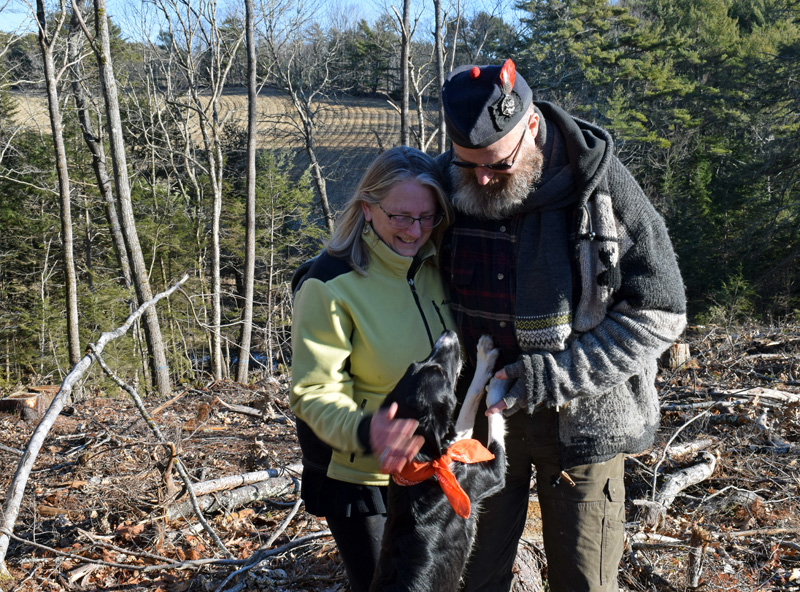 Helen Costello and Jeffrey Patterson play with one of their border collies on their Bristol property, The Byre at Piper’s Pond. The couple is turning the property into an animal and vegetable farm that will use regenerative agriculture practices. (Evan Houk photo)

A Bristol couple, Jeffrey Patterson and Helen Costello, have set plans in motion for an “encore career” in sustainable agriculture on their 25 Rock School House Road property, dubbed The Byre at Piper’s Pond.

Patterson and Costello have a bold long-term vision for the Byre, a Scottish-rooted word for a cowshed, and envision the property transforming over the next few years into a highly diversified animal and vegetable agricultural system that works with nature and its rhythms, rather than against them.

Costello said that in the silvopasture, agroforestry, and regenerative agriculture models they are basing their farm on, every living thing is meant to work together in natural harmony.

The couple pointed to an award-winning 2018 documentary about a couple who develops a sustainable farm outside Los Angeles, “The Biggest Little Farm,” as a prime example of what they are trying to accomplish together.

Agroforestry is “the intentional integration of trees and shrubs into crop and animal farming systems to create environmental, economic, and social benefits. It has been practiced in the United States and around the world for centuries,” according to the U.S. Department of Agriculture.

Silvopasture is a type of agroforestry practice that “integrates livestock, forage production, and forestry on the same land management unit,” according to the USDA.

Although these traditional and seemingly common-sense types of farming have been around for a long time, they fell out of favor during the 20th-century shift in the U.S. toward larger monoculture farms on cleared farmland. Monoculture refers to the cultivation of a single crop.

Now, the Maine Farmland Trust sees agroforestry and silvopasture as sustainable methods for continuing the agricultural renaissance in Maine that began in earnest in 2002, while at the same time returning millions of acres of former farmland to their previous plentiful bounty.

In 2017, John Piotti, then-president and CEO of Maine Farmland Trust, wrote that these sustainable agriculture practices “have a place in any overall system that aims to improve efficiency and reduce negative impacts.”

Piotti highlighted a quote from Penobscot farmer Philip Retberg that describes the intention and ultimate results, if done correctly and thoughtfully, of these regenerative agriculture practices:

“The farm itself is an ecosystem. Our crop is grass. Our harvesters are chickens and cattle and pigs and lambs and all the microbes and earthworms that live off what we do as we rotationally graze our animals. The entire ecosystem benefits. … It increases the fertility of the soil, increases its ability to capture sunlight and do that incredible photosynthesis thing that feeds all life. Our job is to steward the land with the resources we are given: sunlight, water, earth, and photosynthesis.” 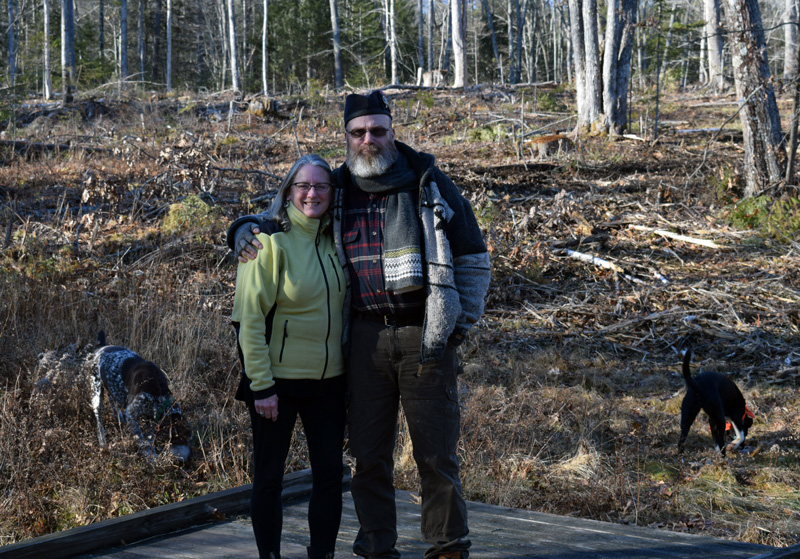 Helen Costello and Jeffrey Patterson, with two of their dogs in the background, stand on a bridge in front of the land they plan to reclaim as a pasture for Highland cattle, pigs, and Shropshire sheep. The couple is in the beginning stages of transforming their Bristol property, The Byre at Piper’s Pond, into an animal and vegetable farm that will use regenerative agriculture practices. (Evan Houk photo)

However, Piotti notes that there is no true blueprint for this type of regenerative agriculture in Maine just yet, as all farms and farmlands are unique and present unique challenges that often require innovative solutions.

Figuring out these solutions is where the real fun lies, according to Jeffrey Patterson. He describes the couple’s endeavor as “an adventure rooted in proven methods.”

Patterson and Costello, who purchased their Bristol property one year ago, have interviewed hundreds of people in the agriculture field and attended numerous workshops in preparation for setting up The Byre to be as self-sustaining as possible.

They have talked to several farmers around Lincoln County to gain tips, tricks, and best practices in all areas of agriculture and forestry in the Midcoast.

“This is a world that’s constantly changing and people are developing, and people exploring. … There’s always something to learn,” Patterson said of the agriculture community in the Midcoast.

The first step in the process involved clearing trees from the two forested parcels of land that the couple plans to use as rotational grazing pastures for pigs, Highland cattle, and Shropshire sheep.

Patterson and Costello submitted a letter to The Lincoln County News in September that explained the reasoning behind the tree clearing.

In the letter, they said they had been accused of “trashing” the neighborhood and had been victims of vandalism.

The vandalism has stopped, Costello said in an interview Dec. 13, as neighbors have come to understand the couple’s vision for the property.

She said the amount of support from neighbors and other locals after the letter’s publication was overwhelming and cemented her faith in the community.

“We have this privilege of living in this beautiful spot, and the whole Midcoast area is great,” Costello said.

“We came here for community and we’ve found this is an amazing community here on the Midcoast,” Costello continued. “And that’s brought such a high level of satisfaction. For me, I call it an encore career.”

In keeping with the theme of community, the couple welcomes anyone to contact them about coming to see the farm.

Costello said the land in the front of The Byre was used as sheep pasture as recently as the 1980s. She said the plan is merely to reclaim this land as pasture and plant nut trees and winter rye grass that can serve as crops and natural feed for the animals.

Patterson plans to create an elaborate drainage system that will include multiple ponds for water to filter through before settling in the main source, Piper’s Pond. 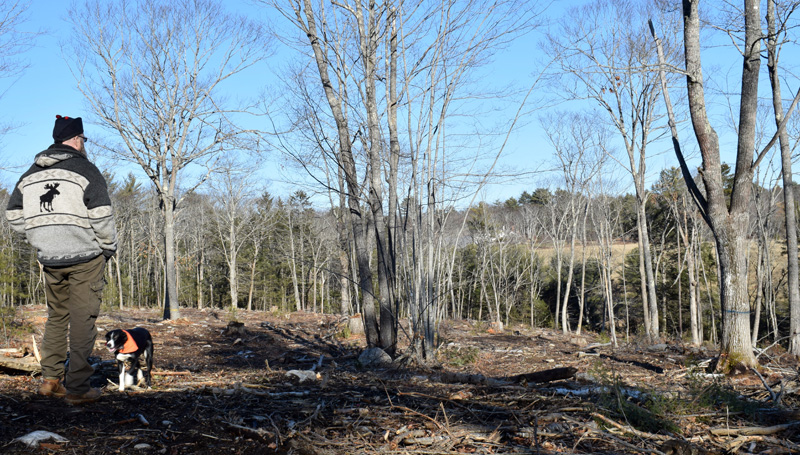 Jeffrey Patterson, co-owner of The Byre at Piper’s Pond, looks over the land he and Helen Costello plan to turn into a pasture for cattle, pigs, and sheep. The couple is turning the property into an animal and vegetable farm that will use regenerative agriculture practices. (Evan Houk photo)

The tentative plan for the other cleared pasture area will be to plant exotic fruit trees and evergreens to sell as Christmas trees.

The couple is currently raising chickens and selling free-range chicken eggs and pullet, or young hen, eggs. Various homemade relishes and jams are also available for purchase at the farm, as well as maple syrup.

Costello has started work on the vegetable field in the back of the property, planting garlic this year and a cover crop of winter rye grass to prevent erosion and add organic matter to the soil.

She said she will plant 20 or so different vegetables and will devote about 20% of her fields to dry beans, because they can be stored and sold.

Patterson and Costello first met while hiking and began dating, sharing an intense love for nature.

Patterson said that after about five or six months of dating, he asked Costello if she wanted to start a farm, knowing she had an interest in gardening.

“I’m a nutritionist and always wanted to somehow blend my nutrition background with food production and farming. So, I’ve always had a passion for growing vegetables and Jeff likes the livestock side. For a small, diversified farm, those two interests work together,” Costello said.

The two are currently self-employed, Costello as a nutritional consultant and Patterson as a surveyor, and will continue to work at these careers while setting up The Byre’s ecosystem. They also operate an Airbnb on the property that is available for rental year-round.

The next steps will likely involve bringing in pigs to graze, uproot, and naturally till the newly cleared pasture at the front of the property.

The couple is also in the process of training border collies to herd their animals.

Costello said they will continue their research and she will work on setting up distribution channels for The Byre’s crops and livestock over the winter.

Patterson said he hopes The Byre will become an agrotourism destination that people can visit and fully experience.

He understands the project will be a long-term and ever-changing endeavor, a fact he revels in.

“It’s a process, you know? We don’t expect to be there tomorrow; we expect to be there in three or four years. And quite frankly, hopefully it will just continue to be something that we create. We’re trying to create a living thing and trying to figure out how it works, and hopefully at some point in time, it starts bringing in some money,” Patterson said with a hearty laugh.

“Every time we’ve talked to people in farming, their statement was, ‘No, you don’t make a lot of money.’ But you live a lifestyle that we wish we could go back to because it’s more fun. It’s just living,” Patterson said.

“How do you eat an elephant?” Patterson said. “One bite at a time.”