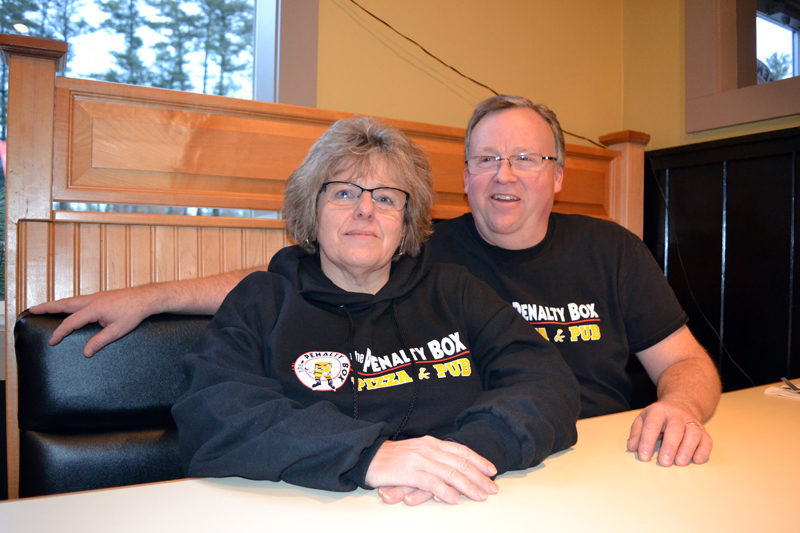 Lisa and Kent Boucher are the new owners of The Penalty Box Pizza & Pub in Damariscotta. (J.W. Oliver photo)

On Wednesday, Jan. 4, a Bristol couple became the new owners of The Penalty Box Pizza & Pub in Damariscotta – the location of their first date seven years ago.

Kent and Lisa Boucher closed on the business at 11 a.m. Wednesday.

Kent Boucher worked for Shaw’s, the supermarket chain, for 30 years, starting in the Bath store when he was in high school. He worked in the Brunswick location, spent 20 years at the Rockland store, returned to Brunswick as assistant store manager, and wrapped up his career with Shaw’s as store manager in Wiscasset.

Lisa Boucher worked in local restaurants for 26 years as a waitress, bartender, and manager at local establishments past and present, like Back Street Landing and Pine Grove in Damariscotta, Samoset in New Harbor, and Bullwinkle’s Steakhouse in Waldoboro.

More recently, she worked as a med tech in the skilled unit at Cove’s Edge in Damariscotta. She has worked in health care for 17 years.

“We’ve always wanted to have our own business and work together and be in the community, so we’ve been searching, pretty much all summer, for something to do,” Kent Boucher said during an interview at The Penalty Box a few hours after closing.

Restaurant ownership ties into their experience and skills in management and the restaurant industry, as well as their personalities.

Kent Boucher described himself as “a people person” and said they both enjoy the daily interaction with customers in the restaurant.

At Shaw’s, especially during his 20 years in Rockland, “the customers became more than customers. They became friends – people you know, people you see every day,” Kent Boucher said. He looks forward to building similar relationships at The Penalty Box.

The restaurant has sentimental meaning for the couple. Seven years ago, they met online and agreed to meet in person at what was then Romeo’s Pizza and All-Stars Sports Pub. Their first date was at a booth in the pub. “The rest is history,” Kent Boucher said.

Kent Boucher grew up in Bath and was living in Jefferson when he met Lisa. Lisa Boucher, a graduate of Lincoln Academy, is originally from South Bristol.

The Bouchers plan to pitch in wherever necessary at the restaurant, in the dining room, the kitchen, and the office.

“We plan to do it together, as a team,” Kent Boucher said.

But both intend to learn all aspects of the business so they can fill in when an employee calls in sick or if they’re short on help – even if it means one of them washes dishes for a night.

“We can’t limit ourselves to one specific area – we have to know it all and be willing to do it all,” Lisa Boucher said.

The Bouchers’ purchase of The Penalty Box comes less than two months after Gary and Jane Gravel, of Jefferson, purchased Romeo’s Pizza from Nicholas Panagos on Nov. 10. and reopened it as The Penalty Box a week later with a new menu, new signs, reupholstered booths, updated equipment, and various other improvements.

The Bouchers have been working with the Gravels to familiarize themselves with the business. Lisa Boucher has been there for three weeks and Kent Boucher for two.

Gary Gravel said the opportunity for the Gravels to sell the restaurant and the Bouchers to buy it presented itself, and it worked out for both couples.

“We enjoyed getting it up and running and getting it back on track,” Gary Gravel said. He described the Bouchers as “very nice people” who have “jumped right in” to the business. “I think they’ll do well,” he said.

The Bouchers will keep the name of the restaurant and the menu will remain largely the same.

They do plan some changes. “We’re going to add more daily specials and we hope to add a soup bar,” Lisa Boucher said.

Like the Gravels, the Bouchers want The Penalty Box to be a classic sports pub where the big game (or race) is always on.

The Bouchers also plan to work in other kinds of entertainment – live comedy and music, karaoke, a paint night, sports trivia, and a “Damariscotta’s Got Talent” night in March.

They’ll keep the schedule light for the next few weeks, however, to ensure nothing conflicts with the New England Patriots’ playoff run.

“Our main focus is to make it a place where a family can come in and have a nice meal and just enjoy themselves,” Kent Boucher said.