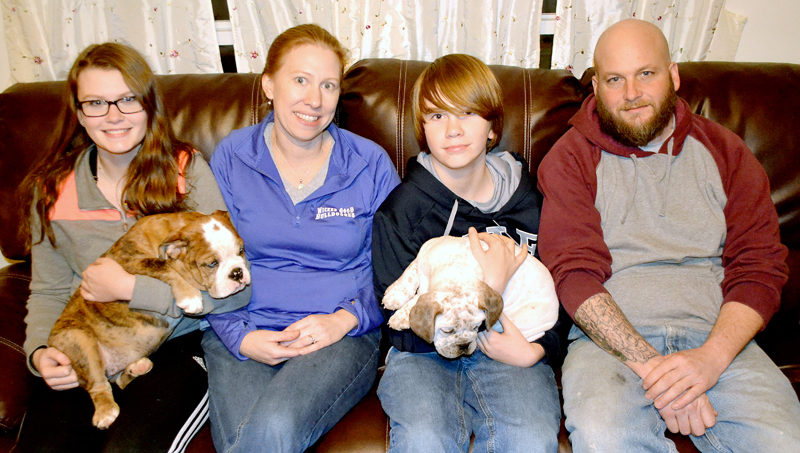 A breeder of olde English bulldogges on Hanna Lane in Bristol raises the animals in a family atmosphere and has earned recognition for its work. After eight years in business, Wicked Good Bulldogges is gaining new recognition for breeding the mascot of Yale University.

Jessica and Pete Seiders own Wicked Good Bulldogges. Jessica handles most of the business, while Pete, a full-time lobsterman, works behind the scenes. Jessica and Pete grew up in the area and graduated from Lincoln Academy in 1997 and 1994, respectively.

Jessica’s father, Michael Weatherhead, bred Australian sheepdogs at the family’s home in Jefferson when she was growing up. She has wanted to become a dog breeder ever since, she said.

The couple married in September 2006 and began to research dog breeds for their kennel. One of the breeds the couple looked into was the English bulldog – a different breed from the olde English bulldogge. 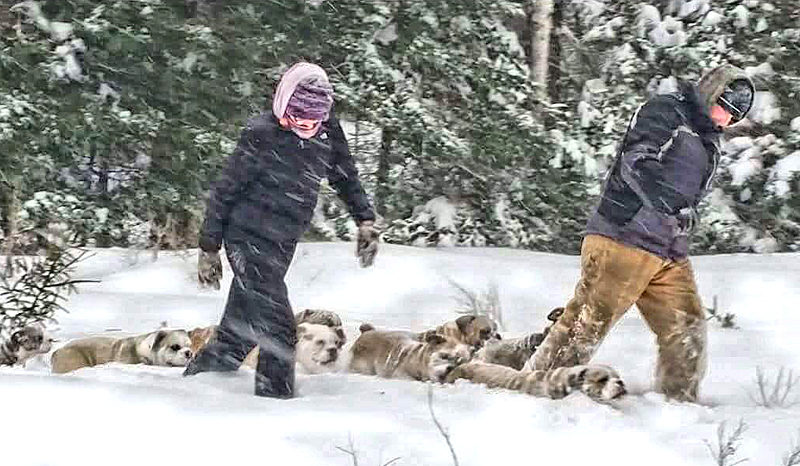 Jessica and Pete Seiders walk some of their olde English bulldogges through the snow at their Bristol home. (Photo courtesy Jessica Seiders)

“We really liked the English, but there’s a lot more that goes into breeding them,” Jessica said. “They have to be artificially inseminated. They can’t give birth naturally, so they have to have C-sections, and they tend to produce smaller litters.”

“Typically, they’re physically able to do more than the English,” Jessica said. “The olde English are more naturally able to do things like running, swimming, and just being a dog without putting as much pressure on their hearts.”

For the better part of three years, Jessica and Pete learned as much as they could about the breed through conversations and online message boards before getting their first dog. 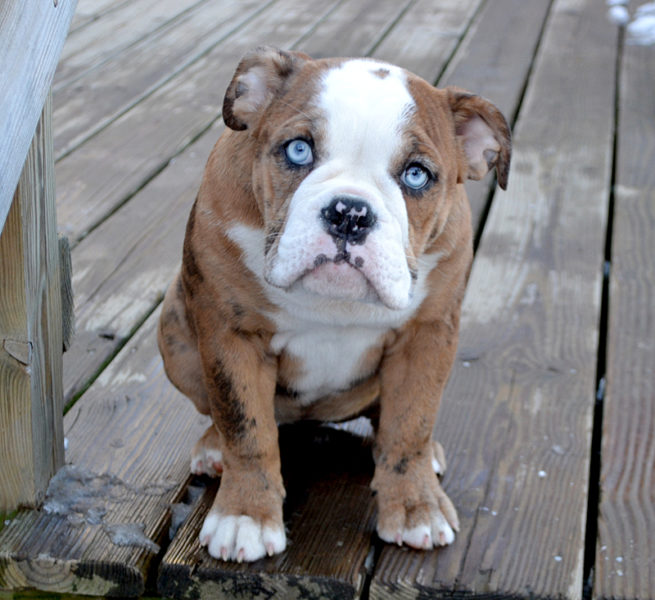 Mary is one of the olde English bulldogges bred at Wicked Good Bulldogges in Bristol. (Maia Zewert photo)

When it comes to breeding, the secret is in matching and balance, Jessica said. Wicked Good Bulldogges breeds for color, pedigree, temperament, and other factors.

“It’s not just about putting two of the breed together. It’s about taking the characteristics of two dogs and putting them together for the best possible outcome,” Jessica said.

Wicked Good Bulldogges registers all of its dogs with the National Bulldogge Association.

Wicked Good Bulldogges also works with other breeders in an effort to breed dogs with strong bloodlines. If the Seiders feel their dogs are lacking in any particular characteristic, they will contact another breeder for help, Jessica said.

“There’s really a community among breeders, which is just so incredibly helpful,” Jessica said. The breeders understand what other breeders go through, and they learn from each other.

Jessica, Pete, and their children, Brooke and Ashton, take care of the dogs together. The dogs are exercised each day, walking and running on the Seiders’ property, and every night the dogs come inside the house to sleep in their own beds.

Each of their dogs goes through obedience training, is house-trained, and is up to date on shots when it goes to a new home, Jessica said. In addition, the dogs have grown up in a home with children and are kid-friendly.

“Socialization is huge for these dogs,” Jessica said. “I think that’s something that sets us apart as breeders, because we really raise these dogs as a part of our family.”

That bond makes placing the dogs a hard part of the job.

“It can sometimes be the hardest thing to do, to place some of these dogs,” Jessica said. “But at the same time, we remind ourselves that the people who are bringing these dogs home are going to give them an amazing, loving home with a ton of one-on-one attention.”

Wicked Good Bulldogges has received honors during National Bulldogge Association shows. The Seiders have traveled to Tennessee for shows, and have co-hosted shows in Massachusetts.

In fall 2016, Jessica received a surprise in the form of an email from the Yale Athletics Department saying the school was interested in having one of the Seiders’ dogs become its new Handsome Dan. 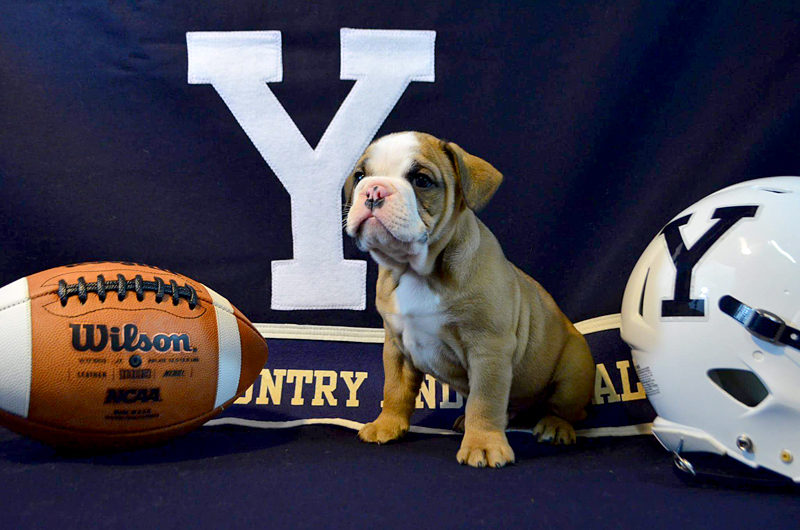 A real bulldog serves as Yale University’s mascot. In 1889, Andrew Graves, a football player for the university, purchased a bulldog from a New Haven blacksmith for $5, according to the Yale website.

The pup was embraced by students. Seventeen dogs have assumed the title since, including the dog from Wicked Good Bulldogges.

Yale launched its search for Handsome Dan XVIII after his predecessor passed away Aug. 11, 2016.

Jessica let the email sit in her inbox for a few days, thinking it might be a scam. After hearing that other breeders had been contacted and learning that the request was legitimate, she responded.

After a nationwide search, Yale narrowed the field to three breeders on the East Coast, including Wicked Good Bulldogges.

“At the time, we didn’t really know that there were others in the running,” Jessica said. “We just treated them as another prospective buyer and let things play out.”

On Sept. 23, a new litter of puppies was born at Wicked Good Bulldogges. The first five puppies were girls, and the last two were boys. Soon after, Yale informed the Seiders that one of the male puppies would be the next Handsome Dan.

The dog was named Walter, in honor of Walter Camp, a Yale football legend. Camp played for and coached the team, and was inducted into the College Football Hall of Fame as a coach in 1951.

Once Walter was old enough, the Seiders journeyed to New Haven, Conn., to hand the pup off to his caretaker. Kevin Discepolo, a 2009 graduate of the university and its current assistant athletic director of facilities, operations, and events, serves as Walter’s caretaker.

“That’s a huge plus for us, knowing that he has a loving home,” Jessica said. “(Walter) does not live on campus and stay in the locker room; he has a dad and a home.”

While the Seiders were on the Yale campus for a tour, students hoping to get a look at the new Handsome Dan constantly approached them.

“Everyone wanted a picture of him, and he handled it so well, and was just so calm,” Jessica said. “It’s really heartwarming to see how much they love him.”

Soon after Walter made the campus his home, Yale defeated its rival, Harvard University, during the annual Harvard-Yale football game, snapping a nine-year losing streak.

The Seiders are able to keep up with Walter’s adventures through the Handsome Dan XVIII Instagram account. Similarly, most owners who purchase dogs from Wicked Good Bulldogges send the Seiders photos or friend Jessica on Facebook.

“Not only do you get to see how a certain pair or breeding played out, but you also get to see these dogs grow up and mature in loving homes,” Jessica said. “For me, that’s one of the best parts.”

For more information, go to wickedgoodbulldogges.com.