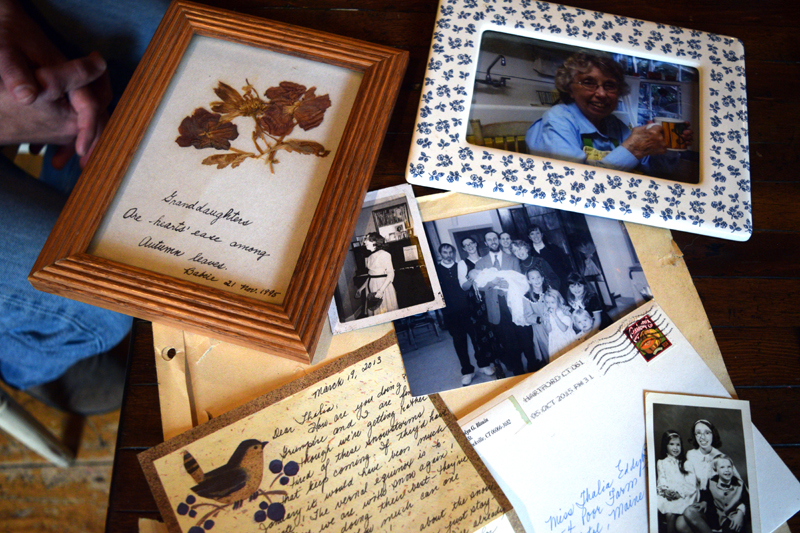 Family photos of Carolyn Blouin, with a gift and a postcard from Blouin, at her son and daughter-in-law’s home in Bristol. (Jessica Clifford photo)

A Bristol family remembers the victim of a fatal 2017 wreck in Dresden, their mother, mother-in-law, and grandmother, as a bookworm with a generous heart, a take-charge personality, and “vivacious” energy.

A nurse and teacher’s assistant in her professional life, Carolyn Blouin, 75, of Connecticut, was a mother of four, a grandmother of 16, and a volunteer in her church and local historical society.

Patrick J. Shorey, 26, of Waterville, was allegedly under the influence of multiple drugs when the car he was driving crossed the centerline of Route 27 in Dresden on June 2, 2017 and struck the Blouin vehicle, according to police accounts of the crash. Carolyn Blouin died at the scene, while her husband of 53 years, Charles Blouin, was badly hurt.

More than a year later, a Lincoln County grand jury indicted Shorey on several criminal charges, including manslaughter. He has pleaded not guilty and will make his next court appearance Jan. 14.

To most readers of the initial crash coverage, the Connecticut couple’s local connection was not readily apparent – perhaps they were two of the many seasonal visitors to the area.

The Blouins, however, have strong ties to the area. Their son, daughter-in-law, and seven grandchildren, the Eddyblouin family, live in Bristol.

The Blouins were driving home to Rockville, Conn. at the time of the crash, according to their daughter-in-law, Allison Eddyblouin.

Due to Carolyn’s fear of the Bath bridge, the
couple always took Route 27 to Dresden, then got on Interstate 295 in Richmond instead of using Route 1 to travel south.

Prior to the crash, the Blouins were staying at the Newcastle Inn while visiting the Eddyblouins.

The visit was to witness the first Holy Communion for grandchild Blaise, now 8, and the graduation of now-19-year-old Thalia from Lincoln Academy, and to attend the Eddyblouins’ annual Memorial Day barbecue.

The couple would visit the family in Bristol once or twice every year, Allison said.

The Eddyblouin children referred to her as Babcie, the Polish term for grandmother.

The aftermath of Carolyn’s sudden death was devastating, not least of all because of Charles’ injuries. John Eddyblouin, her oldest son, had to tell Charles about Carolyn’s death because he had no memory of the wreck.

Charles could not attend Carolyn’s funeral in Rockville; instead, he watched a livestream from a computer in the hospital. 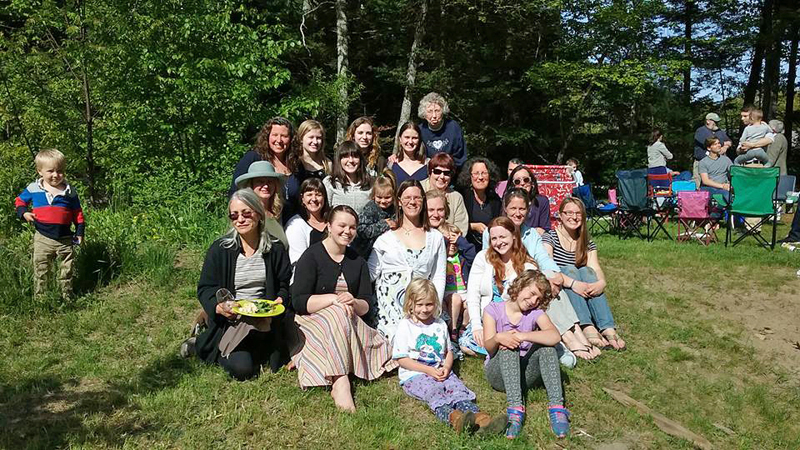 Carolyn Blouin (back right) poses for a photo with the Eddyblouin family during the family’s annual Memorial Day party in 2017, days before her death in a head-on car crash. The driver of the other car was allegedly under the influence of drugs and faces several criminal charges, including manslaughter. (Photo courtesy Allison Eddyblouin)

Charles’ injuries included a broken femur, hip, forearm, ribs, and thumb, and a crushed elbow. He sustained the injuries to the left side of his body.

He had surgery to place pins in his elbow and hip, and to insert a rod to repair his femur. He has undergone two surgeries to rebuild his arm, Allison said.

After the crash and 2 1/2 weeks in the hospital, Charles lived with the Eddyblouin family for six months. Every week he had in-house physical therapy and occupational therapy, in addition to appointments in Portland.

He started to get around with a walker, then a cane. Today, he walks without either.

“It’s really hard to knock that guy down,” John said.

During Charles’ recovery, family, friends, and strangers supported the family with food and gas cards, among other things.

“A lot of the time we just didn’t know who all this stuff was from,” John said.

A friend, Bill Murdock, assembled a crew to build a ramp and deck to make the entrance to the Eddyblouin home more accessible.

“Everybody just fell into, ‘What can I do to help?’ And they did. Everybody found the best ways to help,” Allison said.

Charles now lives back in Connecticut, in the same house he shared with Carolyn.

Charles and Carolyn were near-opposites, according to John. Carolyn was outgoing, Charles more reclusive, unless he was in a group. She loved books and he loved music. He once hoped to become a concert pianist.

Carolyn graduated from the St. Francis School of Nursing and became a registered nurse. She later received her bachelor’s degree in American history from the University of Saint Joseph.

She was a teacher’s assistant at Northeast School in Rockville and taught middle school at St. Bernard Catholic School, in Uncasville, Conn.

For decades she was a camp nurse for the Hartford County 4-H Camp, a summer camp in Marlborough, Conn. At camp, she was always referred to as Nursey Blouin. 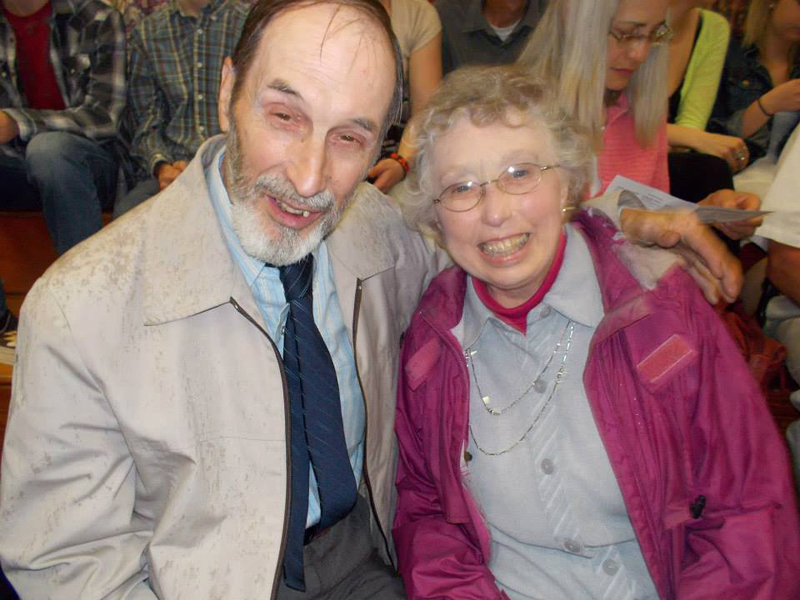 A devout Catholic, she was an organist and lector for her local church.

She had a passion for history and volunteered at the Vernon Historical Society. With Jim Ashe, she co-authored the book “Remembering Those Who Served: A History of the War Memorial Tower at Fox Hill, Rockville, Connecticut.”

She was “very generous with her love,” Allison said.

She was known for sending letters, cards, and postcards for any occasion.

“My sister had to take over afterward because everybody got a card,” John said.

John described his mother as a “bookworm.” On one of the last nights she was at the Eddyblouin house, the family read three children’s books: “Seven Silly Eaters,” by Mary Ann Hoberman; “It Was a Dark and Stormy Night,” by Janet and Allan Ahlberg; and “Alpha Beta Chowder,” by Jeanne Steig.

Soon after, she sent postcards to her friends back home. On one of the postcards she wrote: “When I get home, ask me about the best day of my life.” The postcards arrived at her friends’ homes after she had died.

“I flatter myself to think it’s that,” John said. Allison finished the thought: “It’s the books.”

Shorey’s indictment and arrest after a long investigation caused the Eddyblouins to “emotionally revisit” the time of the crash, they said in a letter to the editor after his arrest.

“We lost so much,” they wrote. “Carolyn was far from the natural end of her life.”

The Eddyblouins included two photos of Carolyn with their letter – an antidote, they said, to Shorey’s “disturbing” mugshot. In the mugshot, Shorey wore a smirk and a T-shirt with the song lyric “Every little thing is gonna be alright.”

“If I could talk to him, I’d just say, ‘It was a big mistake what you did,’” John said. “I guess I don’t feel that he has had that revelation; maybe he has.”

“On an emotional level, it made sense at some point that it might even be worth it for us to lose Carolyn, if he could have a successful life, whatever successful means,” Allison said. “For us, successful means having a strong marriage and raising our children well. I don’t mean make a million dollars, but contribute to society instead of tearing it down.”

With the pain of loss comes memories of the moments the family shared with Carolyn, the times they will miss.

“Walking through life, I think, ‘Here’s a book I should point my mom at, and of I course I can’t talk to her about it, I can’t find out if she’s (read) it,” John said. “There’s also my kids. They definitely got to know my father a lot better through this, which is a positive, but now they’ve lost the benefit of their grandmother.”

“I miss the phone calls,” Allison said. “I would call her up in the middle of my day … whenever the kids did something particularly funny or impressive, I would call her up, probably a couple times a month. We would laugh together.”

“We lost a lot when we lost her,” Allison said.