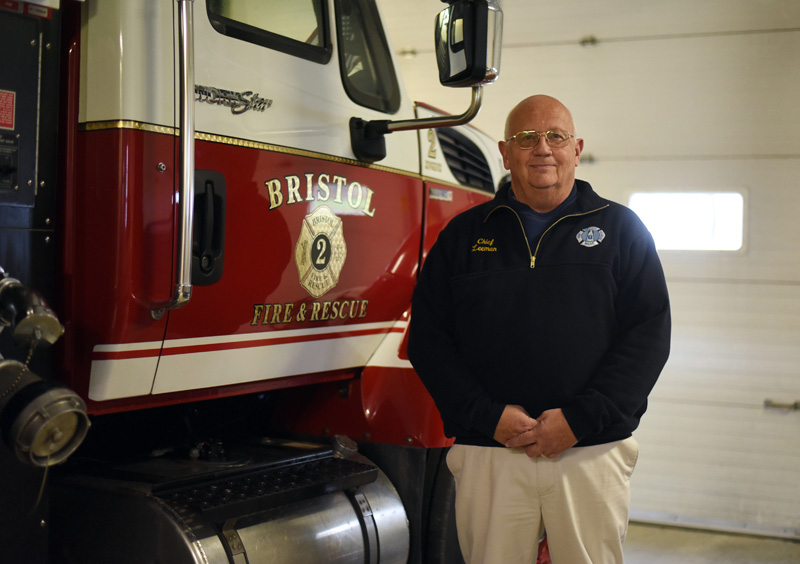 Bristol Fire Chief Paul Leeman Jr. stands next to a fire truck in the Round Pond station Oct. 24, 2018. Leeman will retire at the end of April. (LCN file photo)

Bristol Fire Chief Paul Leeman Jr. will retire at the end of April.

Leeman said he is retiring “because the time is right” for him, while he is healthy and able to do the projects he wants to do. “I have children and grandchildren, and I want to be a part of their lives,” he said.

The Bristol Board of Selectmen discussed plans to find Leeman’s replacement Wednesday, Jan. 6. Town Administrator Chris Hall was going to meet with the department’s officers to talk about the process the following week.

Leeman became chief 11 years ago, in January 2010. The job was a part-time role at the time, but he became the town’s first full-time fire chief after voters approved that change in 2018.

Hall recommended that the town form a search committee  comprised of department members and other residents, especially those who have experience with firefighting. He said he knows of two Bristol residents who have backgrounds in firefighting in other New England states.

“Fortunately, Paul’s given us to the end of April,” Hall said. “In one sense, there’s no critical urgency, and we could go into the beginning of summer.”

He said the town could operate with an assistant chief serving as acting chief for a month or two if necessary. “I believe that there are certainly people in the department, more than one, that may be interested in putting their hat in the ring,” he said.

Hall plans to have the search committee help with the wording for an advertisement. He said he hopes to “get buy-in” from department members every step of the way.

Chad Hanna, chair of the board of selectmen, said Leeman has “done a great job” and his service is much appreciated.

Leeman hopes to see the department nominate his successor. “It would be healthy if we can nominate from within the members of our department, then take that recommendation and let the selectmen vote on it,” he said. He has sent his job description to all members of the department.

If the approach of nominations from the department does not work, Leeman agrees that the town will need a search committee. In that case, he thinks the committee or the department’s officers need to fine-tune the job description.

“We don’t want just an 8-to-5 chief,” Leeman said. “And it should be someone from Bristol.”

The selectmen plan to conduct the 2021 annual town meeting by referendum, or secret ballot, rather than in the traditional open format, due to COVID-19 concerns.

Bristol Consolidated School recently reported its first case of COVID-19, forcing about 25 people to quarantine, according to Hall. As of Jan. 6, there were 177 active cases in Lincoln County .

Hall had asked Town Clerk Rachel Bizarro to check with the Maine Municipal Association about the legalities and the process for a town meeting by referendum.

Bizarro said the town should be able to have the vote at BCS on Monday, March 15.

Bizarro consulted other towns that have town meetings by referendum and suggested that the town work with a vendor, Election Systems & Software LLC, to provide ballots that can be scanned at a reasonable cost.

The town would need to submit the content for the ballots by Feb. 3, the day after the last budget committee meeting.

The budget committee has moved its meetings earlier so it can make recommendations in time for the printing of the ballots.

Hall suggested that residents watch the budget committee’s meetings on Zoom on Feb. 1 and 2 and submit questions.

The department is projecting $367,550 in revenue. The department brings in most of its income from admission fees and does not receive tax revenue.

In the area of capital expenses, the department plans to replace Parks and Recreation Director Lara Sargent’s vehicle this year. Pendleton said the cost to repair the current director’s vehicle makes it more practical to replace it. Another capital expense will be the shingling and painting of the bell tower at Pemaquid Point Lighthouse Park.

The department may repair the roof of the Old Rock Schoolhouse if it can obtain a grant for the job.

The department will waive the $5 fee for the renewal of season passes for Bristol residents and taxpayers next year. The commissioners hope residents will make a donation in place of the fee.