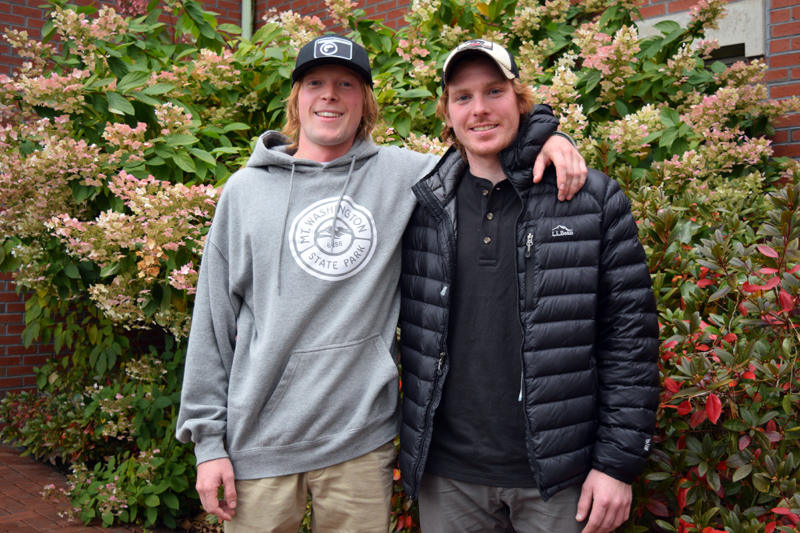 Dalton Leeman (left) and Bo McLain, of Bristol, hiked the entire Appalachian Trail from April to October of this year. (Jessica Clifford photo)

A pair of lifelong friends from Bristol found freedom in hiking an average of 20 miles a day – 352 football fields of all kinds of terrain – for six months this year.

With limited hiking experience, Bo McLain, 26, and Dalton Leeman, 25, started their hike of the Appalachian Trail on April 10 at Spring Mountain, Ga., the southern terminus of the trail. They ended their trek Oct. 2.

According to the Appalachian Trail Conservancy, the friends are just two of over 20,000 people to complete the nearly 2,200-mile hike since 1936. The trail runs through 14 eastern states, from Maine to Georgia.

McLain and Leeman lived a mile apart growing up. They both attended Bristol Consolidated School and Lincoln Academy, then Maine Maritime Academy for college.

McLain said he had never experienced an overnight hike prior to setting out on the Appalachian Trail, while Leeman said his longest were weekend hikes. Most of their previous trips had been to the White Mountains of New Hampshire.

Leeman read a book called “How to Hike the Appalachian Trail” and told McLain about it.

“I was unsatisfied with my job and I quit and I had this other plan,” McLain said. “Then he mentioned, ‘Hey, I’ll quit my job and we can do the Appalachian Trail’ and I thought that sounded like a good idea, a good challenge.”

They made the trip south only a short month later, after reading articles and watching YouTube videos to get ready.

Recalling their experience, they laughed at their lack of preparation.

“We didn’t really know what to expect,” McLain said. “We never tested our gear out hiking. We went out behind my house for probably a half-mile and came back and said, ‘Yup, it feels good.’”

If they did it over again, the friends would prepare and budget better.

One of the most important items to have on the hike is the right shoes. Each of them went through three pairs.

According to McLain and Leeman, everyone who attempts to hike the entire trail starts in March or April, typically at the southernmost end of the trail.

“Some people you see along the whole way; some people you choose to stay close with,” McLain said. “You make some good friends along the way, so you adopt their pace, or make sure to meet up in certain towns when you resupply on food.”

However, there were times hikers would not see each other for months.

“It would actually happen quite a bit where they say, ‘We started the 11th,’ and you’d never see them until 10 states (in),” Leeman said.

The friends would vaguely plan three or five days ahead, but did not follow their plan closely.

“You’d be surprised by how many people do that – go with the flow. Get out there and figure it out,” McLain said.

Every few days, after camping in the woods, they would leave the trail and go to a nearby town.

While in the towns, they would sleep in a hotel for a night or a few, eat a hot meal, do laundry, take a shower, and restock with food and water.

After a couple days in town, they said, it becomes harder to go back to the trail.

However, Leeman said it is not as dangerous on the trail as people might think. After a while, they forgot about the wildlife around them.

“Out in the woods you start to feel more comfortable, less anxious,” McLain said. “There’s not a lot of people around.”

While in the woods they would eat beef jerky, Clif bars, freeze-dried foods, trail mix, candy bars, soda, and ramen. 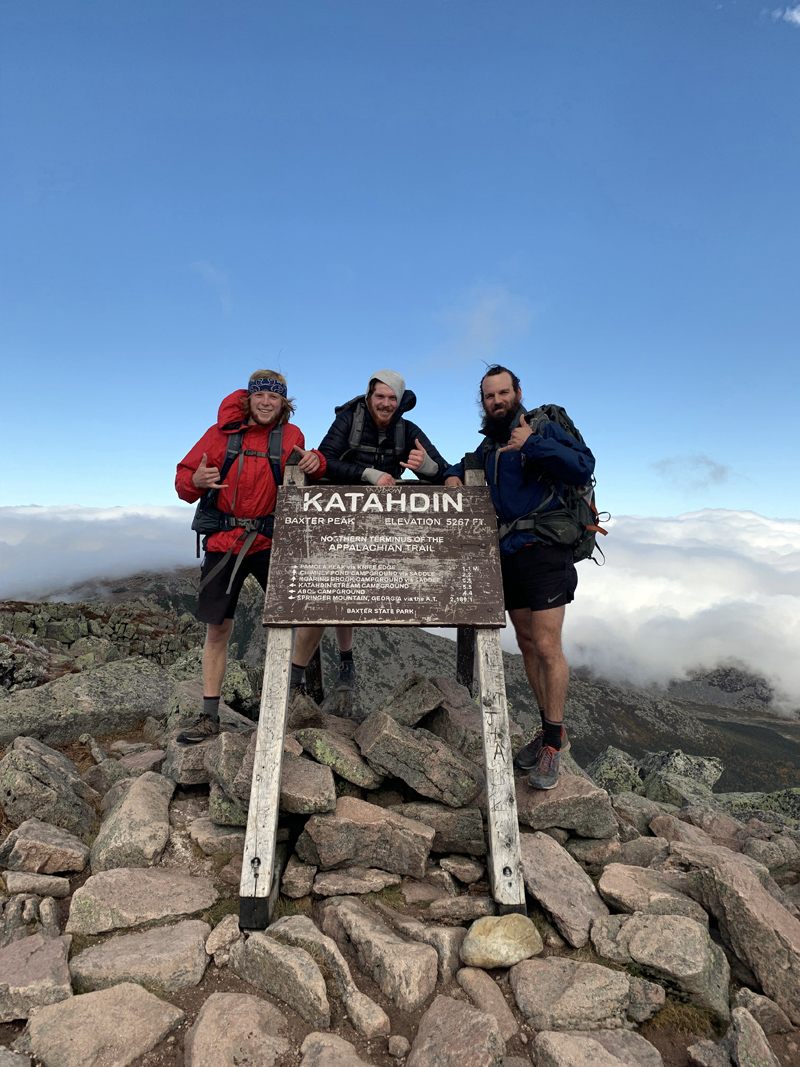 From left: Dalton Leeman and Bo McLain, of Bristol, and fellow hiker Tim Lawrence, of New Jersey, pose for a photo at the peak of Mount Katahdin upon completing their 2,200-mile hike of the Appalachian Trail. (Photo courtesy Bo McLain)

Since a hiker wants to eat as many calories as possible, Leeman said, “You run out of options; there’s only so much you can bring.”

“When you’re out there, you’re at a calorie deficit every day,” McLain said. “You’re not eating enough food. You don’t feel the same as when you get a nice warm meal.”

Luckily, the community around the trail is helpful to hikers. People set up tables, give out food, and sometimes offer hikers their house to stay for a day or two.

For Leeman, the hardest part of hiking the Appalachian Trail was the mental aspect. He said it rained for four days in Virginia.

The hardest part is “knowing it’s a marathon, not a sprint, and you got to get up sore and tired every single morning and just know you have to hike 20-whatever miles,” he said, on top of dealing with the bugs and weather.

It got very cold in September, while they were in New Hampshire and Maine. All they could do to keep warm was keep moving.

While most days they could hike 20-25 miles, in places with harsher terrain, such as New Hampshire and Maine, they sometimes walked as little as 7-8 miles.

Although the friends said New Hampshire and Maine are the hardest to hike, they are two of the most beautiful states to hike.

After a while, though, McLain said they would get “tunnel vision.”

“Half the time we didn’t stop,” Leeman said. “We’d see so many views we just kept going.”

Throughout their time on the trail they saw various wildlife, such as rattlesnakes and “weird creepy crawlies,” Leeman joked.

In Virginia, the state with the most trail at 554 miles, they saw wild ponies in Grayson Highlands State Park.

“They are wild ponies that come up to you. They’ll lick the salt off you and chase you around,” McLain said.

Until the journey, he had never seen a black bear in person. On the trail, they got their fix by seeing about 25 altogether.

One time in Virginia they had a close encounter with a family of bears.

They walked upon two cubs, just 5 yards away from them. They climbed up two trees next to the trail, McLain said.

One began making a squealing noise.

Leeman heard loud breathing in bushes opposite the cubs. They were between the cubs and the mom.

They slowly backed away and stayed there for a few moments before pushing forward in the direction they were heading, McLain said. The mom waited behind the bushes.

When they hiked Mount Katahdin, the northern terminus of the trail in Maine, McLain’s brother picked them up to take them home.

McLain was most excited for warmth when he returned, while Leeman wanted good food and sleep.

However, the friends “never remember the bad days,” Leeman said.

Although it is a huge commitment and takes a lot of money to complete, Leeman said they felt like kids without any rules on the trail.

McLain’s advice to others around his and Leeman’s age is, if they have the money, they should take the chance to do what they have longed to do for years.

“You don’t just have to settle for an ordinary life and just work your job you’re unsatisfied with every day for years,” McLain said. “You can just break out of that and go out and do something like this – have complete freedom for a short amount of time.”