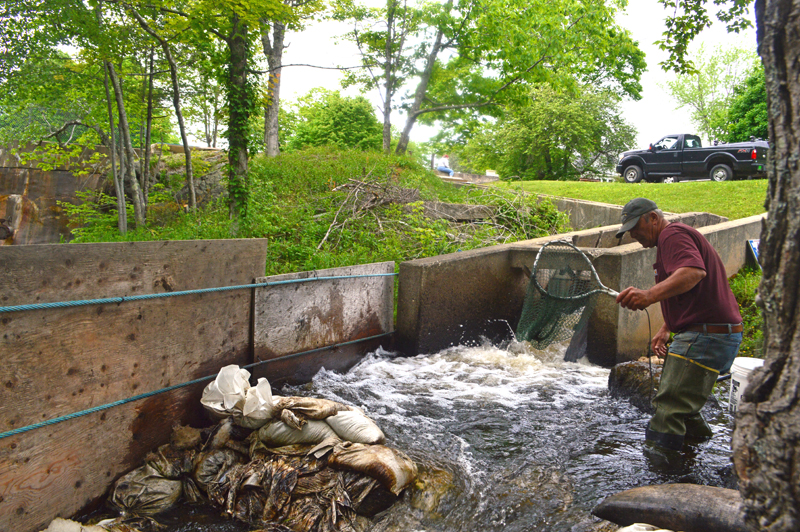 Rick Poland, a member of the Bristol Fish Committee, nets alewives at the base of the Bristol Mills Fish Ladder to collect measurements and scale samples. (Alyce McFadden photo)

The Bristol Mills fish ladder is in the midst of a banner year, though this may be its last. Well over 100,000 alewives have ascended the ladder thus far in the migratory season, stretching the aging ladder’s capacity and working volunteers hard.

Although Jay Crooker, a member of the Bristol Fish Committee, hesitated to estimate precisely how many alewives have passed through the ladder, he noted that one volunteer counted an all-time record of 2,528 in a single 30-minute period on May 28.

“That is a number that is very hard to keep up with a clicker,” Crooker said.

This is a “surge year” for alewives across the Midcoast. A couple towns over, the Damariscotta Mills Fish Ladder has counted over a million alewives already this year. The influx of migrating fish occurs every two or three years as a result of periodic increases in upstream spawning.

The Bristol Mills ladder has been operating since 1974 and can accommodate, at most, 200,000 alewives in a season, according to Crooker. To supplement the ladder’s strained capacity, a “bucket brigade” of volunteers carried fish manually onto the other side of the ladder May 31.

“We got like 15 people together with 5-gallon buckets and we gave the fish a free ride up the ladder,” Crooker said. “And that’s just not sustainable year to year.”

Before the start of each season, the fish committee erects a wire fence at the base of the Bristol Mills Dam to guide the alewives into the fish ladder’s entrance. The makeshift infrastructure requires constant upkeep by the committee’s six volunteer members.

“All of us come down three or four times a day to clean it out,” said Alison Lee, the committee’s volunteer secretary,

The fish committee hopes to have a modern ladder, similar to the one in Damariscotta Mills, installed by the start of next year’s migratory season. So far, the town has secured $550,000 in funding, but will need more to complete the project in full.

In addition to lightening volunteers’ load, the new ladder would enable the town to issue permits for the commercial harvest of alewives. The fish is popular as lobster bait.

“To do that we would need to have a run a couple times larger than what we currently can have,” Crooker said.