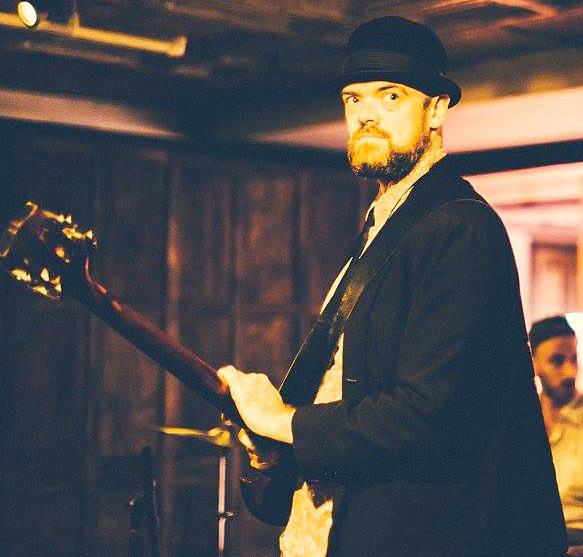 A Lincoln County native who works as a musician and producer in Brooklyn, N.Y. will teach a kids rock-and-roll camp in Newcastle from Aug. 1-5.

Stu Mahan, 35, formerly of Bristol and Damariscotta, has taught rock camps around the state with the Maine Academy of Modern Music, but this camp will be the academy’s first in Lincoln County.

In Mahan, the campers will learn from a professional musician who has toured North America, played legendary venues, and shared the stage with household names.

Before those accomplishments, however, he was just a local kid who couldn’t wait to join the school band.

He was born in Damariscotta and grew up in Bristol, attending Bristol Consolidated School.

As a boy, he was often around music. His grandfather, the late Bob Strong, of Damariscotta, was a piano player, and he enjoyed a “solid record collection” belonging to his parents, Stuart Sr. and Betsy Mahan.

“I started taking band as early as I could, in the fourth grade,” Mahan said. He began with trumpet and later learned to play drums.

During his freshman year at Lincoln Academy, he picked up bass guitar. He took private lessons with local jazz musician Jack Tukey throughout high school.

While at L.A., he started his first band with a friend, Adam Reny.

“We had three or four originals,” Mahan said. “We played a couple of classic rock tunes, some Jimi Hendrix, some Cream, some Allman Brothers.”

Early on, Mahan knew he wanted to become a professional musician.

Mahan graduated from L.A. in 1999 and attended the University of Maine at Augusta, graduating with a bachelor’s degree in jazz and contemporary music performance.

“Give me a crumpled-up paper towel and I’ll figure out how to make music with it,” he said.

Mahan has played with many bands in Maine. Locals are most likely to know him for performances in the area with the Portland reggae band Royal Hammer and the ‘80s cover band The Awesome, as well as his work with Spencer Albee and Will Mallett.

On a national stage, Mahan’s most high-profile affiliations have been with The London Souls, a New York City-based rock-and-roll band; and with the Kansas City blues artist Samantha Fish.

Mahan was a member of The London Souls from 2012-2015, touring around the U.S., Canada, and Mexico, and even playing in Jamaica and on the “Kid Rock cruise,” a sort of floating music festival.

“It’s a week-long party,” Mahan said. “We go to a private island off the coast of the Bahamas, which (Kid Rock) named Redneck Paradise.”

Mahan cites performances at Beacon Theatre in New York City and The Fillmore in San Francisco as career highlights, as well as opening for or sharing the stage with The Black Crowes; Warren Haynes, of The Allman Brothers Band and Gov’t Mule; David Hidalgo, of Los Lobos; and the Tedeschi Trucks Band.

These days, Mahan plays with several acts while back in Brooklyn.

He frequently performs with the Nat Osborn Band, which the band’s website describes as combining elements of soul, funk, indie rock, and jazz; and Osborn’s folk group, Hawthorne. He performs with Eric Krasno and appears on his new album, “Blood From a Stone.” Mahan describes Krasno’s music as rock with a jam band background. Mahan also plays with a world music-influenced band, Low Mentality, and in the house band at Duane Park, which he calls “New York City’s best burlesque house.”

Mahan also produces other musicians’ albums. He likes to bring friends from New York to Maine, where they record at the Rustic Overtones’ studio in Portland. The studio time is more cost-effective and more flexible, which can lead to better results.

Mahan enjoys and plays music from a huge range of genres – from jazz standards to trap music – but “I really like rock-and-roll and reggae,” he said. “Those are the two genres I listen to the most.”

If he’s not listening to music he needs to learn for a show, he lists the hip-hop artist Kendrick Lamar, the dub artist Scientist, and Neil Young among his current favorites.

He likes “old blues” and New Orleans music like Dr. John and The Meters. Another current interest is Brazilian music.

He also listens to a number of Maine artists, and wants more people to do the same.

“There’s a lot of great music coming out of Maine and I think it’s really important for people to listen to it, because it’s part of the culture of Maine,” Mahan said.

Mahan thinks it’s important for people to take in live music in general.

“When you read the news and watch the news every day, politics and all these things are set up to try to divide you,” he said. “If you go to a bar or you go to a concert, all that stuff is put away, because you’re all there for the same interest. All those walls that are built up to divide are broken down and you can actually have a good time and enjoy each other’s company.”

Mahan has been playing a few local gigs this summer. He will perform with the Maine blues artist Samuel James at the Portland House of Music on Saturday, July 30.

The Maine Academy of Modern Music’s Lincoln County Rock Camp, for ages 11 and up, will meet at The Second Congregational Church in Newcastle from 10 a.m. to 3:30 p.m. daily from Aug. 1-5. Tuition is $300.

The nonprofit academy’s mission is to provide Maine youth with the discipline, freedom, and guidance to appreciate the thrill of making contemporary music, instilling in them the power of self-expression.

For more information or to register, call 899-3433 or go to maineacademyofmodernmusic.org.