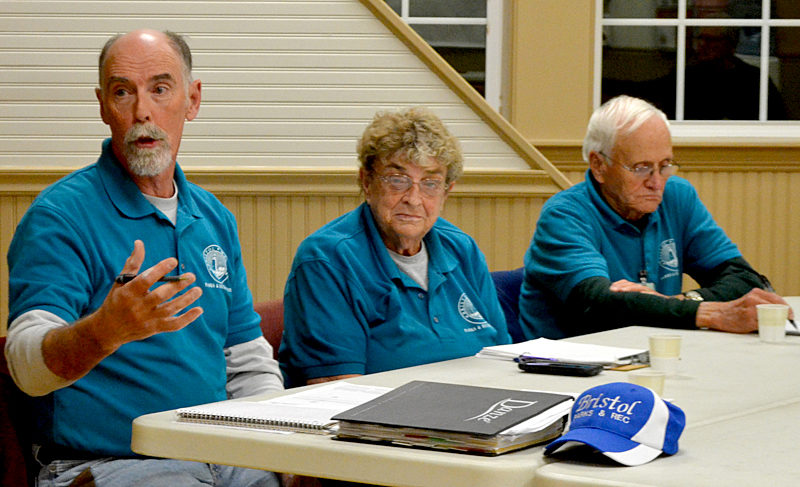 From left: Bristol Parks and Recreation Commission Chairman Clyde Pendleton Sr. discusses the commission’s proposal to create a position of parks and recreation director as Comissioners Sandra Lane and George Sawtelle look on during a meeting at the Bristol town office Tuesday, Oct. 25. (Maia Zewert photo)

The Bristol Parks and Recreation Commission presented its proposal to create the position of parks and recreation director during a public information session at the Bristol town office Tuesday, Oct. 25.

Commission Chairman Clyde Pendleton Sr. originally came to the Bristol Board of Selectmen in April to discuss the possibility of adding the position. The director would run the day-to-day operations of the park. The selectmen suggested the commission create a job description and present the position as part of its budget for the upcoming fiscal year.

Pendleton, alongside Commissioners Sandra Lane and George Sawtelle, presented a rough draft of the job description during the Oct. 25 meeting.

The parks director, in conjunction with the parks commissioners, would be responsible for compiling and administrating the commission’s budget. The director would also submit regular reports to the commissioners for review.

The director would develop administrative procedures for the commission and ensure adherence by parks and recreation staff. The director would have disciplinary power, but not the power to hire and fire parks employees, Pendleton said.

The director would inform both the commissioners and the general public about parks and recreation activities and write a report about the year’s activities for the annual town report.

The director would serve as a liaison between the commission and parks staff, the town of Bristol, and the public.

The commissioners would have authority over the director, Pendleton said.

The position would be full-time from April 1 to Nov. 1 and part-time the rest of the year, Pendleton said. The commissioners are discussing an hourly wage around $20-$23.

Richard Francis, a member of the Bristol Budget Committee, asked what the new position would add to the department.

In addition, the director could write grants for the commission, which relies solely on the revenue it generates and does not receive taxpayer dollars, Pendleton said.

“If this person is worth their salt and can write grant applications, this position could pay for itself,” Pendleton said.

The Bristol Parks and Recreation Commission will continue to work on the draft of the job description.