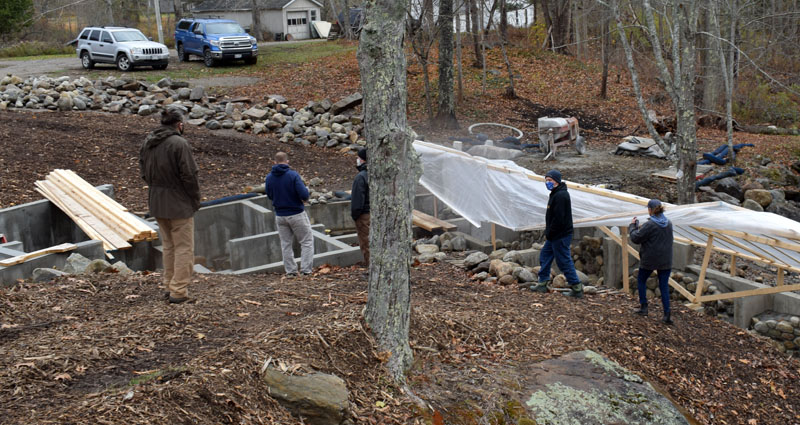 The town of Bristol hopes to create a park and viewing area in a second phase of the Bristol Mills fish ladder project. Construction of phase one should wrap in January, according to the contractor. (Evan Houk photo)

The town of Bristol is preparing for a second phase of the Bristol Mills fish ladder project — but first needs to raise another $400,000 to pay for it.

Members of the Bristol Fish Committee and Bristol Parks and Recreation Department, as well as other town officials and contractors, walked the construction site Sunday, Nov. 1 to discuss the second phase.

The second phase, now in the planning stage, will involve the creation of a footbridge and path to a park and viewing area for the fish ladder, according to Town Administrator Chris Hall. Other work will include educational signage and finishing the stonework on the fish ladder.

Hall said the fish ladder will be fully functional for alewives and other fish to migrate to their spawning grounds in the Pemaquid River watershed next April.

As part of the preliminary plan, a steel footbridge on top of the Bristol Mills Dam will lead from the parking area to a viewing area that will be partly surrounded by the fish ladder. 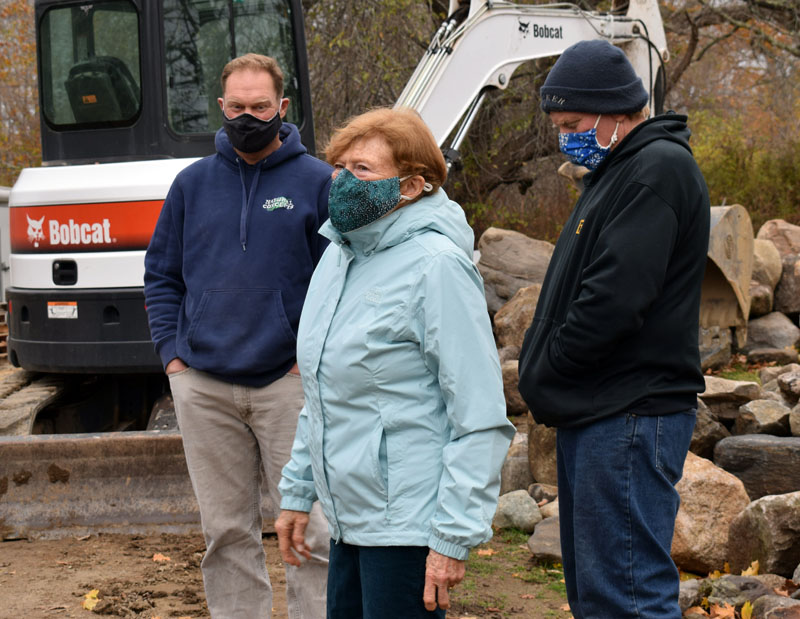 Mark Becker, of Becker Construction Inc., said that if the park is placed where the fish ladder makes its turn upstream, the fish migration in the ladder could be viewed from three sides.

Becker Construction, of Nobleboro, has a contract with the town of Bristol to build the new fish ladder for an amount not to exceed $550,000, the sum approved by voters at the conclusion of annual town meeting on Aug. 4. 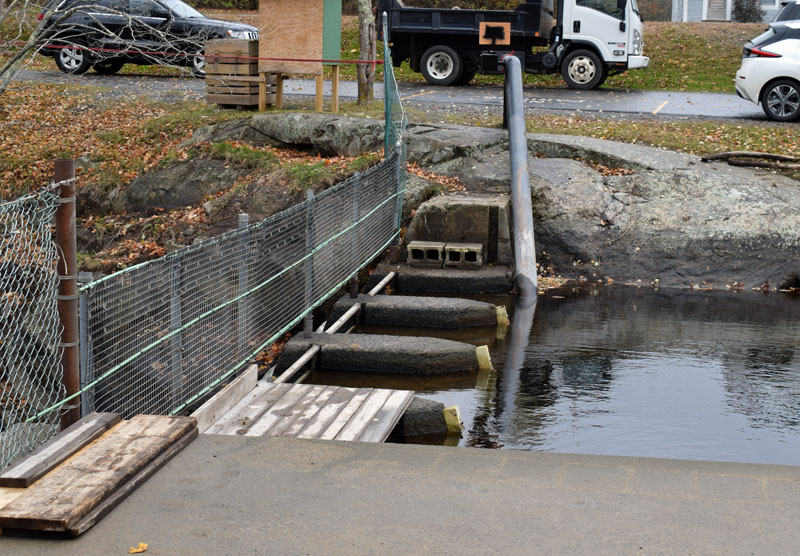 A second phase of the Bristol Mills fish ladder project would include construction of a steel footbridge across the dam to a viewing area at the fish ladder. (Evan Houk photo)

Hall said the cost estimate for phase two is $400,000. He said Peter Anderson, of the Bristol-based masonry subcontractor Natural Concepts Inc., has quoted a price of $275,000 to finish the stonework. Anderson was also present Sunday.

The steel footbridge and new steel gates and boards for controlling the water flow in the fish ladder are estimated to cost approximately $125,000. Hall said it may take a year or two tinkering with the water levels to find an optimal setting for the alewife run.

Hall said the town hopes to raise funds through donations, grants, and, likely, taxes. He said the town will ask voters to approve at least $25,000 for the second phase at annual town meeting next year.

For the first phase, about half of the $550,000 came from donations and half from taxes, Hall said by email. 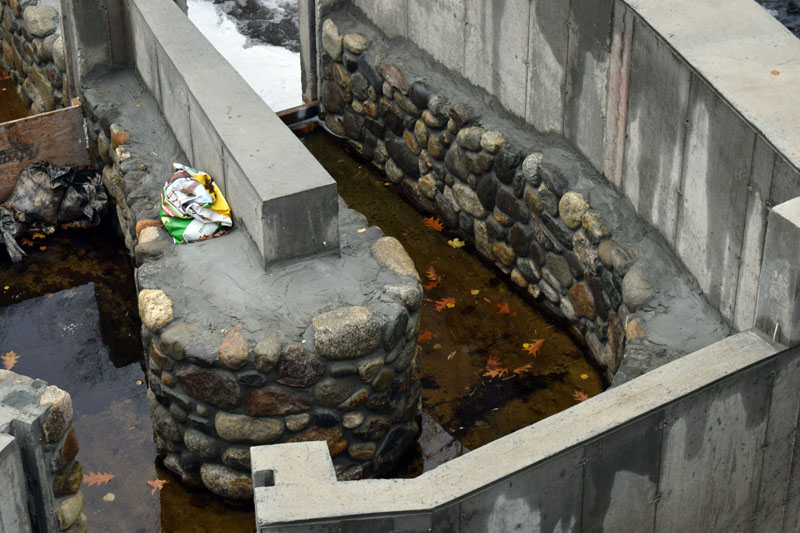 Natural Concepts Inc., of Bristol, is the masonry subcontractor for the natural stonework at the Bristol Mills fish ladder, part of phase one of the project. (Evan Houk photo)

Matthew Hanly, a Bremen resident serving as a pro bono fundraising consultant for the fish ladder, said by email that work on phase two will take place as funds become available.

“We are in a quiet phase of fundraising, actively identifying donors who have an interest in the fish ladder and adjacent park. Simultaneously, we are seeking public and private grants. We are always looking for donors who understand the important ecological benefit of the fish ladder and the benefit to the local lobster industry,” Hanly said.

Each of the 18 pools rises approximately 9 inches, shown to be ideal for alewives, Wilson said. 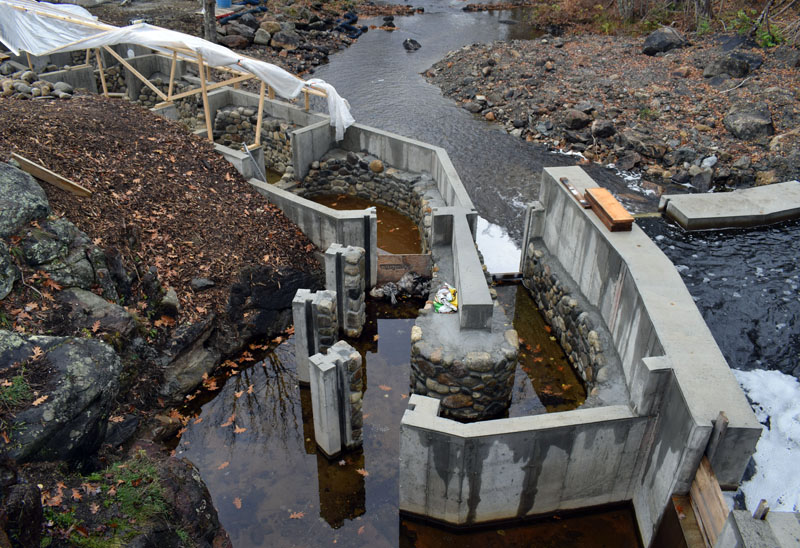 Bristol will have a functioning fish ladder for the alewife migration in April, according to Town Administrator Chris Hall. (Evan Houk photo)

Wilson talked about how the natural stone lining of each pool helps to dissipate the energy of the water as it flows into the pool.

“It’s a much more natural water flow for the fish,” Wilson said.

All concrete work on the ladder is finished and Anderson, of Natural Concepts, is working with Becker Construction to install the weirs between the pools and the stonework inside the pools.

Becker said the biggest challenge was not knowing exactly where ledge was until digging into the ground, which caused some modifications of the design and shifting of some pools.

Becker said he expects phase one construction, which will include the fully functioning fish ladder, to be finished sometime in January.