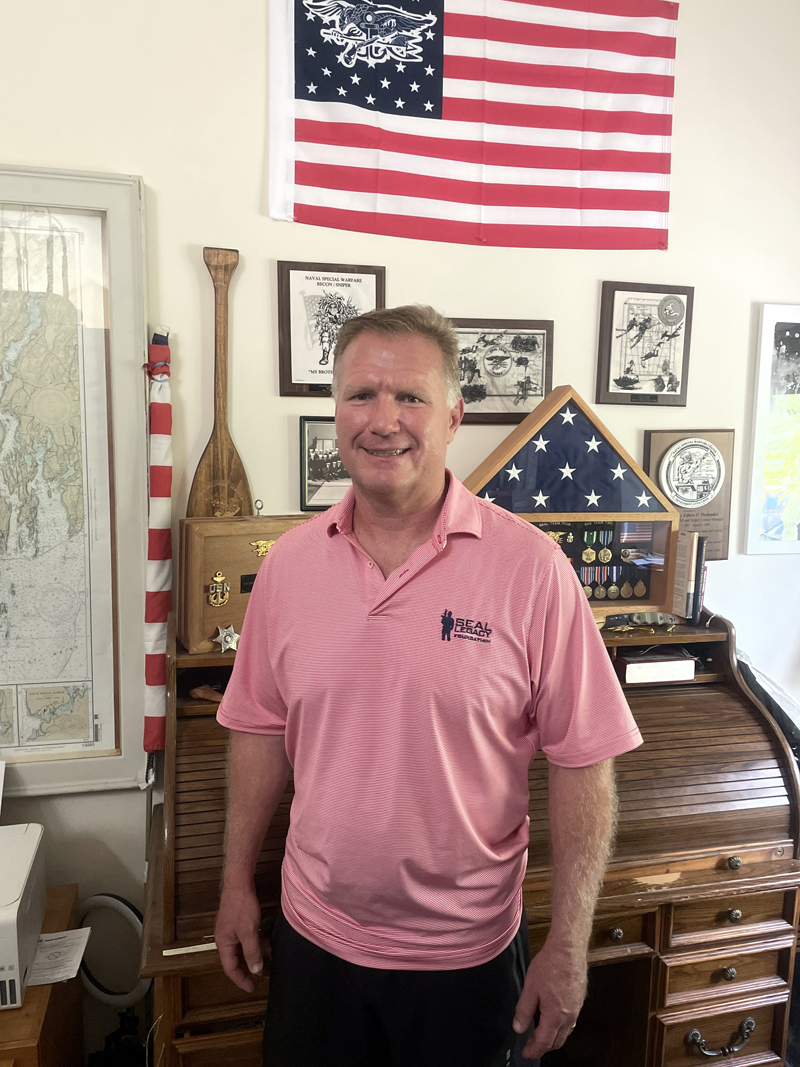 It’s not the first thing that happens, but keep Ed Thelander talking long enough and, at some point, a piece of military jargon slips into conversation. This is unsurprising in that Thelander is a career military man, but still notable because he doesn’t dispense military phrases like a man who needs to convince his listener of his bona fides.

In Thelander’s case, the phrase is “OODA loop” and he used it repeatedly during a lengthy interview with LCN regarding his candidacy for the Maine First Congressional District Seat currently held by Chellie Pingree, D-North Haven.

Shorthand for “Orientate, Observe, Decide, Act, repeat,” the acronym was specifically developed as conceptual approach to combat operations. As referenced by Thelander, OODA loop is a concept that can be applied to anything, specifically how government should work.

This campaign marks Thelander’s first bid for political office. A staunch conservative with a profound dislike of progressive policies, Thelander said he initially demurred when he was approached to run for office in 2021. His wife Liliana convinced him to run, he said.

“She was actually the big push to commit to this thing,” Thelander said. “They asked and I said that’s not what I do.”

“I am definitely not somebody who would normally run,” Thelander said. “My friends are like ‘Really Ed? That’s what you want to do?’ This campaign is definitely not about me. It is not about anything else. It is about getting things right and coming back to the center of America.”

A decorated combat veteran, Thelander spent 21 years as a Navy SEAL, serving in theaters all over the world. Thelander said he anticipated having some down time after he initially retired and moved his family to Maine in 2009, however before long the phone started ringing.

Although he is currently campaigning full time, Thelander has worked steadily as an international consultant and contracting in the fields of security operations and management, asset and executive protection. He is also doing some consulting work with the US Navy SEAL teams.

For Thelander, politics is a completely new arena. “I have never done anything like this,” he said. “I have never run for anything, shoot I’ve never donated to a candidate, now I am calling people all day long asking for a little bit of help there and there and everywhere, that’s wild all by itself.”

Thelander said he enjoys campaigning. He loves talking with people, finding common ground when possible and disagreeing when he can’t. “You know I’m going to these events,” he said. “It’s neat. I don’t agree with everybody, but I don’t pander at the same time. I tell people what they don’t want to hear if that’s what I really believe … You got to find that common ground whatever it is. There’s a place you stop and say this is where we agree and then you can start talking about what you don’t agree on.”

Thelander said he has no desire to go become a creature of Washington. He is a free market, private enterprise individual. If elected he is already planning on term limiting himself.

“I talk a lot with the term limit folks because I will definitely self limit,” Thelander said. “Six years is right. Three terms in Congress, that’s all it should be. Three terms, the first time you’re running, you’re dumping a bunch of your own money into it. I can attest to that. The second time, you’re getting some help from the party. The third time you’re getting all this crazy special interest money, which is what Chellie Pingree runs her campaign on.”

One thing Thelander is convinced of is socialism is not good for America and progressive politics in general is a plague on the Democratic Party. Thelander’s wife Liliana immigrated from Venezuela in the 1990s. The couple met through friends. She wanted to improve her English, he wanted to improve his Spanish. Today they have three children, ages 22, 20, and 15.

“Her family, her mom’s side is from Colombia,” Thelander said. “They fled the narco state for greener pastures in Venezuela and now many of them have fled back because it’s safer in a narco state than in a socialist state. It’s wild what’s happened there.”

On the campaign trail progressives have refused to even engage him in conversation, Thelander said.

“When you’re shaking hands and going door to door, and shaking hands at a parade or at a fair, if they have an American flag on their house or on their person, they are not a progressive, and that’s sad,” he said. “That is so sad, and I’m not talking about Democrats. I want Democrats to take charge of their party again.” 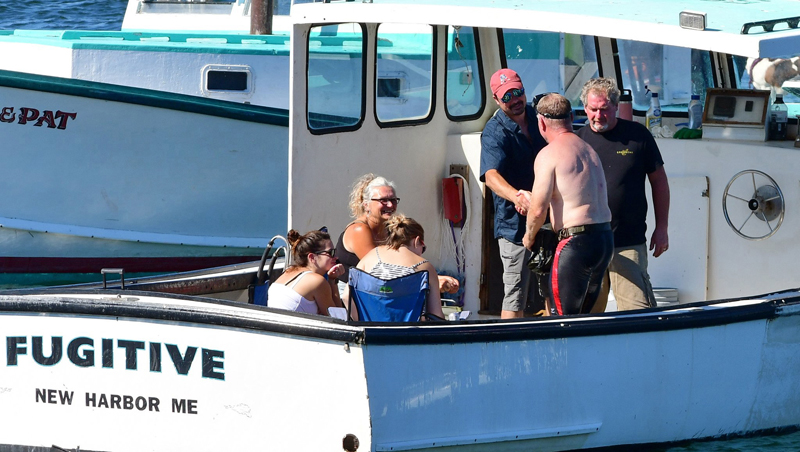 The problem with progressive politics is that such concepts are divisive by their very nature, Thelander said. Identity politics works to keep people apart, Thelander said; he sees some of the same mind control techniques he currently teaches to Navy SEALs being used on the American public.

“A big part of what we teach in school is how not to let them divide you, so we try to divide them,” Thelander said. “We divide by rank, race, gender, anything you can find, socio economic class, pick something. That’s what’s happening in America right now, we are trying to divide people and identify differences instead of finding commonalities, I actually taught against the indoctrination there. We have what’s called hate speech, and that’s what’s happening in America now.”

A staunch free market capitalist, Thelander said he supports tort reform as a way to bring down health care costs. If it’s possible to lower barriers to lowering costs, the market should correct itself, he said.

“I think a lot of the answer, one is tort reform, administrative tort reform and getting the insurance process down better because a lot of doctors are going without accepting insurance, because of the bureaucracy that’s been created there,” he said. “You have to hire multiple people to handle a patient, not to take care of the patient, but to take care of the billing and that’s crazy.”

“The things that are going on in government in healthcare, if you wouldn’t pay for it out of pockets; if you wouldn’t take out a loan to buy your neighbor curtains, why are we taking out a loan for our country to go buy frilly things for other countries?”

Thelander is all for clean energy source, he said, but it has to be developed according to the market. The government can’t just mandate standards for an infrastructure that does not yet exist.

“You got to look towards it, but you don’t commit to it,” Thelander said. “Henry Ford didn’t go shoot the horse when he invented the Model T and that’s what we’re doing in so many instances right now.”

In the real world

If Thelander is elected, he expects to bring considerable experience in security management and conflict resolution to bear on the task at hand. As an example of his experience, Thelander related a story involving contract work in Yemen. The larger story involved two parties literally shooting at each in the daytime and coming together for a good khat chew that night.

At the time, Thelander was tasked with security while working at an oil productions facility. In this capacity he had to thread the daily needle between the Yemeni Army which controlled outside the facility and the Yemeni tribes who provided security inside the perimeter. Neither of these two parties liked each other and neither group liked to operate sober.

The situation is complicated by the fact that khat use is ubiquitous among the locals. A flowering plant native to eastern and south Africa, khat is well known and widely used for its stimulative hallucinogenic effects. It is part of the culture in that part of the world. Forty percent of Yemen’s annual water supply is devoted to khat production.

“Taking care of the folks in the city is a little bit different,” he said. “The tribes will come in there. You’ll have a driver/guard. I mean the guy that drives, will go into the deputy general manager’s office of the company and air out his grievances. That’s pretty wild.

“You got water contracts which are a big deal, because they’re water and roads, and grading roads, and they’ll stop you from grading roads because you can’t leave your compound now. When that happens the sands uncover the pipeline and then they shoot the pipeline and sometimes it catches on fire. You can’t go fix your pipeline. It’s the wildest management attempted kumbayah thing you’d ever think of. You’re there for 28 days and then you rotate out. That’s that the pattern the oil guys established.”

“Keeping oil flowing is a wild business,” Thelander concluded. “That’s why we need more oil production here in America because you’re funding some stuff. We need the oil because we’re not pumping it here in America and we need to pump it here in America. It’s what needs to happen. We’ll transition to cleaner eventually, but right now this is what we got.”