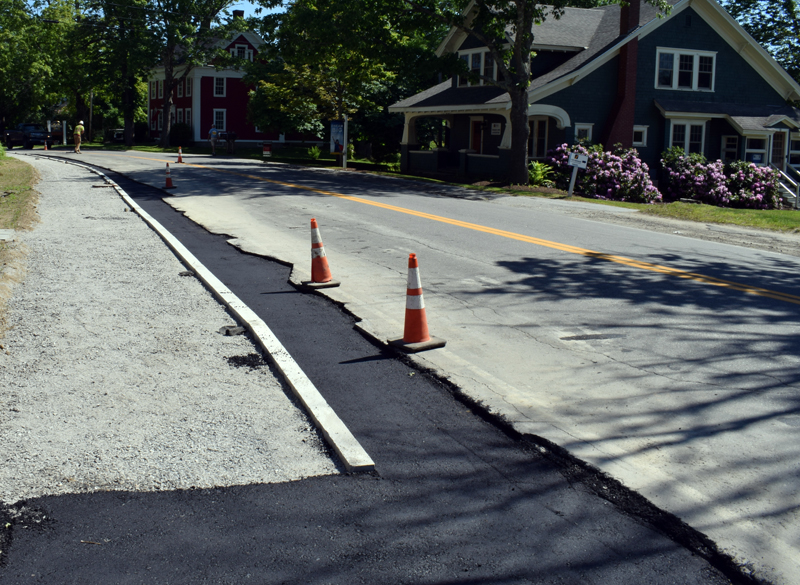 After delays, paving began on the Bristol Road sidewalk project in Damariscotta on Tuesday, June 16. The on-site inspector for the town estimates that the project will be complete by Friday, June 26. (Evan Houk photo)

After delays due to issues with materials, Damariscotta’s on-site inspector now expects the Bristol Road sidewalk project in Damariscotta to be complete by Friday, June 26.

The completion date in the contract was Saturday, June 13.

Seth Hagar, who co-owns Damariscotta-based Hagar Enterprises Inc., the contractor for the project, said he hopes to finish the majority of paving by the end of this week.

“The Bristol Road project is not going to be completed on time, we will be a few days late as a result of the process that was needed to resolve various issues that are common with a complex construction project,” Seth Hagar said by email Sunday, June 14.

Damariscotta Town Manager Matt Lutkus said the town will waive contractual penalties, pending the approval of the Maine Department of Transportation. The DOT is funding 80% of the project, with the exception of granite curbing that the town is paying for on its own, and has final say over many project decisions.

“I don’t want to hold any penalties over their head. I just want to get the project done,” Lutkus said Monday, June 15.

The project cost is about $1.2 million. The cost for granite curbing, which the town is paying for itself, is $51,582. The contract with Hagar Enterprises totals $911,416.50 with the granite curbing.

The sidewalk runs along the east side of Bristol Road from just south of Damariscotta Baptist Church to LincolnHealth’s Miles Campus. The project also includes drainage improvements.

The delay in the completion of the sidewalk has to do with the suitability of materials, including type-D aggregate subbase gravel that goes underneath the pavement on the sidewalk.

The material has failed multiple on-site tests performed by the DOT. Seth Hagar said Wednesday, June 17 that Hagar Enterprises has questioned the DOT’s testing method since three weeks after work started in March.

He said the results from 29 of 30 tests performed by S.W. Cole Engineering Inc., a private firm, did not match up with DOT results.

The aggregate subbase failed No. 200 sieve tests May 21 and June 2, causing the DOT to request its replacement. DOT standards allow the material to have 0-7% silt. The DOT’s June test found 7.7%.

At the June 3 meeting of the Damariscotta Board of Selectmen, Lutkus said a test by S.W. Cole Engineering, at the same time and from the same place as the DOT sample, showed different results.

The most recent DOT test of the gravel, taken June 9, showed a slightly lower concentration of 1/2-inch stones (34%) than the required 35-80%.

However, the same gravel had a higher concentration of 3/4-inch stones in the mix and it passed the No. 200 test, said Lutkus, leading to the town’s and DOT’s acceptance of the material with a 5% reduction in price for the gravel from Hagar Enterprises.

“Although the contractor’s material once again failed minimum testing criteria, the fact that the failure did not reoccur with the no. 200, i.e. fines, is important. That failure could have resulted in drainage issues and an unstable base,” Lutkus said in a June 10 email to DOT officials stating the town’s acceptance of the June 9 test results.

Type-B spec underdrain sand failed a No. 50 sieve in a test and retest on April 15 – coming in at 17% when the DOT requires 0-15%. Hagar Enterprises, the town, and the DOT agreed to a $1,200 credit for the underdrain sand that had already been installed.

Jennifer Paul, of the DOT, said in a May 8 email to the town that since the sand passed all the other sieve sizes and only narrowly failed the No. 50, it posed a low risk to the long-term functioning of the underdrain system.

“Digging up the road again to remove and replace underdrain backfill along this critical route may not be warranted, given the low risk,” Paul said in the email, referring to the site’s proximity to LincolnHealth’s Miles Campus.

“I can tell you that we have gone above and beyond in the manner in which we have constructed this project and managed it,” Seth Hagar said in an email Sunday, June 14. “We have given our very best to our home town just like we always have and will continue to do so in the future.

“We are sincerely apologetic for the delay and thank all of the traveling public for their patience as we worked with the MDOT and the Town of Damariscotta navigating an unforeseen set of circumstances.”