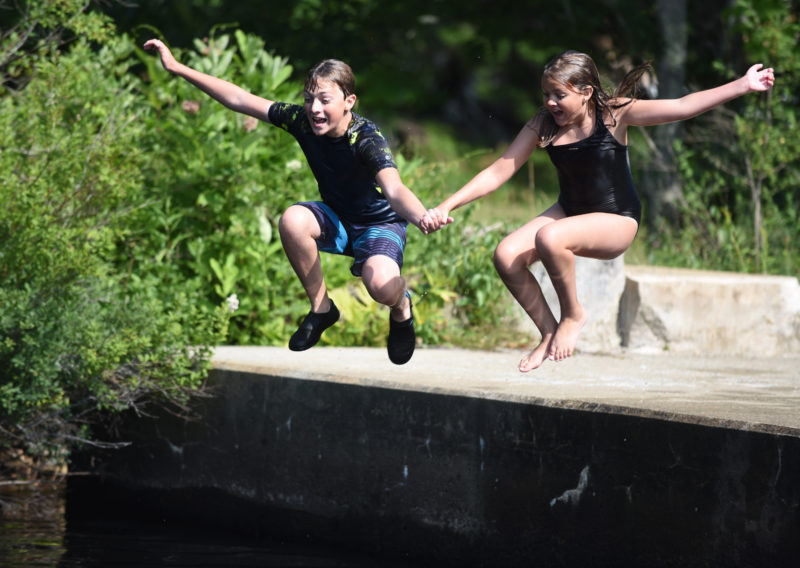 Logan Murff, 13, and Kellan Murff, 10, jump off the platform at the Bristol Mills Dam on Wednesday, July 11. (Jessica Picard photo)

Bristol residents will decide the fate of the Bristol Mills Dam in a referendum vote Tuesday, July 24.

The ballot will include three questions:

Question 1: “To see if the town will vote to authorize the municipal officers to repair the Bristol Mills Dam, and construct a new fish passage sufficient to accommodate the expected maximum capacity for alewife migration in the Pemaquid River watershed?”

Question 3: “To see what sum the Town shall authorize the selectmen to transfer from surplus, to be applied to the preparatory work to implement either Article 2 or Article 3 above?”

The selectmen and budget committee recommend the passage of Question 3, 3-0 and 10-0, respectively. The bodies did not make recommendations on the other articles.

If Bristol chooses the first option, to keep the dam and replace the fish ladder, multiple factors would affect the cost, Joe McLean, of the engineering firm Wright-Pierce, said during a public hearing June 20.

Wright-Pierce estimates that dam repairs and the addition of new gates and controls would cost $140,000.

The rest of the cost would depend on what type of fish ladder the town decides to build.

A double Denil-style fish ladder would cost $450,000-$600,000, depending on whether it is built at once or in stages, according to Wright-Pierce.

The second option for a new fish ladder is a pool-and-weir style.

Wright-Pierce’s estimate, for a larger pool-and-weir design, is about $850,000 plus a 20 percent contingency, according to Bristol Town Administrator Chris Hall. 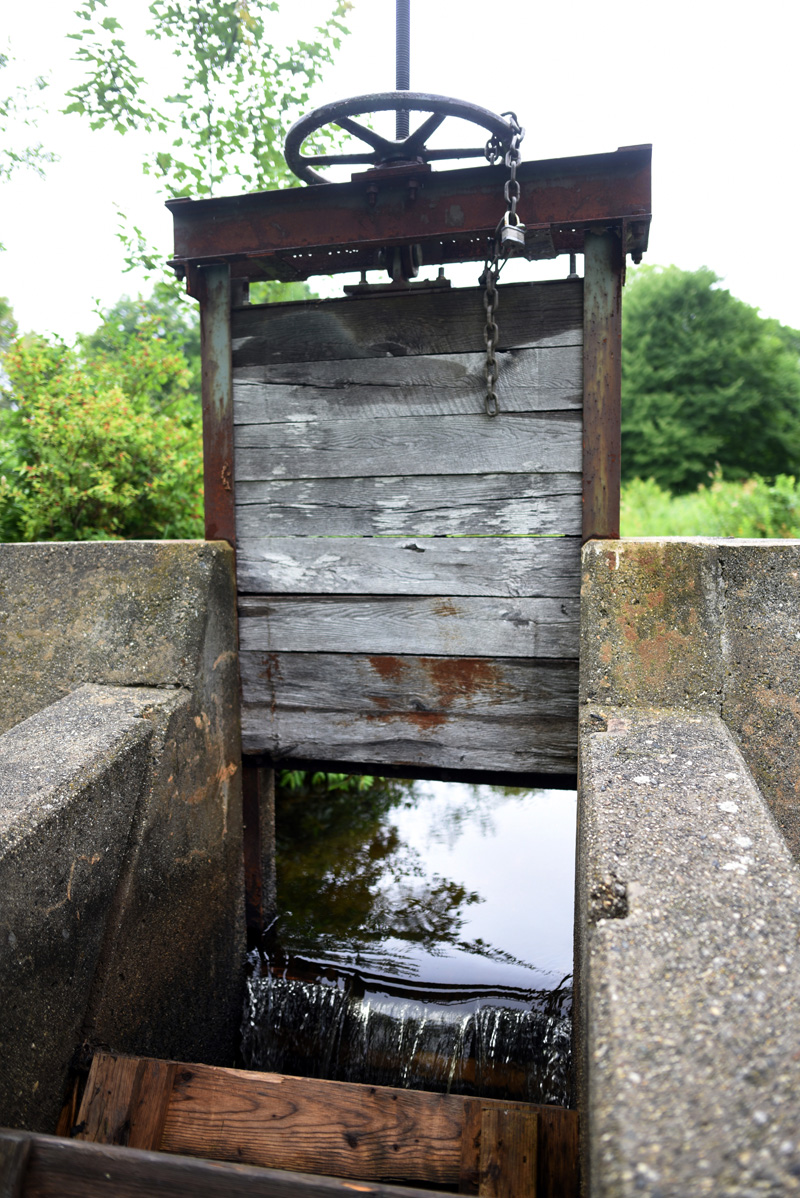 The top of the fish ladder at the Bristol Mills Dam, Tuesday, July 17. (Jessica Picard photo)

There is also the possibility of adding $20,000 for landscaping in the park.

If the town chooses the second option, which involves removing the dam and moving the swimming area and dry hydrant to Ellingwood Park, Wright-Pierce estimates the cost at around $610,000, with the possibility of additional costs.

According to Hall, none of the estimates are firm numbers, and more concrete estimates will be developed once the town chooses an option.

The town has also received a $200,000 conditional grant from a local family foundation for fish ladder renewal.

If voters select the second option, the town could use the $140,000 in town funds, but could not use the $200,000 grant, according to Hall. However, supporters of dam removal say the town could likely find other grant funding.

The parks department is officially neutral on the issue.

However, Bristol Parks and Recreation Commission Chair Clyde Pendleton said that, as a resident, he “really would hate to see (the dam) go.”

Pendleton said he does not believe it would be feasible to create a swimming hole at Ellingwood Park, and the necessary changes would be expensive.

“These trucks are 32 feet long, and you just don’t turn them on a dime,” Leeman said. “They also haven’t figured in the fact that it’s a hill you have to climb out of, and in the wintertime it just wouldn’t work.”

The fire department has been using the dam as a key water source since 1945, according to Leeman.

“This is as perfect as it gets,” he said. The dam provides an unlimited source of fresh water and a good location for training.

He called the dam a “manpower saver,” since it gives firefighters the option to run hose directly from the dry hydrant at the dam to much of the village.

Bristol resident Richard Francis said there are three factors to consider when voting: the ability to attract as many alewives as possible, the need to maintain a water supply for the fire department as well as a swimming area, and finding the most cost-effective way to do both.

Francis said removing the dam will cost less and attract more grant money, as well as give Ellingwood Park a renewed purpose.

“Voting yes on Question 2 is the only way to deliver all three: a million fish, guaranteed fire water and safe swimming, and a lower cost, which, if we are smart, may be almost nothing,” he said.

In a June 17 email to state Dam Safety Administrator Tara Ayotte explaining his findings, Fletcher said he supports MEMA’s 1999 classification of the Bristol Mills Dam as having “low potential hazard,” since the dam’s failure is unlikely to cause downstream property damage.

However, he also wrote that having a swimming area at the dam could pose a safety risk.

“It would be wise for a dam owner to examine the risk to public safety at this dam, during both fair weather and storm conditions, and keep the dam and its head-pond out of bounds to the public,” Fletcher wrote.

The selectmen discussed Fletcher’s findings June 27 and decided that existing signs warning visitors to “swim at (their) own risk,” as well as closures during extreme high water conditions, are enough. 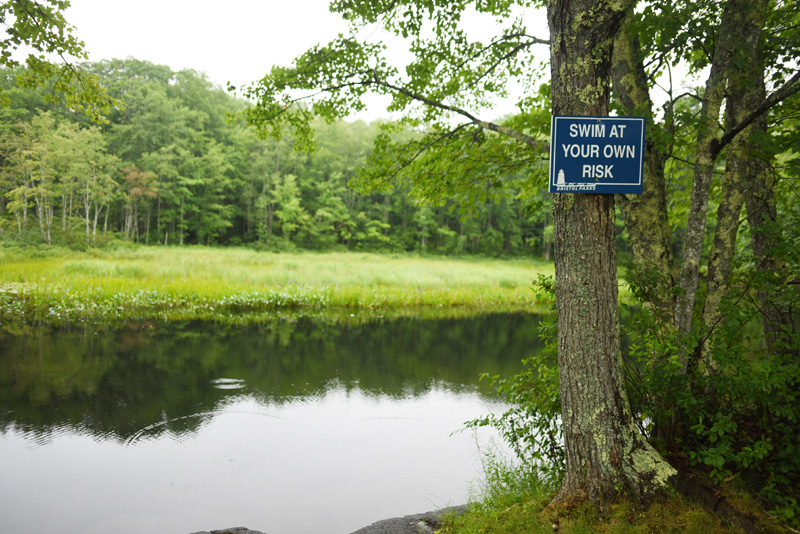 The water at Ellingwood Park, where the town would move the swimming hole if voters choose to remove the Bristol Mills Dam. (Jessica Picard photo)

Sean Hunter, of the Bristol Highway Department, completed repairs to the fence across the top of the dam that week, according to Hall. Hall suggested referring the matter to Leeman, who is the town’s director of emergency preparedness and safety officer as well as its fire chief.

Alison Lee, who grew up in Bristol and still owns property in town, said the swimming hole at the dam is “a community gathering spot.”

Lee said she knows people who have never voted before, but will vote to save the dam.

“I have not seen this kind of movement in a long time in Bristol,” Lee said.

“It’s brought so many different people together,” Wendy Arzate, who grew up in Bristol and still lives there, said of the movement to keep the dam.

“It is the last freshwater swimming spot in the town of Bristol that’s open to the public,” Lee said.

Lee does not believe the public will want to swim at the Ellingwood Park site.

“We are a community. We have to make it work for all sides,” Lee said.

Lindsey Murff, an international teacher originally from Texas who was recently visiting Bristol, said the swimming hole is “a great little oasis.”

Murff’s 14-year-old son, Evan, who was swimming with his siblings, said the swimming hole was fun, and he prefers it to swimming in salt water at the beach.

“We come here almost every day in the summer,” said Jade Farrin, who lives down the street from the dam and was watching her brothers swim. “We are very supportive of (saving) the dam.”

McLetchie said the committee as a whole is remaining impartial. “We are just trying to lay out the facts,” he said. 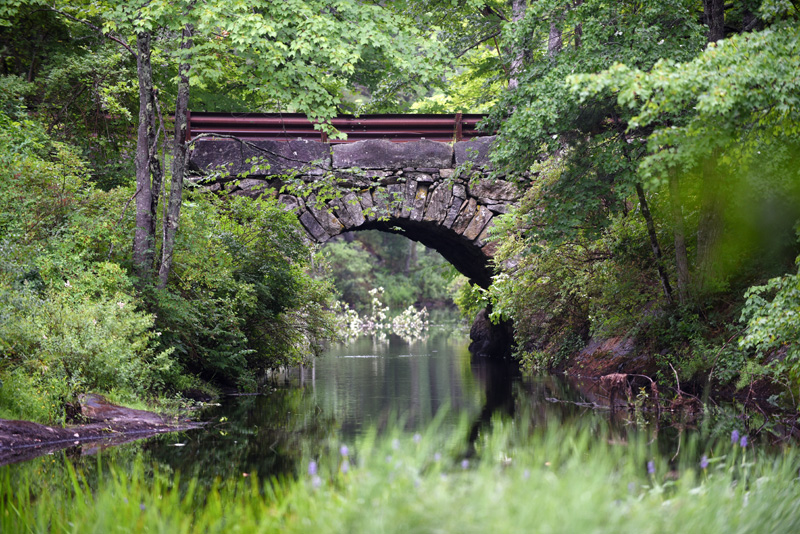 The Arch Bridge, upstream of the Bristol Mills Dam, in the area where the town would place weirs to maintain upstream water levels if voters choose to remove the dam. (Jessica Picard photo)

McLetchie said that if the dam is replaced by weirs – the control mechanisms mentioned in Question 2 – the fishway would become more natural and require less maintenance.

The fish committee has worked around 63 hours in May and June, and will probably have worked around 75 hours by the end of the year, according to McLetchie. He said the hours of work would be reduced to around 16 per year if the dam is replaced. The work would be to canoe and walk the river in the spring and fall to clear obstructions.

McLetchie said that with so much human intervention needed for a fish ladder, “there’s a lot of room for error.” With the weirs creating a more natural fishway, “it would run itself like a natural river,” he said.

McLetchie said that a more natural fishway would make it easy for alewives to pass through, as well as other fish species.

“It’s unquestionably better for the fish population and the ecosystem of the entire river,” he said.

According to the 2017 Bristol Mills Alewife Count Summary, around 39,332 alewives passed through the fish ladder last year.

In its conclusion, the summary states that “the annual alewife count has demonstrated since 2013 that the portion of the Pemaquid River alewife population seeking spawning habitat upstream of Bristol Mills is much lower than its productivity potential of roughly 600,000 to 1,000,000 adult fish.”

“A review of Bristol’s history with alewives and dams and that of other Maine towns over the past 200 years clearly demonstrates that effective management of fish ways has always been difficult to execute with consistency,” the summary continues.

“Consequently, any proposed fish passage solutions for the Bristol Mills dam should allow the most ‘hands-off’ approach that requires the least amount of ‘tinkering,’ adjustments, and maintenance as possible,” the summary states.

Phil Averill, who was on the Bristol Mills Dam Advisory Committee, supports Question 2, or replacing the dam with stone weirs upstream.

“It’s less expensive and requires less maintenance in the future,” he said. He also said it opens up the possibility of the town receiving grant funding.

Claire Enterline, who was the chair of the dam advisory committee, said she could not have a public stance on the issue, but “the dam committee worked very hard to make sure both options would maintain or enhance what values the current site has.”

The polls will be open at the town office from 8 a.m. to 8 p.m., Tuesday, July 24. Absentee ballots will be available until Thursday, July 19.