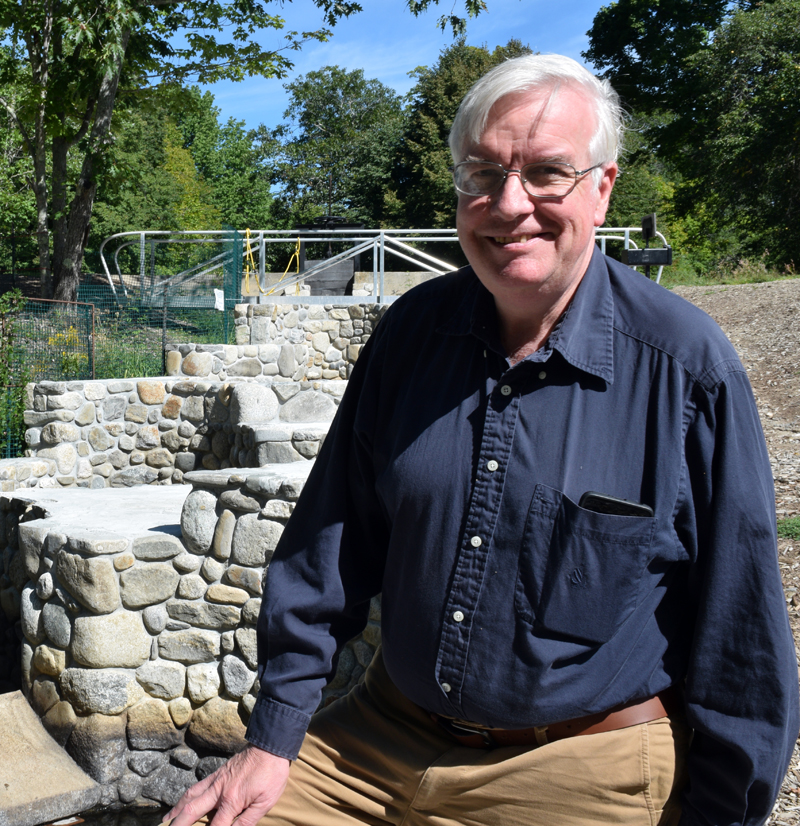 Bristol Town Administrator Chris Hall stands in front of the Bristol Mills Fish Ladder, one of the major projects completed during his six-year tenure, on Saturday, Sept. 3. Hall will be retiring from the sixth different career he has had during his life, town administrator, at the end of the year. (Evan Houk photo)

Bristol Town Administrator Chris Hall will retire from the sixth different career he has had in his life when he leaves his current post at the end of 2022.

Hall has worked in academia, the business world, and in public service over the years.

“I changed careers half a dozen times,” Hall said during an interview Saturday, Sept. 3. “Public service is what I really enjoy.”

During his time as Bristol’s town administrator, Hall has seen the transition to a full-time fire chief and to a full-time director for the Parks and Recreation department. He has found satisfaction in being able to resolve disputes and help people in need.

“The part of the job of town administrator that, in some ways, gives the most satisfaction is being able to quietly, anonymously, help individuals,” Hall said.

He has also overseen many projects that he says may not have been possible without the generous donations of Bristol residents. Some of these projects are the construction of the new Pemaquid Beach pavilion, the Bristol Mills Fish Ladder, and the creation of a softball field at Bristol Consolidated School.

“We’ve been able to complete a few projects that I don’t think we could have done, or I don’t think the town would have wanted to do, without support from donors and/or grants,” Hall said.

Hall credits his partner, Abby Ingraham, with helping to facilitate some of the fundraising using her natural skills.

Hall said he has been fortunate to have a good staff in the Bristol town office and a solid select board during his six years.

Hall was born and raised in Coventry, England, “right in the middle” of the country, he said.

He came to Maine as an exchange student when he was a teenager to study at the University of Maine at Augusta and visit distant cousins. He said he has always felt at home in Maine since first visiting and he now lives in a home in Bristol Mills where he has been since 1991.

“I had an aunt and uncle in England who named their cottage, Wiscasset, because they’d heard such great stories from the cousins about Wiscasset,” Hall said.

“As a little kid, Wiscasset was the first place in the U.S. I had ever heard of and I figured it must be like New York, Hollywood, and Miami Beach all rolled into one,” he said.

Hall attended the University of Oxford in England, earning his doctorate in the history of arms control. He taught 20th century history at the university for a time before moving to the U.S. to try his hand at a career in business. He worked in the mining and steel industries from 1980-1995 and spent much of his time commuting by plane from Maine to New York City.

His time in this field spawned the book, “Steel Phoenix,” which he wrote about the rebirth of the steel industry as a recycling business.

Hall then spent 10 years as a development consultant working with state agencies, municipalities, ports, and airports; advising on transportation, logistics, and economics.

As he started to deal more and more with public policy, he said he got the political itch.

Hall served as chair of the Maine Democratic Party from 1996-1998, before deciding to run for the Maine House of Representatives, where he served from 2000-2002.

“When you work on public policy, you want to get involved in making that policy,” he said.

Because of the closeness of the vote, and its importance to political control of the senate, Hall was featured in The New York Times after the race.

“When I won the senate seat, on the night, it was only by two votes,” Hall said. “They called me ‘Landslide Chris Hall.’ Then after the recount, the final tally was seven votes. So then they called me ‘Mandate.’”

During his time on the utilities committee in the legislature, Hall drafted the bill that created Efficiency Maine, which is a quasi-state agency that facilitates the use of clean energy using tax credits and other methods.

“(Efficiency Maine) has been a phenomenal success, exceeding my expectations,” Hall said. “I don’t deserve a lot of credit for writing the bill. I simply stole the bill that created Efficiency Vermont and changed one word throughout.”

He also created Maine’s first and only marine protected area, which is Great Salt Bay in Newcastle.

In 2004, Hall lost his senate seat to Dana Dow, leading to his fifth career when he shifted back to academia.

Hall became the first president of The American University in Kosovo in 2006, where he remained for 10 years before returning to Maine.

He was considering the position as president at The American University in Afghanistan, but decided, at the urging of Ingraham, to stay close to home.

Before he leaves as town administrator, he still has a few things he would like to see wrapped up in Bristol.

He would like to see the completion of a permanent walkway across the Bristol Mills Fish Ladder and a set of steps installed for people to get out of the swimming hole onto the concrete pad near the top of the dam.

Hall said he is looking forward to traveling to warmer spots during the Maine winter now that he is retired.

“I think at this point, I want more time to do reading, writing, and traveling,” he said.