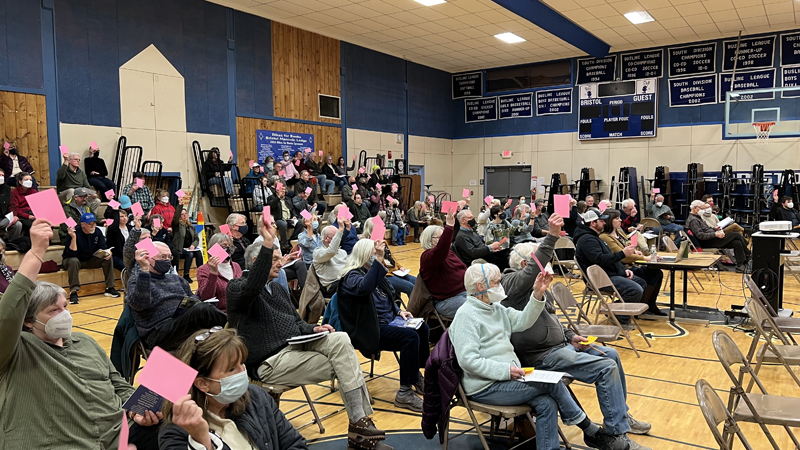 Bristol residents vote to approve one of 48 warrant articles during the annual town meeting in the Bristol Consolidated School gym on March 22. (Jason Pafundi photo)

Residents overwhelmingly voted to allow the comprehensive plan committee to continue working on shaping the future of Bristol, during the annual town meeting on March 22.

Voters also approved the appropriation of $60,000 in surplus funds for professional assistance to complete the committee’s task. The committee will look to hire a consultant and will issue a report to the town in 2023.

The other 46 warrant articles passed with little to no opposition. More than 100 people attended the meeting, and moderator Don Means kept the meeting moving at a brisk pace – it took a little more than an hour to complete.

With voter approval, the committee will continue to help the town prioritize projects and help town leaders make decisions about natural resources, climate resiliency, housing, land use and investments.

The committee launched an outreach campaign – with less in-person contact because of the pandemic – that included fliers and posters around town and a five-question survey asking residents what they like about Bristol, what concerns they have, what they envision for the town’s future and whether they want a comprehensive plan.

Voters approved spending $3,381,644.36 to run the municipal government. That number represented an increase of nearly $200,000, or around 6%. The increase will be offset by a record surplus amount of more than $1.5 million. The tax rate for 2022 won’t be determined until the school budget is finalized. Last year, Bristol residents paid $7.20 per every $1,000 of assessed property value.

There were 469 ballots cast for five elected positions during voting held on March 21.

Kristine Poland retained her seat on the select board. She received 240 votes; Paul Leeman, Jr., received 219. Jessica DiMauro and June Donenfeld were elected to the school committee and Clyde Pendleton, Sr., was re-elected to the parks and recreation commission.

Additionally, Andrew Poland and Andrea Perley retained their seats on the planning board.