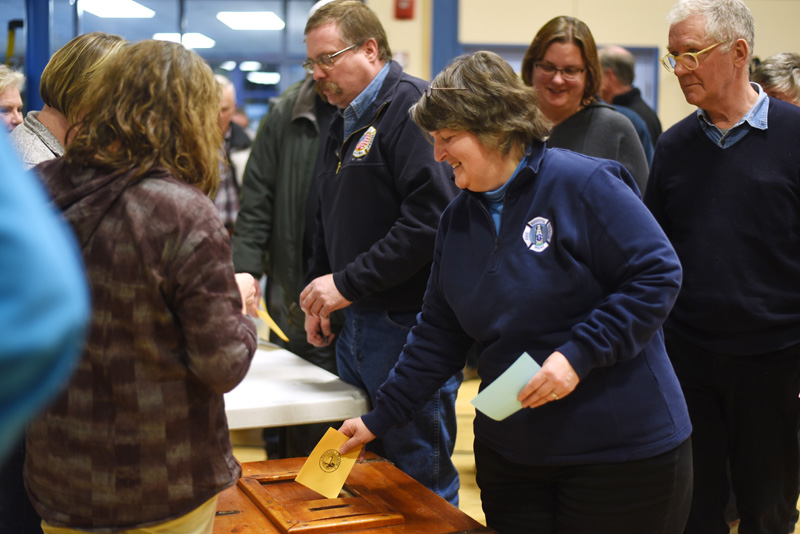 Bristol residents approved a decision to hire a full-time fire chief during an open town meeting lasting almost four hours on the evening of Tuesday, March 20.

Bristol will now be the second town in Lincoln County to have a full-time fire chief, with Newcastle having hired a full-time chief in 2009.

The details of the position were discussed for about 40 minutes, with Bristol Fire Chief Paul Leeman Jr. speaking first.

Leeman requested that the vote be taken by secret ballot, because he had heard that some residents were concerned a “no” vote from them would compromise the fire department’s willingness to help them in an emergency.

Leeman was adamant that this was not the case.

“This is our town. You are our people. Your homes are our homes,” Leeman said to applause from the crowd.

Richard Francis, a member of the town’s budget committee, spoke as an individual to commend the fire department, but stated that he felt there needed to be more discussion before a vote could be taken.

“Right now, I can’t judge if we need a full-time chief … We need to know much more … I don’t think the town has enough information to vote on this article,” Francis said.

The results of the secret ballot were 88 in favor, and 71 opposing.

The one article that was not passed during the meeting was one authorizing the selectmen to study the costs and benefits of annexing of Louds, Marsh, and Bar islands.

A couple of Louds Island residents were in attendance and made it clear that most people on the island were not interested in becoming part of Bristol.

“We are islanders, and value our independence,” one said in a statement to the audience.

The warrant article introducing an amendment to the town’s shoreland zoning and land use ordinances that would place a ban on digital signs was passed after a 20-minute discussion.

The amendment will bar the use of digital signs from 10 p.m. to 4 a.m., prohibit the message on a digital sign from changing more than once every 10 minutes, and prohibit flashing or scrolling messages.

The amendment will allow digital signs already in existence in town to remain for five years or “until such time as they are replaced for any reason.”

Selectman Paul Yates opened the discussion by voicing his support for the amendment, imploring voters to “preserve Bristol’s character, not lose it by the flash of a welcome and goodbye.”

Leeman spoke of possibly allowing the digital sign at Ellingwood Park to remain past the 5-year rule of the amendment. 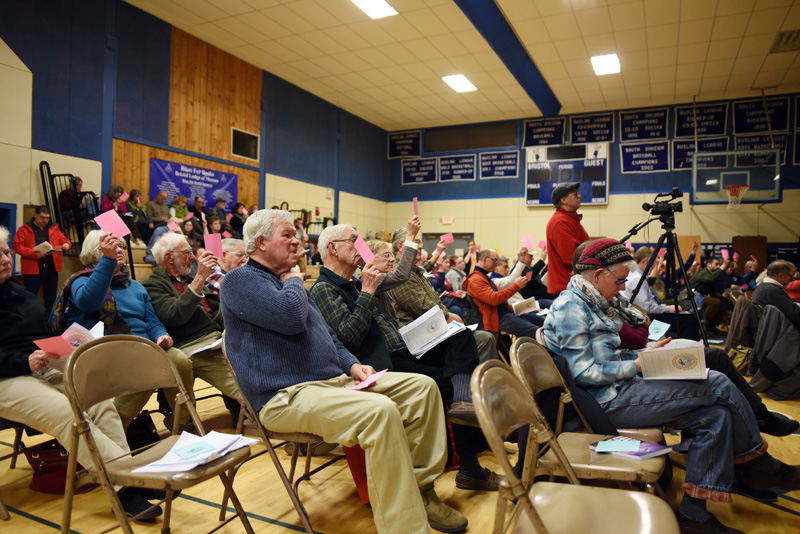 “I feel that this one sign should be grandfathered, since it serves an important purpose,” Leeman said. The sign is used by the fire department to relay safety information to the public.

“I’m going to vote against the sign. I think it’s very distracting,” Karen Farnsworth, who lives across the street from the parks department, said.

School Committee Chairman David Kolodin commented how the school system may benefit in the future by using a digital sign, since it would save school members the trouble of going out in the snow to change its message.

“It would be a wonderful thing if we could operate a sign from inside the school,” he said.

A motion was made to move the question, thus ending discussion and moving on to voting.

A $10,000 line in the municipal budget for a new solar-array capital account was also approved. The selectmen had voted unanimously in September of last year to negotiate a contract with Searsport-based Sundog Solar for the installation of a solar energy array at the Bristol-South Bristol Transfer Station.

The $389,350 Bristol Parks and Recreation Commission budget was approved after a lengthy discussion.

It was the only specific budget that had not been approved by the budget committee. It had failed to meet approval from the committee after a 6-4-1 vote.

A point of contention was the commission’s decision not to fund the annual Olde Bristol Days fireworks. As a result, the selectmen had built the cost of the fireworks into the municipal budget.

Chuck Hanson, the vice chair of the budget committee, spoke on behalf of the committee to explain the disapproval.

“I want to emphasize that the budget committee is charged with making a recommendation,” Hanson said. The committee cannot change a budget; it can only vote to recommend it or not.

Hanson explained that several members of the committee did not have a clear understanding of what had been presented by the parks department. Others felt that the department had failed to honor a commitment it made last year to plan and execute Olde Bristol Days.

According to Hanson, the committee felt that the budget “represents a distancing of (the Bristol Parks and Recreation Commission) from Olde Bristol Days.” 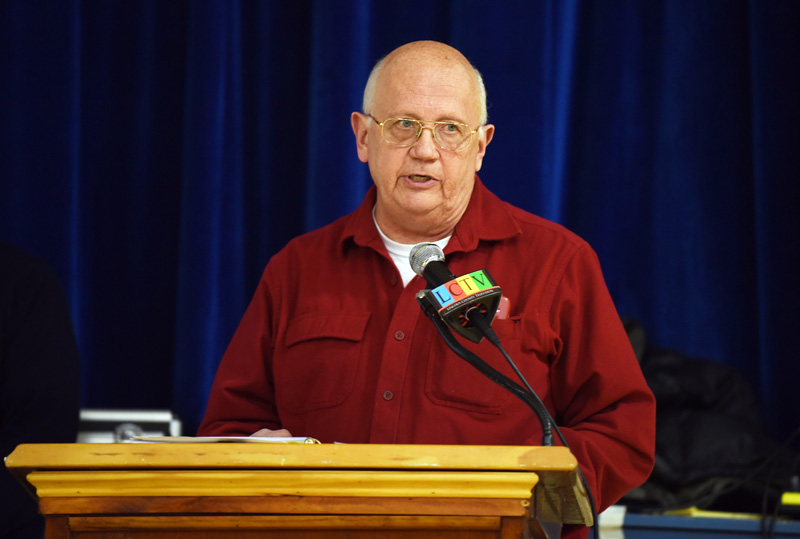 Bristol Parks and Recreation Commission Chair Clyde Pendleton said that the fireworks were left out of the parks budget due to the steep $7,000 expense for 20 minutes of excitement.

“We felt (it) could be spent toward maintenance … spent toward other things that need to be done,” Pendleton said.

“I don’t understand why we are spending so much time debating something that doesn’t cost (us) any money,” a resident said after about 45 minutes of presentation and discussion about the parks budget. The question was then moved and approved after a vote.

The Olde Bristol Days budget of $6,000 was also approved.

A $30,000 line in the budget for reserve accounts for the Bristol Mills Dam and fish ladder was also approved.

Board of Selectmen Chair Chad Hanna also made the announcement that a $200,000 anonymous gift had been given to the town, contingent upon the dam being kept and the fish ladder being updated.

“We have to figure out what the final plan is with the dam,” Hanna said.

Most of the increase stems from the $835,546.97 special education budget, an increase of $182,358.77, or 27.92 percent. Most of the increase is attributed to $214,000 in private tuition costs for high school special-education students, an increase of $126,336, or 144.11 percent, from the previous year. There are four additional high school special-education students this year, including one who is attending school outside the district.

Due to an increase in state subsidy, Bristol taxpayers will not feel the full impact of the education budget increase. The budget calls for $4,116,521.31 to be raised through taxes, an increase of $46,289.99, or 1.14 percent, from the previous year.

“Please come back. We still have more articles,” Don Means, Old Bristol Historical Society vice president and designated moderator, begged as people got up to cast their ballots. By this point in the evening, more than half of the voters had already left the meeting.

Selectman Paul Yates, Bristol Planning Board member Jeff Eilenberg, Bristol School Committee members David Kolodin and Cerina Leeman, and Parks and Recreation Commissioner Sandra Lane were also all re-elected to their prospective positions for three-year terms. Kolodin chairs the school committee and represents the town on the AOS 93 School Board.

(Correction: An earlier version of this article online and in the March 22 print edition incorrectly reported the total municipal budget due to the exclusion of a $1,500 donation to LifeFlight. The Lincoln County News regrets the error.)