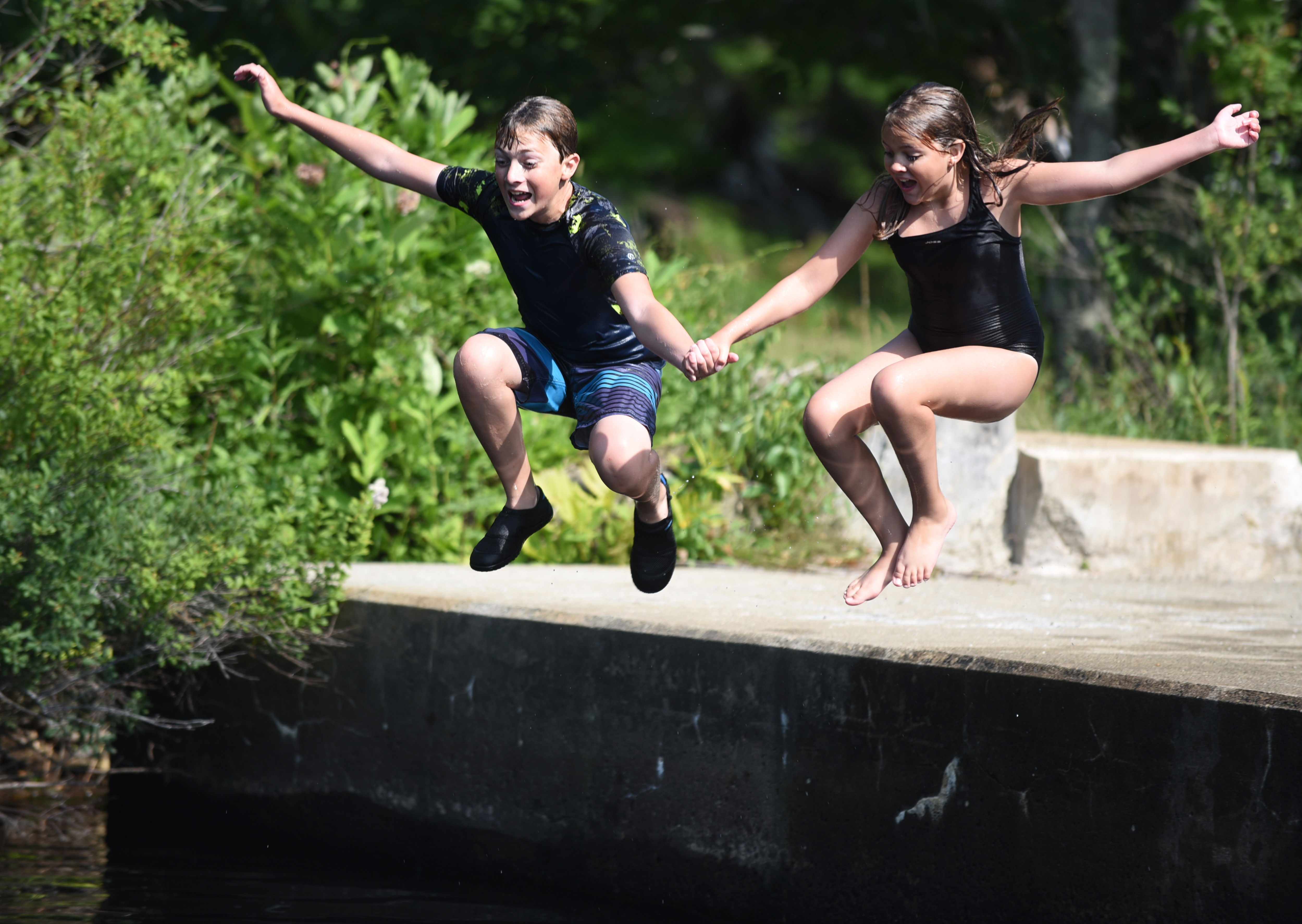 Logan Murff, 13, and Kellan Murff, 10, jump off the platform at the Bristol Mills Dam on Wednesday, July 11. (Jessica Picard photo)

In a long-awaited referendum vote, Bristol residents voted overwhelmingly to save the Bristol Mills Dam on Tuesday, July 24.

Bristol voted 992-105 in favor of Question 1, to repair the dam and replace the fish ladder; 948-115 against Question 2, to remove the dam, build stone weirs upstream, and provide dry hydrants and swimming at Ellingwood Park; and 1,068-30 in favor of Question 3, to transfer $40,000 from surplus for preparatory work on either option.

“I’m very proud of the community for getting so involved in the whole process and taking such an interest in it,” Bristol Board of Selectmen Chair Chad Hanna said. “All along, the selectmen have tried to take a neutral stance on the whole thing, but my personal feeling is that I’ve always been supportive of keeping the dam.”

“I felt that what was being proposed could have worked, but it introduced too much uncertainty,” Hanna said of Question 2.

Bristol has just under 2,300 registered voters, and 1,108 cast ballots, according to Town Clerk Rachel Bizarro.

Leeman said the process has brought “the community together like nothing I’ve ever seen” and “many good things” have come out of it.

The three questions read as follows:

Question 1: “To see if the town will vote to authorize the municipal officers to repair the Bristol Mills Dam, and construct a new fish passage sufficient to accommodate the expected maximum capacity for alewife migration in the Pemaquid River watershed?”

Question 3: “To see if the Town shall authorize the municipal officers to transfer $40,000 from surplus to be applied to the preparatory work to implement either Question 1 or Question 2 above?”

With voters approving the first and third questions, the town will work toward the repair of the dam and the construction of a new fish ladder.

The engineering firm Wright-Pierce estimates that dam repairs and the addition of new gates and controls will cost $140,000. The rest of the cost depends on what type of fish ladder the town decides to build.

A double Denil-style fish ladder would cost $450,000-$600,000, depending on whether it is built at once or in stages, according to Wright-Pierce.

Wright-Pierce’s estimate, for a larger pool-and-weir design, is about $850,000 plus a 20 percent contingency, according to Bristol Town Administrator Chris Hall.

Hall has said more concrete estimates could be determined when the town chose an option.

“I’m glad the selectmen now have a mandate,” Hall said.