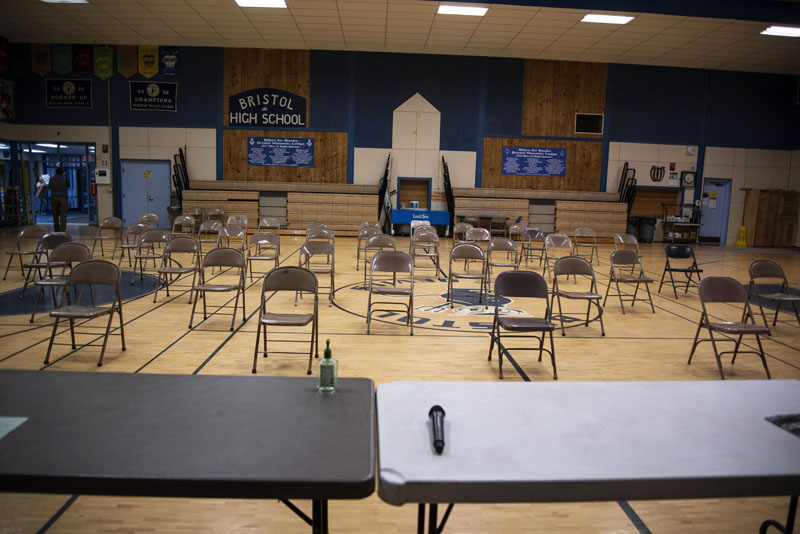 Due to coronavirus concerns, Bristol held an abbreviated annual town meeting that lasted about 13 minutes in the Bristol Consolidated School gymnasium at 7 p.m., Tuesday, March 17.

About 15 residents showed up and sat in folding chairs spaced 6 feet apart throughout the gym.

In a notice on the town website, Bristol asked elderly and vulnerable residents not to attend the meeting, as voters would only be approving essential articles to keep town government running.

All the articles voted on were recommended unanimously by the Bristol Board of Selectmen and the Bristol Budget Committee.

Examples of these articles were appropriations for Bristol Byways, the town’s solar array, repairs to the Bristol Mills Dam and the replacement of the fish ladder, the bicentennial commemoration and Olde Bristol Days, and a $50,000 line of credit for the new Pemaquid Beach pavilion.

At the beginning of the meeting, residents voted to dispense with reading of the articles to save time.

Residents approved the majority of the town municipal budget and the school budget.

The town operates on a calendar year while the school system operates on a July-June fiscal year, which split the tax impact of the increase across two years.

Hall expects the tax rate to rise from $6.75 per $1,000 of valuation to possibly $7.25, he said in a March 10 email. He said the increase may be less if the town has a significant increase in valuation from new construction and improvements as of April 1.

They were sworn in after residents voted to recess the annual town meeting until 7 p.m., Tuesday, June 16.