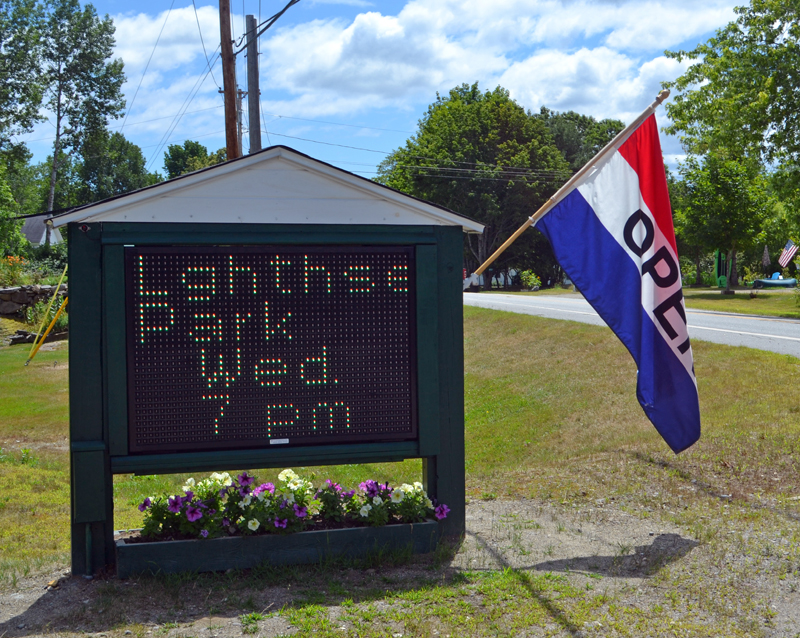 A new electronic sign at Ellingwood Park in Bristol has sparked discussion about whether electronic signs fit the character of the town. (Maia Zewert photo)

The preservation of Bristol’s unique character was the focus of concerns expressed by residents during a public hearing about an ordinance to temporarily ban recreational marijuana-related businesses and about the use of electronic signs in the town.

The Bristol Board of Selectmen held the public hearing Wednesday, July 19, to review items on the warrant for a special town meeting in August. The two other items on the warrant – amendments to the town’s shellfish conservation ordinance and a funds transfer – drew little comment from those in attendance.

Bristol officials, like their counterparts across the state, have spent the past several months discussing how the town will address the regulation of recreational marijuana shops, social clubs, and commercial cultivation.

Maine voters legalized recreational marijuana, subject to regulation and taxation, for ages 21 and up, during a statewide referendum in November 2016. Bristol voters opposed the measure 995-868, according to unofficial results.

After a series of meetings, the Bristol Planning Board voted June 1 to recommend an ordinance temporarily banning all recreational marijuana-related businesses until after the state completes its rule-making process. Under legislation passed in January, lawmakers have until Feb. 1, 2018 to make rules governing such businesses.

The planning board, and later the selectmen, decided to move forward with an ordinance that temporarily bans marijuana rather than a moratorium.

In separate meetings with the selectmen and the planning board, Bristol Code Enforcement Officer Joe Rose said Bristol would be legally required to work on an ordinance during the 180-day moratorium. Rose also said he had spoken with officials from other towns that have enacted moratoriums and they expressed regret about the decision due to the requirements.

During the public hearing, however, residents referred to the ordinance as both a ban and a moratorium.

“It’s already here. Let it go,” Davidson said. “I don’t want to see lighted signs saying ‘buy your weed here,’ but if someone wants to go … buy some weed, what the h— do we care?”

Chad Hanna, the chair of the board of selectmen, said the purpose of the temporary ban would be to allow Bristol some time after the state sets its rules to determine how it wishes to regulate the new category of businesses. If the state were to pass regulations on marijuana that mirror the regulations on alcohol, Hanna said it is likely the town would not add more restrictions.

“It’s really just a way for us to see what’s going on,” Hanna said. “It’s not intended to be a forever ban. It does have a sunset (date), but it gives the town the opportunity to have the conversation about having retail establishments.”

Sandra Brackett expressed support for the ban and said she doesn’t think it is in the town’s best interests to allow recreational marijuana establishments. She said marijuana is still illegal at the federal level.

Susan Foster said that rather than move toward an outright ban on such businesses, the town should consider how it wishes to guide development.

“Part of the charm of Bristol is the antiquity of the town,” Brackett said. “Do we want to preserve what we’ve got, or do we want those things to go away?”

Brackett’s concerns about the town’s character resurfaced later in the evening, during discussion of a non-binding referendum question about the use of illuminated digital signs.

The question was added to the special town meeting ballot at the request of Selectman Paul Yates after the Bristol Parks and Recreation Commission and Bristol Fire and Rescue jointly purchased an electronic sign for Ellingwood Park.

Yates said the signs “just didn’t fit in, for me, with the town of Bristol.”

“If the town sets a precedent … it just could go on and on and on,” Yates said. “I didn’t think it was for three or four people to decide if this should be here.”

Yates also said he doesn’t feel the signs fit with the “historical tone” of the town.

Brackett, Means, and Slade Moore each separately expressed concerns about safety issues related to motorists trying to read the new sign while driving.

Hanna said the topic could lead to a deeper discussion of the creation of a sign ordinance. The only current regulations on signs in Bristol are in the shoreland zoning ordinance and the Maine Department of Transportation standards for setbacks along state roads, Hanna said. The sign at Ellingwood Park complies with both.

The selectmen will hold a second public hearing about the special town meeting warrant in the town office at 7 p.m., Wednesday, June 26.