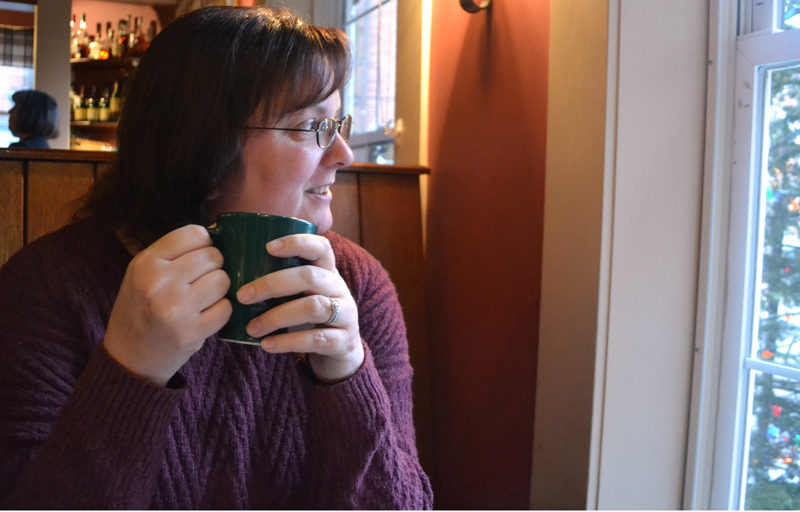 Looking ahead: After 15 years with the Bristol town office, including 14 1/2 years as Bristol’s first town administrator, Kristine Poland is concluding her tenure. (Maia Zewert photo)

As 2016 comes to a close, so will Kristine Poland’s tenure as Bristol’s first town administrator.

Poland moved to Maine from California in 1987. After she and her first husband divorced, she took a job at a bank, but eventually began to feel a bit stifled by the corporate environment.

After leaving the job, she found an employment opportunity that interested her: joining the staff in the Bristol town office.

Poland joined the town office in May 2001. Less than a year later, Bristol voters overwhelmingly approved a change in the town’s government during the annual town meeting March 19, 2002.

Twenty-seven people applied for the new position. The Maine Municipal Association narrowed the list of candidates to 12, and the Bristol Board of Selectmen interviewed four finalists.

Poland, after receiving support from the other members of the town office staff, was one of the four finalists.

“When it came down to the final selection, we knew Kristine understood how things worked in the office and in the town, and she was very eager to learn more,” Chad Hanna said.

Hanna, the current chairman of the board of selectmen, was in his first term as a selectman during the interview process.

“It was a brand new position, and we were all working through what we wanted it to be, and Kristine was willing to put in the time to work through it with us,” Hanna said.

Poland assumed the role of town administrator July 1, 2002. Hanna credited Poland’s ability to place the concerns of the community and Bristol residents at the forefront as a factor in her success as town administrator.

“The thing about Kristine is, she always understood all the sides of an issue and what direction the town was headed in,” Hanna said. “She always made sure that different people in different committees knew what was going on, and she was very good at advising the committees that way.”

Poland said her approach to the job developed over time based on the needs and wants of the selectmen, board and committee members, and residents of Bristol.

“I really tried to stay in the background and offer support, rather than making it about me,” Poland said. “The best part of this job is the knowledge and dedication of the volunteers, and I’m humbled and impressed by that.”

Over the years, Bristol has had a number of topics that drew townwide conversation, including the addition of Bristol Consolidated School’s public pre-kindergarten program in 2012, ongoing dialogue about the University of Maine’s proposed offshore wind project, and the current discussion regarding the Bristol Mills Dam.

Throughout all the discussions, Bristol has maintained stability, thanks in part to Hanna’s presence on the board of selectmen, Poland said.

“I think we’ve navigated those changes and any discussions very well, and I’m proud of that,” Poland said. “Sometimes meetings have gotten emotionally charged, and it’s not going to be all happy times, but we’ve worked through it, and for that reason, nothing has felt big or defining.”

During the annual town meeting in March, Bristol voters approved a warrant article to separate the duties of town clerk from those of the town administrator. Rachel Bizarro, a member of the town office staff, has since become Bristol’s town clerk.

In addition to her role as Bristol’s town administrator, Poland also sits on the executive committee of the Lincoln County Regional Planning Commission, and intends to continue in the post. She was until recently the president of the Maine Municipal Tax Collectors and Treasurers Association, but has resigned from that role.

In December 2015, after almost 14 years as town administrator, Poland started to consider whether it was time for Bristol to have a new administrator. She asked for a one-year extension of her contract. In September, she told the selectmen that she did not plan to ask for a renewal.

“I’ve been very fortunate to have the ability to live and work in the same community, and I’m glad I’ve had the opportunity to help people whenever I could,” Poland said. “I feel like it’s my purpose to be positive and support people, and it’s very hard for me to say ‘No, I can’t help you with this.’”

The Bristol Board of Selectmen has received 28 resumes for the position, and will meet with the two finalists later this week.

While Poland said she is looking forward to meeting the new town administrator, she does not plan to offer her successor any advice.

“My experience as Bristol’s first town administrator is going to be very different than the next person’s, and I want them to be able to take their time and decide for themselves how they want to approach things,” Poland said.

“I will stay connected to Bristol because it’s home. This is where we’ve landed,” Poland said.

Poland said she plans to take some time before deciding what she would like to do next.

“I have this theory I do things in 15-year increments. I like long-term gigs,” Poland said. “I’m not interested in just some job. I want to look for my next career.”