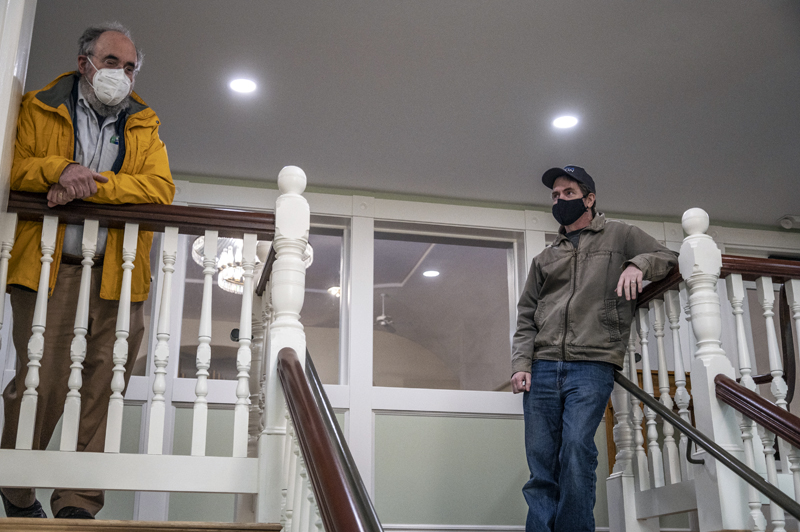 The award is given for historic preservation and “focuses on the transformative rehabilitation of historic buildings and the people that make it possible.”

Broad Bay Church earned the award for its preservation of the building at 941 Main St. The project took about four years and cost $900,000.

“We were totally inaccessible,” said Jonathan Clowes, a building committee member. “We had two bathrooms, one under the stairs in poor shape. We had no lift, and we have an older population. The steeple was sinking and leaning.”

“Old buildings are old buildings,” said Brian Scheuzger, another building committee member. “Some of our members started defining what work needed to be done.”

To determine the cost of the project, they had Barba + Wheelock Architects from Portland assess the building and provide estimates.

“I know Barba; we are in the same profession. They work with churches, so we had them come out and do a full estimate,” said Clowes, an architect.

The project was estimated to cost $1.4 million.

To pay for it, the church was referred to the National Fund for Sacred Places, who awarded a $250,000 grant. The church also received a grant from the Maine Steeples fund in the amount of $60,000.

“Once we realized we could raise about $500,000 within the community and congregation, we could do about half of the project,” said Clowes. “We had a very generous community with some pockets.”

Reconstruction was done to the steeple and the narthex of the church. New bathrooms were installed on both the entrance level and the upper level of the church sanctuary. To the left by entryway of the original doors is a lift for physically limited congregation members.

How the church became aware of the award was a mystery to them.

“We were nominated for the Maine Preservation award by someone we don’t even know,” said Clowes. “It’s like we had these angels looking out for us.”

According to its website, Maine Preservation is a statewide non-profit organization that was founded in 1972. Its mission is to “promote and preserve historic places, buildings downtowns and neighborhoods…” The organization has been hosting these awards since 1998.

A recording of the virtual awards ceremony is available on Maine Preservations YouTube channel, and through Broad Bay Church’s website at broadbaychurch.org.