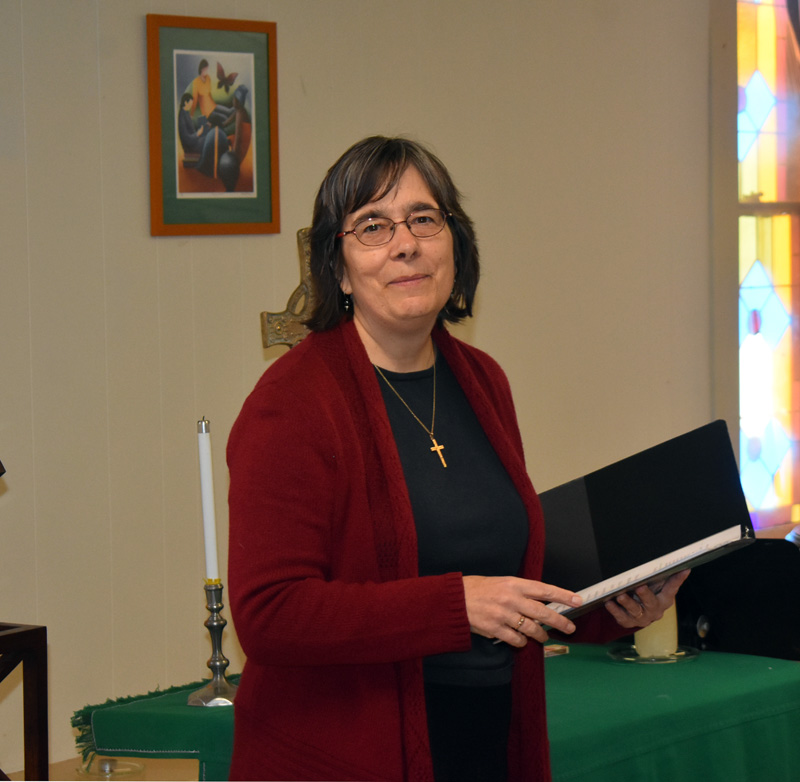 The Rev. Nancy Duncan, pastor of Waldoboro’s Broad Bay Church, thanks all those who made phase one of the church’s renovation possible during a ceremony Friday, Nov. 8. (Alexander Violo photo)

Broad Bay Church broke ground on a first phase of renovations for its historic home in Waldoboro village the morning of Friday, Nov. 8.

The Rev. Nancy Duncan, pastor of Broad Bay Congregational United Church of Christ since 2004, led a short ceremony outside the church, including the ringing of the church’s bell. She thanked the church’s past and present members, the community, and all those who made the renovation possible.

According to Brian Scheuzger, a church member and Waldoboro architect who co-chairs the Broad Bay Church Building Committee, the first phase of renovations will focus on the structure, while phase two will deal with the interior.

“The goal right now is to take care of the major structural issues,” Scheuzger said.

The first phase will include construction of a new foundation for the church’s steeple.

“The steeple currently leans, so the structure will be repaired and set straight,” Scheuzger said.

The church was built in 1838 with a smaller steeple. The current steeple and narthex, an architectural term for the entrance-lobby area, are believed to have been added in the latter half of the 1800s, according to Scheuzger.

The church has an acronym to explain the purpose of the repairs: SAFE – structural, accessible, flexible, for everyone.

Scheuzger said work in the narthex will include the addition of a new lift, which will allow people to move between the three levels of the church.

“It is basically an open-roofed elevator, with enough room for someone in a wheelchair and another person who can come in from the street and go up to the sanctuary level or down to the fellowship level,” Scheuzger said.

The goal is to complete the first phase of renovations in April.

“We are hoping to have our first service on Easter 2020, if everything goes well,” Scheuzger said.

Dorothy Petersen, chair of the church’s board of trustees, welcomed those in attendance at the ceremony.

“I’m really astounded and grateful we have reached this place,” Petersen said.

“When the construction costs increased from the original estimate, I was thinking, ‘How do we do this? How do we go back and ask for more money?’” Petersen said.

Many people came forward with sizable donations that allowed the church to move forward.

Before concluding her remarks, Petersen recognized a woman in attendance, Jeanette Achorn, who was married in the Main Street church 67 years ago.

Duncan, the pastor, described the church and its steeple as a historic marker for Waldoboro’s downtown.

The First Baptist Church erected the building and occupied it until moving to a larger, more modern building off Route 1 in 2002.

“Broad Bay Church was formed 35 years ago by a group that sought, no, was determined, to build a Unified Church of Christ in Waldoboro,” Duncan said. The church met in the former Meenahga Grange on Main Street.

When the First Baptist Church moved in 2002, the approximately 30-member Broad Bay congregation bought the building at 941 Main St.

Duncan said Broad Bay Church strives to be a place for all and the condition of the old building was getting in the way of this aim.

In May, the church celebrated its 35th anniversary and reached its fundraising goal. The campaign raised more than $500,000, securing a $250,000 match from the National Fund for Sacred Places.

The church also received a $60,000 grant from the Maine Steeples Fund,  which supports local efforts to assess and restore church steeples.

According to Scheuzger, when costs came in a little higher than anticipated, the church was able to find savings by putting off aesthetic work and building an emergency exit itself.

“We are going to do that piece ourselves. The emergency exit will be on the front end of the sanctuary, opposite from where you come in,” Scheuzger said.

The builder for phase one is H.E. Callahan Construction Co., of Auburn. Preservation Timber Framing Inc., of Berwick, is working on the steeple.

The architecture firm for phase one is Barba + Wheelock Architecture, Preservation + Design, of Portland. A consultant, Full Harvest Fundraising LLC, of Steep Falls, also worked with the church on the project.

(Correction: An earlier version of this article online and on the front page of the Nov. 14 print edition incorrectly reported that the building dates to 1832 and its steeple to 1838. The church was built in 1838 with a smaller steeple. The current steeple is believed to have been added in the latter half of the 1800s. The Lincoln County News regrets the error.)