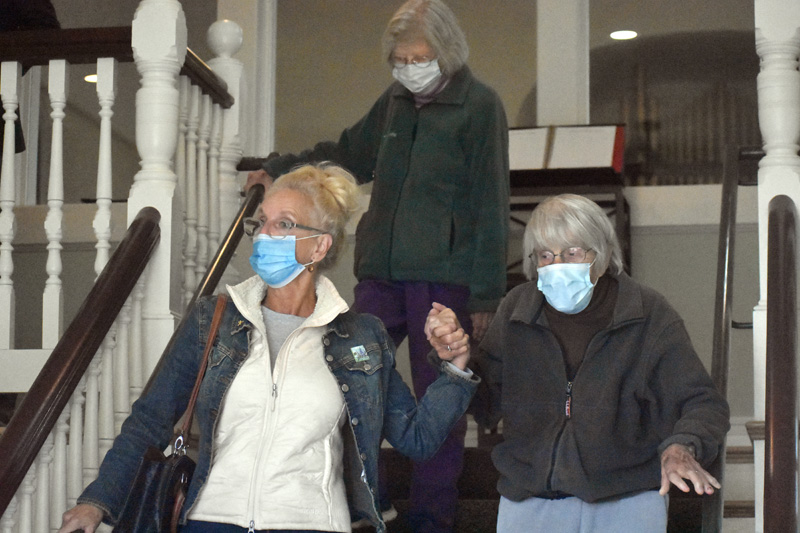 Broad Bay Church celebrated the completion of the first phase of renovations to its historic building in Waldoboro village with tours for small groups Saturday, Oct. 10.

According to Brian Scheuzger, a church member and Waldoboro architect who co-chairs the Broad Bay Church Building Committee, the primary goal of the first phase was to address structural issues.

The phase included construction of a new foundation for the church’s steeple. “It is not going anywhere,” Scheuzger said.

Another element was the addition of a lift to the narthex, an architectural term for the lobby area. The lift allows movement between the three levels of the building with ease.

The main doors to the church now open outward, toward the street, instead of inward, according to Scheuzger.

Other renovations include the replacement of numerous heavy timbers, new interior windows in the sanctuary, new windows in the fellowship hall, new water service and heat for the narthex, and the removal of a leak-prone 1960s annex. 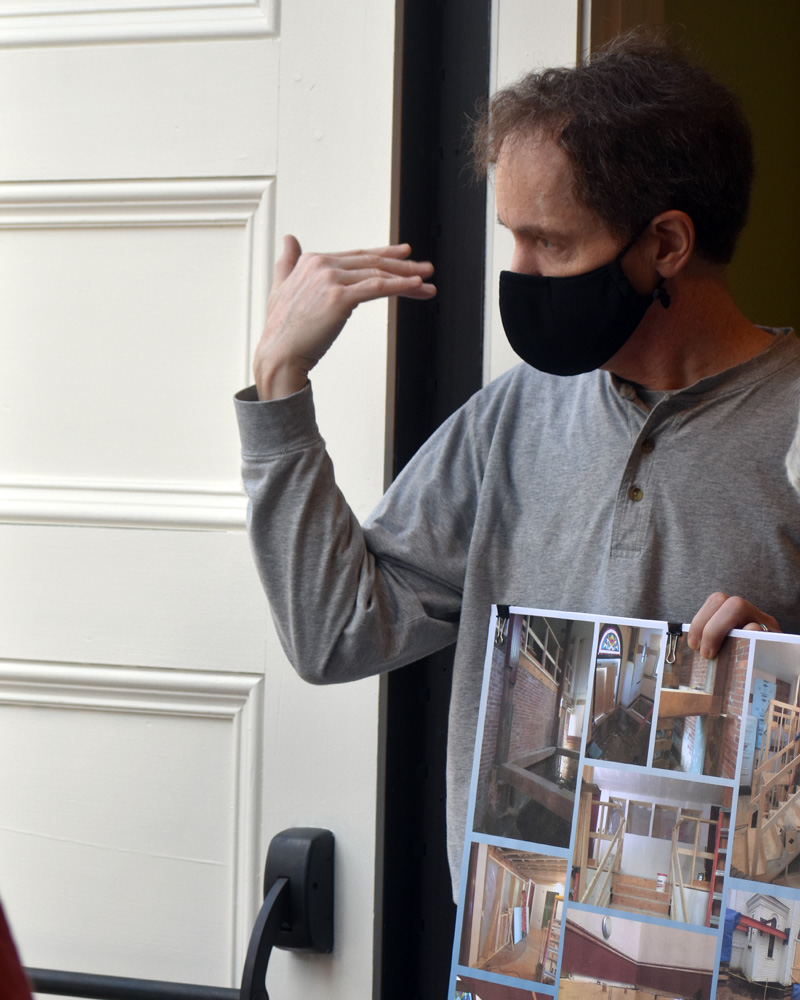 The building committee was mindful of the church’s history, reusing all the newel posts and balusters from the original narthex in the new main staircase, according to Scheuzger.

The Rev. Nancy Duncan, pastor of The Broad Bay Congregational United Church of Christ since 2004, spoke highly of the renovations, which started in November 2019.

“It is just fabulous. I’m so impressed with what they did,” Duncan said.

Scheuzger said the first phase was completed Sept. 1, when the new lift passed its state inspection.

Duncan believes the renovations have made the church a more accessible and welcoming place.

“When people come through the door, they can see up and know where they are going,” Duncan said. “It’s accessible for people in wheelchairs and in strollers.”

During the tours, people ages 2-90 used the new lift.

“The sanctuary feels so much closer to Main Street. Given we are a place for all, it is so important that the space between the building and the street is permeable,” Duncan said.

Three church members, Faye Ainsworth, Elise Merrifield, and Elizabeth Sproul, on hand for the first tour of the day were pleased with the results of the renovations.

“It is gorgeous. They did a beautiful job,” Merrifield said.

Sproul agreed. “It really is welcome for all,” she said. “A place for all” was the motto of the church’s capital campaign. 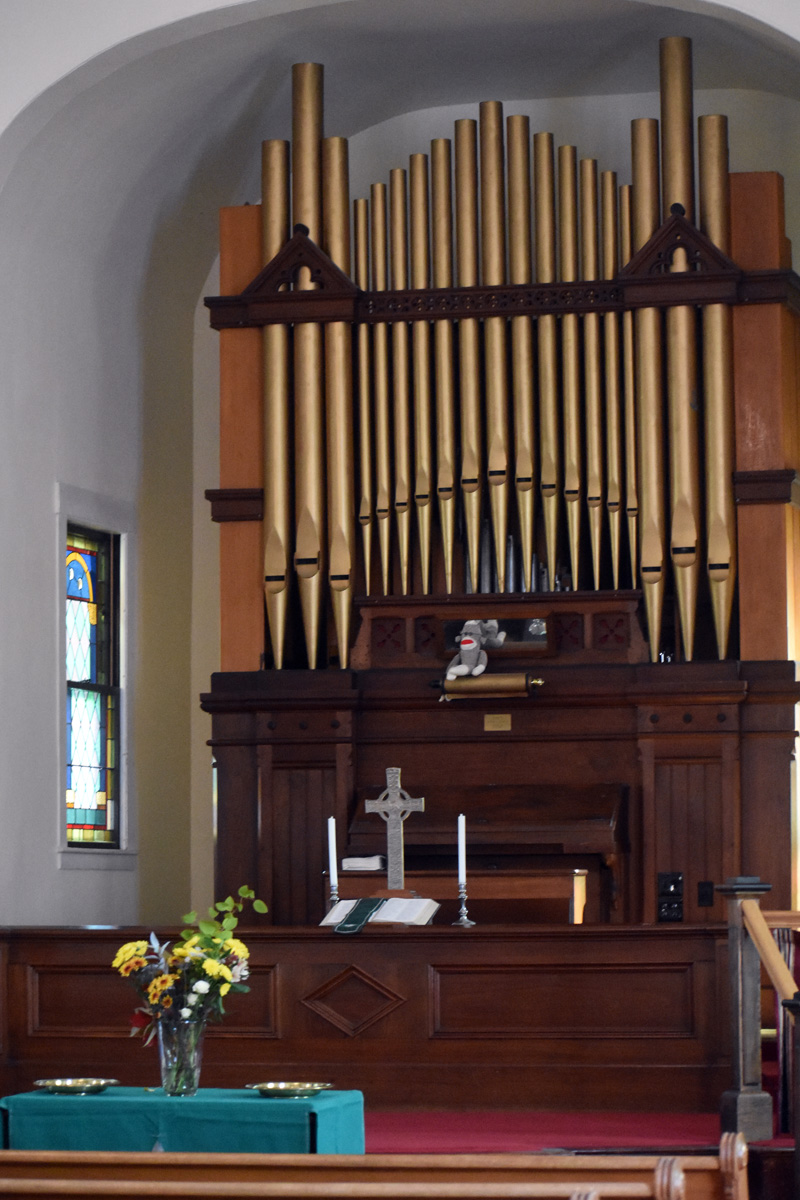 The historic organ at Broad Bay Church in Waldoboro. Though the organ itself was not part of recent renovations, the work did ensure the stability of the church’s foundation, which will help to preserve the interior space. (Alexander Violo photo)

According to Scheuzger, the first phase of the renovations was scheduled to be completed by Easter 2020, but the COVID-19 pandemic delayed the process.

The church was built in 1838 with a smaller steeple; the current steeple is believed to have been added in the latter half of the 1800s.

The First Baptist Church built and occupied the building until moving to a larger, more modern building off Route 1 in 2002.

When the First Baptist Church moved, the approximately 30-member Broad Bay congregation, formed in 1984, bought the building at 941 Main St.

The church had previously met at Meenahga Grange, on Main Street, and at the home of Carol Hakkila, who was on hand for the tours Saturday.

A capital campaign to fund the renovations started in August 2018 and raised more than $500,000, securing a $250,000 match from the National Fund for Sacred Places.

The church also received a $60,000 grant from the Maine Steeples Fund, which supports efforts to assess and restore church steeples.

A consultant, Full Harvest Fundraising LLC, of Steep Falls, also worked with the church on the project.

Noah Bly, of Ridge Forge Metal Works, in Tenants Harbor, was commissioned to create the railings for the ramp at the front of the church.

A celebration and ribbon-cutting ceremony will take place when the public health situation allows for larger gatherings.

“We are going to have a grand reopening as early as we can next year, when it is safe,” Scheuzger said.

The church has held Sunday services via Skype since March and will continue to do so until it is safe to reconvene in person, according to Duncan.

The second and final phase of renovations, for now, will tackle the lower level of the building. Scheuzger said the timetable is to be determined, but that work is probably several years away.