About 35 people attend a lively conversation about the future of high-speed internet access at the Central Lincoln County YMCA in Damariscotta on Tuesday, Sept. 24. (Evan Houk photo)

The two organizations co-sponsored a public discussion, attended by about 35 people, dubbed “A Regional Conversation: The Future of Broadband in Your Community,” held at the Central Lincoln County YMCA in Damariscotta on Tuesday, Sept. 24.

Mary Ellen Barnes, executive director of the Lincoln County Regional Planning Commission, opened the meeting by saying dependable and high-speed broadband is essential for the small business-based economy in the Midcoast.

The Portland Press Herald summed up the situation facing rural Maine communities in an editorial from May 29: “Getting high-speed internet the ‘last mile’ from an established network to an area that doesn’t have it yet is expensive and thus requires enough potential customers to make it worthwhile. In places where that calculus doesn’t work out for an internet provider, they simply don’t extend the line.”

The focus of the evening was discussing the best ways to get high-speed internet access beyond that “last mile.”

Barnes said the commission has received a community planning grant from the ConnectME Authority, the state agency charged with establishing universal broadband availability for all Maine businesses and households, and is working with seven towns in Lincoln County to improve access.

The Island Institute laid out a community-driven broadband process in an informational handout available at the meeting. This approach involves a combination of public grant funding, working with internet service providers, and engaging the community directly to build broadband infrastructure in rural areas.

The Island Institute acknowledged that Maine communities pride themselves on being unique, even in their broadband solutions.

“After working with over 30 communities, however, we’ve identified a set of best practices and necessary steps that can help guide a successful community-driven broadband process,” reads the Island Institute’s info sheet.

“I think it’s important to start off this conversation tonight with some local context. … You all know broadband is important, but you’re trying to figure out the ways to start talking with others in your community,” Christa Thorpe, community development officer for the Island Institute, said as she introduced the first panel.

Flewelling discussed the challenges facing students who do not have reliable internet access at home. 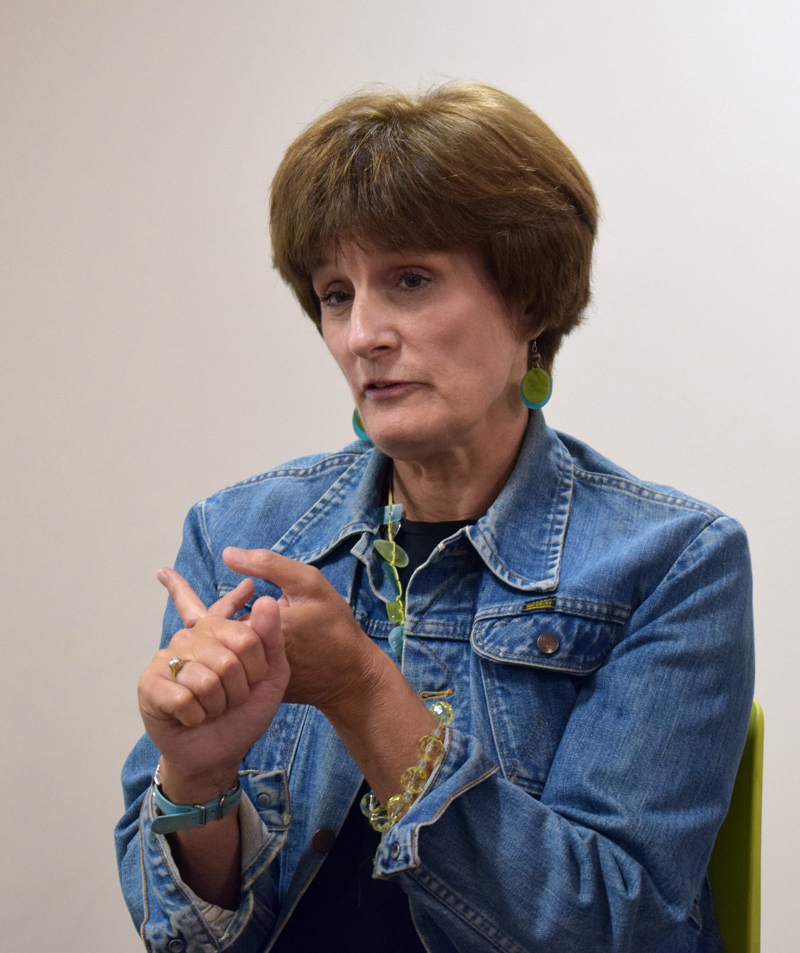 Peggy Schaffer, executive director of the ConnectME Authority, talks about how to fund expansion of high-speed internet access during a forum at the Central Lincoln County YMCA in Damariscotta on Tuesday, Sept. 24. (Evan Houk photo)

He also talked about SpaceX’s new program Starlink and its plan to provide affordable high-speed internet via low-orbit satellites within the next few years as a “light at the end of the tunnel.”

“Their goal is to put something like 12,000 low-orbit satellites, creating a global network where by the end of 2020, I believe, they’ll be providing low-latency high-speed internet to the southern U.S. And by the end of 2021, hopefully covering the northern U.S.,” Flewelling said.

Business Insider reported on May 16 that Elon Musk, founder of SpaceX, says he hopes that in the future individual users will be able to connect to Starlink’s internet access with small terminals that cost about $200.

Baybutt spoke to the need for high-speed internet in the emerging field of telemedicine, which increases doctors’ access to patients by conducting remote check-ups via videoconference.

McPherson and Withers both discussed how access to internet is vital to their abilities to work locally.

The bulk of the second panel’s discussion centered around the work the ConnectME Authority is doing and ways to effectively apply for and receive grants from the state agency.

Peggy Schaffer, executive director of the ConnectME Authority, explained the funding model and intent of the agency and encouraged communities to engage residents and rally support for broadband.

Schaffer said internet service providers such as Tidewater Telecom will be more likely to fund expanded broadband access if they know they will gain new internet customers.

The Jefferson Broadband Committee is circulating a petition throughout the town to gather support for expanding broadband access. The petition intends to see how many people would sign up for a new internet service if it was available.

Schaffer explained how the Federal Communications Commission’s mapping data on underserved broadband areas, which are defined as any home without an internet connection or a with a connection speed below 25 megabits per second (mbps) download and 3 mbps upload, is flawed.

“What they require providers to give them for data is areas that they serve at an advertised speed, and they do it by census block. And if one home in that census block is served, or could be reasonably served, then they consider the entire census block served,” Schaffer said.

Schaffer said that since last year, ConnectME has been collecting more reliable data from various internet service providers in Maine.

Regional representatives of U.S. Sens. Susan Collins and Angus King were also on the second panel to speak to various federal initiatives concerning broadband that are pending in Congress.

Scott Wilkinson, a representative of King, said one of his broadband priorities is updating outdated or nonsensical regulations, such as how underserved areas are identified.

In order to attract broadband service everywhere, it appears Lincoln County municipalities will have to get creative, and possibly work together.

“I used to have a boss … that said that the biggest problem in economic development in Maine is high school sports, because it pits towns against each other,” Schaffer said to laughter.

“But it’s a problem we have in Maine, is that people don’t like to work with each other,” she continued.

“We do have a model of doing some things county-wide, offering services. Maybe there is an opportunity to get towns thinking alike if we were doing something at the county level, trying to offer help with a regional backbone and building out the ‘last miles’ from that,” Somerville First Selectman Chris Johnson said toward the end of the open question-and-answer session.