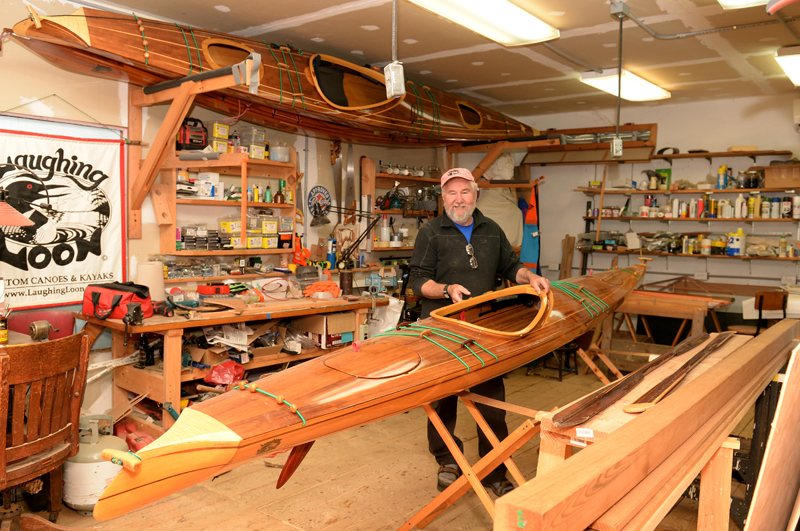 Rob Macks easily lifts a 28-pound kayak he made in his Laughing Loon workshop in Jefferson. (Paula Roberts photo)

Rob Macks, of Jefferson, uses his artistic background and eye for beauty and detail to build high-end wooden-strip vessels at his Laughing Loon Custom Canoes and Kayaks workshop on Route 126.

He is passionate about the boats and his background and talent make his boats beautiful works of art.

His designs are inspired by aboriginal Aleut and Greenland hunters and fishermen who earned their livelihood from the sea.

“There is no greater motivation to perfect a design than to stake one’s life upon it,” Macks said. “The Inuit and Aleut staked their lives on their boats every day. They acquired great knowledge of the sea through a lifetime of experience and generation after generation of that experience infused their kayak designs, which evolved to perfection.”

“Designing and building these boats combines my deep love of the outdoors, especially the water; my 66 years of experience in powerboats, sailboats, wilderness canoeing, whitewater canoeing, and sea kayaking; my training as an artist and sculptor; and my many years of metal, woodworking and design engineering,” Macks states on his website.

Macks also sells building plans for his canoes, kayaks, and paddles, for the do-it-yourselfers. He receives many emails from around the world with photos of boats built using his designs.

A former college professor, Macks knows the importance of “giving people good information and accurate information.” He has received thank you notes from all over the globe for his plans, and for his free tips online.

He has developed a video that demonstrates how to make a strip-built wooden boat. He also offers several strip-building classes throughout the warmer months. Tours of his workshop are available at a cost of $35 an hour. 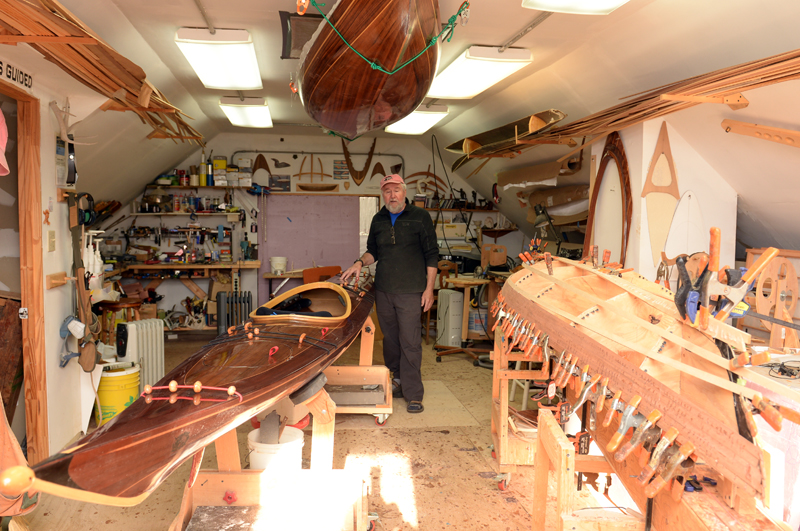 Rob Marks in his upstairs workshop at Laughing Loon in Jefferson. The kayak on the right is being stripped up, while the one on the left is completely finished and ready to be shown at a craftsman shop in Rockport. (Paula Roberts photo)

As a boy, Macks summered in northern Ontario at his family’s camp, where 60 percent of the area is lakes. He sports a Canadian pin on his Laughing Loon hat as a reminder of days spent on the water and in the woods of his childhood.

His father, a hunter and fisherman, was 47 years old when Macks was born. “When I was in my teens, he was losing interest and energy,” Macks said of striking out on his own and exploring the great outdoors.

“I loved the outdoors,” Macks said of the adventures of his youth, by canoe or by skis, through the wilderness. “Once I was out there a week and never saw anyone.”

Macks spent the rest of the year in Michigan, where he was born, on Lake St. Clair. “I have always been around water,” he said.

Like Papa Bear in the “Berenstain Bears” children’s book series, Macks’ father “taught me what not to do,” he said. “Learning things is important. You have to learn the good with the bad. When you do it wrong, then do it right, you learn in a way with much greater depth.”

As a kid, Macks only knew wooden boats. “There is something about a wooden boat. It is an experience you remember,” he said.

A motorcycle accident at the age of 17 broke his leg above and below the knee. Recuperation took two years and left him with one leg shorter than the other, for which he wears a built-up shoe. Once back on his feet, Macks hiked the White, Green, and Adirondack mountains. “The biggest disability is between the ears,” he said.

He graduated from Wayne State University with a bachelor’s degree in 1975 and a master’s degree in 1979, both in sculpture and design. He was a professional woodworker, making cabinets and furniture, from 1986-1990. He taught at Wayne State for a couple of years before moving to Massachusetts, where he taught sculpture and design at Amherst College and drawing classes at the Leverett Craft Center.

He met his wife, Sandra Redemske, a graphic designer, on a whitewater paddling trip in Massachusetts.

Sandra loved gardening and wanted to start a farm. They started to look for a bigger place and at first looked to Vermont, but the lure of the sea called Macks to Maine. He had spent every Labor Day weekend for many years paddling the Dead River, and, like many people, fell in love with the state.

The Maine Organic Farmers and Gardeners Association sealed the deal for Sandra, an organic gardener, and the couple, who researches everything they do, moved to Maine in 2006. 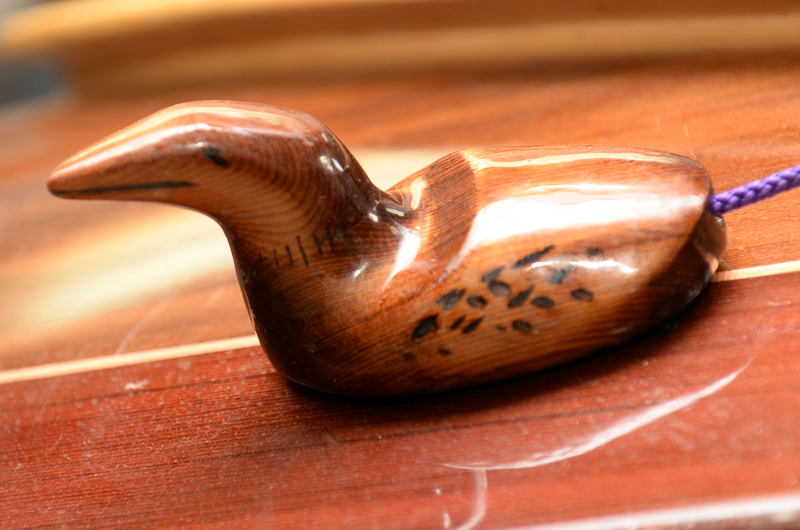 A hand-carved loon controls the skeg on a kayak made by Rob Macks in his Laughing Loon workshop in Jefferson. (Paula Roberts photo)

Tired of the corporate workplace and exposure to chemicals, the couple moved into a post-and-beam house in Jefferson, where they raise most of their food.

Sandra now runs ChickGooEwe Farm on their property, raising chicken and goose eggs and lamb. They share a love of being on the water.

“Ours is a real partnership,” Macks said. With Sandra’s background in graphic design, and her computer and business skills, she is a huge asset to his business.

Macks’ first canoe, in the 1980s, was made out of aluminum. He went on a canoeing trip with a friend who had bought a 50-pound Kevlar canoe. His 80-pound aluminum boat was heavy in comparison and difficult to portage.

About the same time, his friend Norm Sims showed him a 55-pound strip-built canoe he had made. “I stood there with my mouth open. I didn’t know he could build anything and he made this. It changed my life,” Macks said.

Rob Macks with two paddles he makes in the Greenland and Aluet styles. (Paula Roberts photo)

He was working as a woodworker and carpenter in Massachusetts when he decided to build a canoe. His love of the outdoors and his training as an artist had made aesthetics an integral part of his life. “I love making things. Making things is magic,” he said.

As an artist, Macks did not like the looks of lots of furniture, so built his own. He sculpted metal into jewelry and wood into beautiful furniture. “I did not know I could build a boat,” he said.

While still working as a carpenter, he starting doing research and then built his first canoe.

“When I started designing boats, I was reminded of a statement by one of my art history professors: ‘Most every design you see today is the shadow of some inspiration from the past. If you wish to find fresh inspiration, seek out that source.’ And so, I have studied aboriginal boat designs through the most eminent books on the subject and studied aboriginal boat exhibits at most marine museums and storage collections in the east, including the Smithsonian in Washington, D.C.,” he said.

These aboriginal people depended on fish and mammals to sustain them during harsh winter weather, when waves reached 12-25 feet.

While on a whitewater paddling adventure, Macks saw his first sea kayak, and “had to build one for myself,” he said.

He read everything he could get his hands on and went to several museums in New England and to the Smithsonian to research baidarka-style vessels made by the Aleut Eskimos of the North Pacific Aleutian Islands, and boats built by natives of Greenland.

In 1991, one of his boats appeared in the Launching section of WoodenBoat magazine.

“People started calling wanting building plans, so I started to do plans,” Macks said of selling his original designs. He now builds and sells vessels and plans for 12 different kayak and canoe designs.

One of his lightweight kayaks weighs just 28 pounds. “With my experience of portaging canoes, I looked into every way I could make it as lightweight as possible,” he said. He thought about some of the half-mile portages he has taken and figured out a way “to make them lighter but still strong.”

“Beautiful is part of my DNA. I wanted a lightweight boat of outstanding design,” he said.

His paddling experience on whitewater in New England peaked his interest in developing a craft that could handle the high seas.

“When I first saw people paddling whitewater, I thought they were crazy,” Macks said. As he gained experience, he saw patterns on the water and learned the signs of navigating the turbulent water. It was then that he made a correlation with those who have “paddled the ocean for thousands of years.”

He thought of snowshoes and skis, and realized the boats of Greenland skied down the waves, which made them skim across the water faster. “I believe they understood water so well,” he said.

Macks also studied the paddles made by the Aleuts and Greenlanders, which are narrower, but longer than the traditional paddle of today. The narrower paddle actually has more surface area, which provides more thrust per stroke.

“Once up to speed, it does not take as much energy to keep you going,” he said. “The paddles are also more flexible, both physically, and in the way they can be paddled depending on the conditions on the water.”

His Greenland model kayak has a skeg, or fin, on the stern, which improves tracking in windy conditions. The Greenland bow design allows the craft to cut into the waves and keep the vessel firmly planted in the water.

Macks has an acute attention to detail, from cutting and gluing 3/4-inch strips of various kinds of wood to finishing off the boats with fiberglass cloth to applying multiple coats of epoxy to sanding and applying a marine spar varnish as a finish coat.

The hatches on the kayaks are attached with strong, rare earth magnets. He finishes off the kayaks with carved fish and loons. Like the Aleuts and Greenlanders before him, Macks pays tribute to the fish and animals who sustained them.

He has won awards at the Wooden Boat Show in 1991 and in 1994. In 1992 he won a WoodenBoat award for Outstanding Paddlecraft for the 35-pound Panache, inspired by a native West Greenland kayak design. 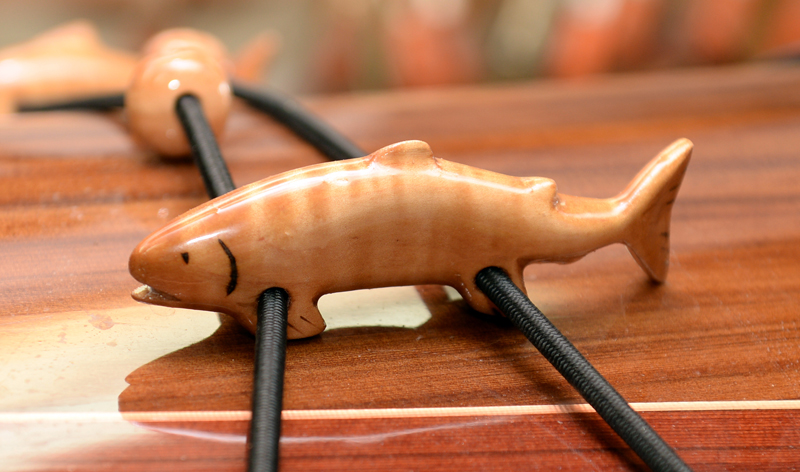 Like the Aleut people, Rob Macks puts images of fish and small animals on his kayaks to honor the creatures who sustained them. (Paula Roberts photo)

“This is my passion. I believe everyone has a gift. The secret is to find your gift and your purpose is to show off your gift,” Macks said.

“I am compelled to build these small, wonderful boats,” he said. “My hands guide every moment of my creation, from rough boards to gleaming varnish. I personally devote months to the creation of each finished boat.”

Macks will exhibit his Ootek kayak at the Center for Furniture Craftsmanship in Rockport starting Jan. 22. The Ootek is named for a fictional Inuit hunter from Farley Mowat’s book “Never Cry Wolf.” The design is inspired by the kayaks of West Greenland. It is made primarily of red cedar.

For more information, go to laughingloon.com.