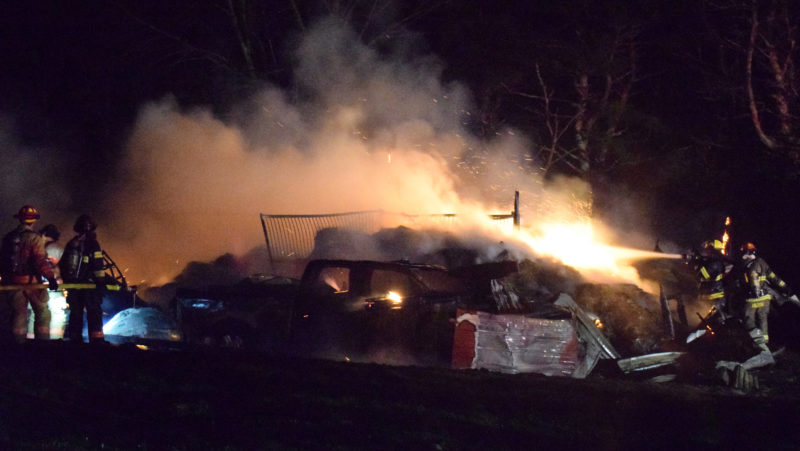 Firefighters work to contain a blaze in a barn at 116 Lynch Road in Newcastle the early morning of Friday, Nov. 1.  (Evan Houk photo)

A Newcastle farm lost a barn, as well as two haflinger horses, six miniature donkeys, and a pickup truck, in a fire at 116 Lynch Road early Friday, Nov. 1.

Margaret Sproul owns the property, Sproul’s Farm. In an interview Tuesday, Nov. 5, she said the animals and even the equipment inside the barn were a huge part of her life. She had raised and trained the horses since they were 1 and 2 years old.

“They just did everything for me. I rode them, showed them, I jumped, my grandkids crawled under their bellies. … They were beautiful. I was incredibly proud of them,” Sproul said.

She said that after a full day of investigation, the Maine State Fire Marshal’s Office deemed the cause of the fire “undetermined,” although investigators told her it started inside the barn.

Sproul had trained the horses, Paul and Tony, for the past 16 years and showed them at competitions throughout their lives.

Paul was a grand champion at the American Haflinger Registry’s national show and both horses were well known by visitors to Sproul’s Farm for the horse-and-carriage rides they provided.

The two stallions were registered with fancier names, Sproul said, but were never called by those names.

Sproul said that luckily, two mares who were raised with Paul and Tony had been moved to her sister’s farm for the winter.

Sproul said some of the miniature donkeys, which were used for breeding, were also grand champions at the nationals and popular with visitors.

“A lot of people who come visit, they all know the names. … They have the kindest, purest nature,” Sproul said of the miniature donkeys.

Sproul said she and her husband, Randy Wade, have been counting the days since the tragic loss of their barn and trying to focus on the future, hard as that is.

But she is extremely grateful for the support of neighbors, friends, and acquaintances. She said the messages of support she and Wade have received are helping them move forward.

Although insurance is expected to cover the couple’s financial losses, Sproul said their collection of harnesses and carriages, accumulated over a lifetime, and their barn full of national award-winning horses and miniature donkeys, can never be replaced. They do plan to rebuild the barn.

“It’s not about the actual individual products, it’s about the time and space it took to get there. And the horses, they created incredible memories,” Sproul said.