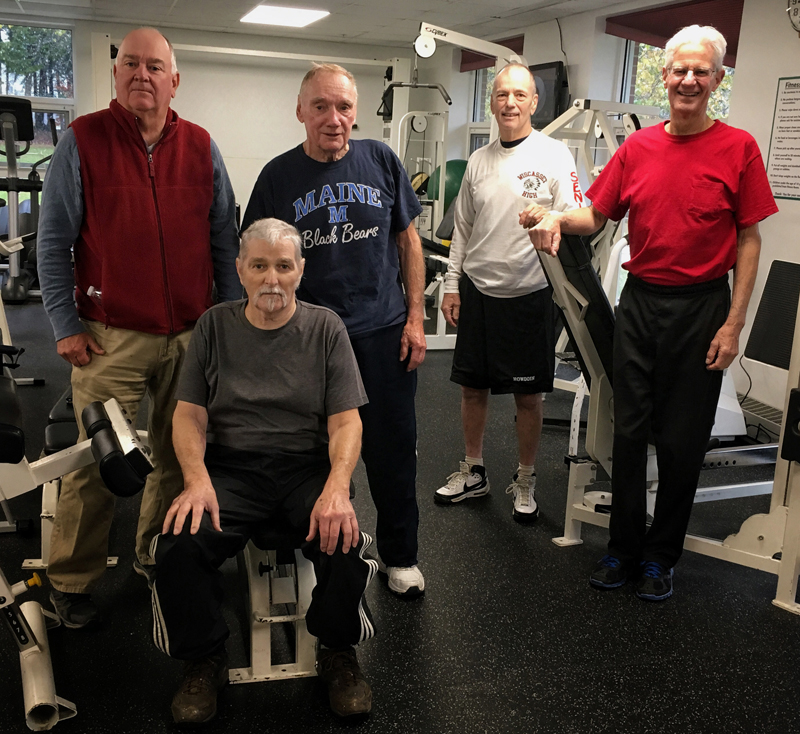 A small group of men, four of the five cancer patients or survivors, gathers at the Wiscasset Community Center several times a week to work out and support one another. From left: Bob Summers, Dan Plummer (seated), Phil Withee, Chuck Shea, and Glenn Milley. (Photo courtesy Katrina Willey)

United by their past as athletes and their present experience with cancer, five local men in their 70s and 80s gather to work out and support one another at the Wiscasset Community Center several days each week.

Dan Plummer, of Woolwich; Glenn Milley, Chuck Shea, and Phil Withee, all of Wiscasset; and Bob Summers, of Whitefield; meet at the center for the  informal support group, which developed spontaneously about eight months ago. Of the five, only Milley has not had cancer.

“We’ve been athletes most of our lives,” said Plummer, who has prostate cancer.

Shea, who is in remission after treatment for non-Hodgkin’s lymphoma, may have the most impressive resume.

He returned to Wiscasset High as a teacher and coach, leading the school to two state championships in cross-country. He was inducted into the Midcoast Sports Hall of Fame in October.

Though they grew up in neighboring towns and competed for area high schools, most of the men had never met before getting to know each other at the community center.

About eight months ago, Plummer was at the community center for a swim. His son said he had seen Shea sitting in the lobby. Plummer had known of Shea since they were both in high school, but had never met him in person. He introduced himself and shook his hand.

“That’s how it all started, and since that period of time, we’ve become friends,” Plummer said. He met the rest of the men over time.

Now, the men feel like they have always known each other.

“I call him my brother sometimes,” Shea said of Plummer.

Most of the friends meet about four times a week. They head to the community center around 7:30-8:30 a.m.

Shea said, “you don’t have to have a wall to join us,” referring to a cancer diagnosis. The men often use the term – “the wall” – for the disease.

After their workouts, the men hold court at a table in the lobby – the one closest to the front counter. They are celebrities of the community center. Other locals stop by, pull up a chair, and ask how members of the group are doing.

The men talk about activities they have in common and about their medical appointments. The atmosphere is generally positive.

“If I don’t feel well, I still come in here because it’s upbeat. I think it’s the same for the rest of the guys too,” Plummer said. “We look forward to coming and seeing each other.”

For their workouts, they like to swim and use the weight room. They bike in warmer weather.

After their diagnoses, it was not easy for the men to go back to being as active as they once were.

Withee, who was diagnosed about 15 months ago, said he never completely stopped being active, but the cancer and treatment slowed him down.

For Shea and Plummer, both diagnosed about two years ago, it was harder to start working out again.

When Shea started working out after chemotherapy, he could only lift 10- to 20-pound weights. He lost 50 pounds.

Now he is able to lift as much as he could before and has gained his weight back.

Plummer said finding out about his prostate cancer was like “hitting a wall.”

Plummer said most of the group goes to checkups every three to six months. They ask each other about their visits.

Other conversation topics include hunting and fishing, books, and, most important of all, high school sports.

Shea said tangents are common when the group is together, reminiscing about games and people they know.

They drink coffee and enjoy snacks during their talks. Plummer will make blueberry muffins or his wife will make whoopie pies.

“We all look forward to seeing each other and keeping tabs on each other,” Milley said.

The one conversation rule the group has: no politics.

Though the group does not have a fixed schedule, the members keep track of when they saw each other last. It feels like a “vacancy” when someone is missing for too long, Plummer said.

“If he was sick, I’d go over his house and talk to his wife and see what’s going on,” Plummer said of Shea. “Same thing with all of them; I can almost say we have come that close with each other.”