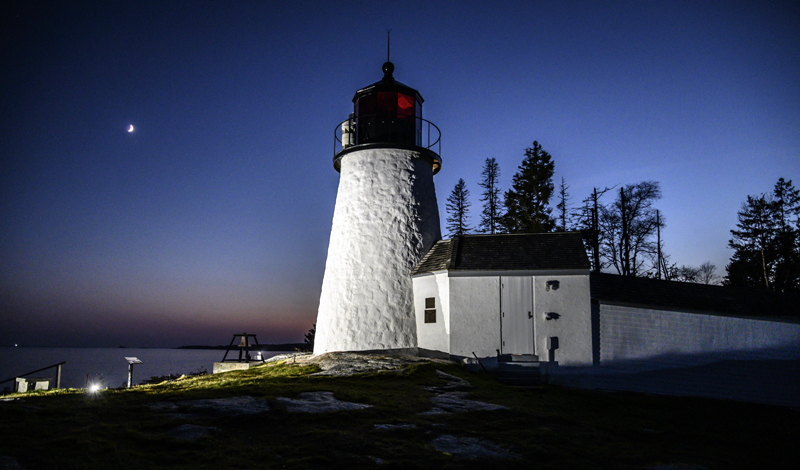 The moon rises as evening approaches the Burnt Island Lighthouse in Southport. The lighthouse is lit for the 73,000 time in celebration of its 200th anniversary of continuous service. (Bisi Cameron Yee photo)

On the rocky ground below Burnt Island Lighthouse an impromptu chorus of “happy birthday” broke out among those gathered Nov. 9 to witness as the lamp glowed red on the 200th anniversary of its first lighting.

Around 100 spectators assembled across the harbor at Spruce Point Inn in Boothbay Harbor to watch, as well. They were treated to a lighthouse art exhibit by local school children, lawn games, and refreshments as the sunset.

Elaine Jones’ last duty to the lighthouse that has been a central figure in her life for so long was to see it through the commemorative lighting.

In retirement she plans to use her experience as an educator with the nonprofit organization she founded, “Lighthouse Education and Nautical Studies,” with the appropriate acronym LENS.

She will invite teachers to join her on her 28-foot sea sprite to visit various lighthouses to learn their history, and pass on the knowledge gleaned from her years of experience with the preservation of the Burnt Island Light.

Three former keepers, Henry Sigg, Paul Kelly, and Randy Griffing were on hand to throw the switch and light the lamp.

Adam Smart, president of The Keepers of Burnt Island Light witnessed the lighting with his family. Smart is the chief petty officer in charge of the search and rescue station in Boothbay Harbor. His interest in Coast Guard history prompted him to volunteer with the organization.

Paul Kelly was the keeper from 1970 to 1973 and said he has mixed emotions on the 200th anniversary. He’s sad to see the need for a keeper and the way of life it represented disappearing, but knows that progress has brought necessary and positive change to Burnt Island.

Anna Griffing lived at the lighthouse with her husband Randy Griffing from 1974 to 1977. The couple had been married just a year when they were stationed at Burnt Island.

Anna worked in Boothbay harbor at a bank and Randy would take her across the water to work every morning. Anna remembers seeing the harbor filled with sailboats during Windjammer Days, and spending summers with her family on the island when they visited from Montreal.

Henry Sigg was the last keeper and was stationed at Burnt Island for five years.

The weather was much more favorable than it was at the 200th anniversary celebration in August. Spruce Point guests brought blankets, but the evening was balmy.

A fireworks display followed moments after the Burnt Island light began its six-second blinking rotation to much applause.