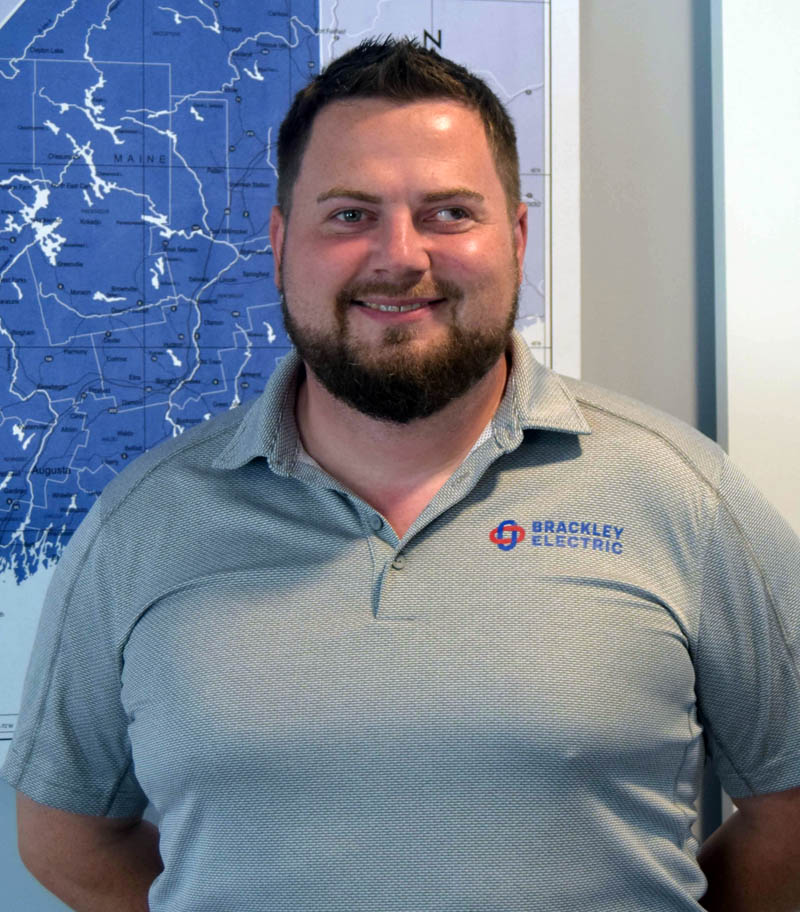 Born and raised in Maine, Brackley started his West Bath business, Brackley Electric, in early 2017 with business partners before taking over in 2019.

Brackley’s services include installing solar panels, and wiring commercial, residential buildings as well as marine vessels. In 2007, He earned his master electrician’s license through the Bath Iron Works program.

Operating a business over the last five years Brackley has experienced difficulty hiring people from the workforce. He said the state is enabling people to stay home. “I have tried to hire people and they declined because they would lose their benefits if they took a job,” he said.

Brackley believes one solution to the workforce shortage is expanding high school students’ access to trade programs that would position them up for immediate success in the workforce or long term success in college.

“I have worked with and taught students that are perfectly capable of learning these skills and these programs that would prepare them to get right into the workforce,” Brackley said. “If students go through an electrical or mechanical program they are much better positioned for an engineering or science degree in the future.”

Financial aid to companies that provide apprenticeship programs is another solution Brackley believes will help combat the labor shortage.

“We can provide tax breaks and subsidies to companies that provide apprenticeship programs,” he said. “We have subsidies right now but they are like $1,200 for a four year program. That barely covers the cost for books.”

“It’s not just in my industry, we hear it from others that work in trades,” Brackley said. “Regulations drive up cost of doing business.”

Brackley said he would support any bill that seeks to reduce regulations that are a burden on companies trying to hire.

Currently a commission convened by the legislature is investigating the impact short term rentals are having on the housing crisis. Brackley said he would like to see the numbers before committing to regulating these types of rentals throughout the state.

“I know that we have temporary workers in the health care and construction that use and need these places to stay,” Brackley said. “I am far more in favor of local government making decisions than any central government. A central government doesn’t necessarily understand how things work in Lincoln County versus Franklin County.”

In addition to addressing the workforce and housing shortage, Brackley believes solving the energy crisis facing Maine can provide relief for all Mainers facing different circumstances.

“Doing what we can to address the energy crisis at a local level will help everyone from business owners, to retirees, to people that are working,” Brackley said.

Brackley supports the use of renewable energy resources like solar and wind but warned of the limitations these energy sources have.

“I think solar and wind can be part of the solution but they only work when the sun is shining or the wind is blowing. During those periods we need to store energy and the batteries require gigantic amounts of rare earth metals that we do not recycle well,” Brackley said. “I think we would be setting ourselves up for failure if we only focus on those energy resources.”

Brackley believes we should focus on increasing hydro capabilities and revisit nuclear energy, pointing to its efficiency.

“Nuclear is far safer than we are lead to believe,” Brackley said. “Modern aircraft carriers are fueled one time for 50 years with nuclear power.”

On June 24, 2022 the Supreme Court overturned constitutional protections for abortion with the Dobbs v. Jackson Women’s Health Organization decision. The ruling allows state legislatures to pass restrictions on access to abortion. If elected to the senate Brackley would support legislation that restricts access to abortion.

“I believe the government’s job is to protect the innocent,” Brackley said. “We have been fed the lie that a fetus is just a clump of cells. It’s not. It is a human being with DNA.”

Brackley does support limited access to abortion in the event that a mother’s life is in danger and the fetus is not viable. He does not support abortion in the circumstances of rape or incest.

“I would not wish that on anyone. I know it is a complex issue but I still do not think the answer is to kill an innocent life,” Brackley said.

Senate District 24 covers Sagadahoc County and the town of Dresden, in Lincoln County. Brackley is running against incumbent Sen. Eloise Vitelli. This is Brackley’s first attempt at earning a political office. Brackley said his desire to lead by example motivated him to run.

“I was waiting for the adults in the room to focus on the right things and I thought maybe I am the adult I am looking for,” Brackley said.

The election for Senate District 24 will be held on Tuesday, Nov. 8.

For more information about the candidate go to mattbrackley.net.