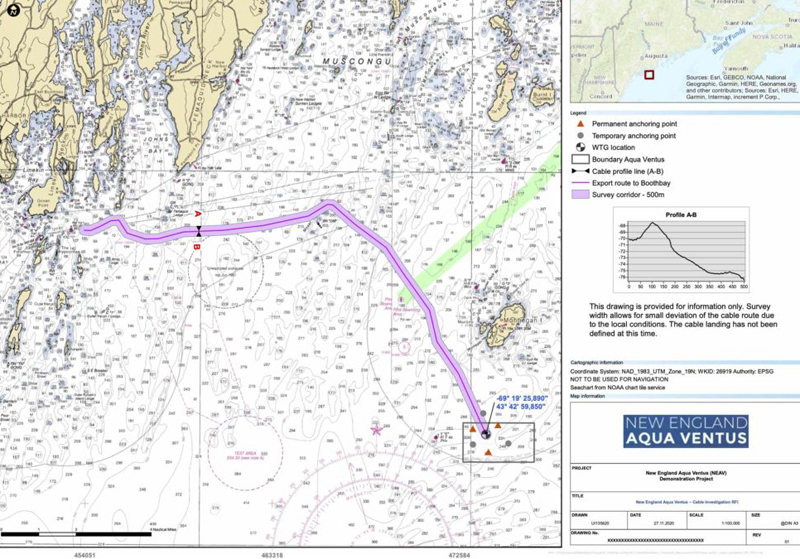 An underwater cable that will connect the New England Aqua Ventus I wind turbine off the coast of Monhegan Island to the mainland power grid will come ashore in the Boothbay region, developers said in a Zoom meeting Wednesday, Feb. 3.

A seabed survey to plot a route for the cable will start March 8 and run through April 4.

The survey will run west to east, starting in the nearshore waters of the Damariscotta River between South Bristol and Ocean Point, according to newenglandaquaventus.com, the project’s website.

A map on the site shows a proposed cable route from the turbine site, 2.5 miles south of Monhegan, to an as-yet-undetermined landing location on the Boothbay peninsula.

The route of the survey heads northwest from the turbine site for more than half of the route, then makes a hard left turn to head west toward Ocean Point.

Fishermen are advised to remove their gear from the path of the three survey vessels.

Fugro USA Marine is conducting the survey and says it will record any encounters with fishing gear.

“If gear becomes entangled in survey vessel or equipment, Fugro will contact Marine Patrol to notify them that gear is being taken aboard, and it will be turned over to Marine Patrol at the earliest possible opportunity,” a notice on the New England Aqua Ventus website says.

The notice also states that there is a compensation program in the event of lost gear.

A chart of the complete cable route will be sent to license holders in Zones D and E through the mail and daily updates will be issued via email, the notice says. Contact information for all three of the research vessels is listed on the website.

Representatives from the University of Maine and New England Aqua Ventus LLC, a joint venture between Mitsubishi Corp. subsidiary Diamond Offshore Wind and RWE Renewables, the second-largest offshore wind company in the world, attended the Zoom meeting hosted by the Monhegan Energy Task Force on Feb. 3.

New England Aqua Ventus LLC will lead construction, deployment, and operations for the single 10- to 12-megawatt wind turbine. The floating turbine is a demonstration project intended to evaluate the technology.

The University of Maine’s Advanced Structures and Composites Center, which has been developing offshore wind technology for the past decade, announced the $100 million partnership with the new entity last August. The program is also funded through $39.9 million in grant funds from the U.S. Department of Energy.

The center will handle design, engineering, and research and development for the project, and will monitor its operation.

Dustin McEachern, of Diamond Offshore Wind, said during the meeting that the cable will run about 22 miles through state waters and the single “state-of-the-art” wind turbine will produce enough electricity to power 5,000 homes in the Boothbay region.

McEachern said New England Aqua Ventus is working with private landowners and the towns of Boothbay and Boothbay Harbor, as well as the local fishing community, to modify and finalize the cable route and landing spot.

The developers plan to announce the landing site and begin applying for permits by the end of March 2021, give a notice to proceed for contractors in early 2022, start building the concrete foundation for the floating turbine the same year, erect the turbine in 2023, and then tow the assembled structure to its destination 2.5 miles south of Monhegan Island. 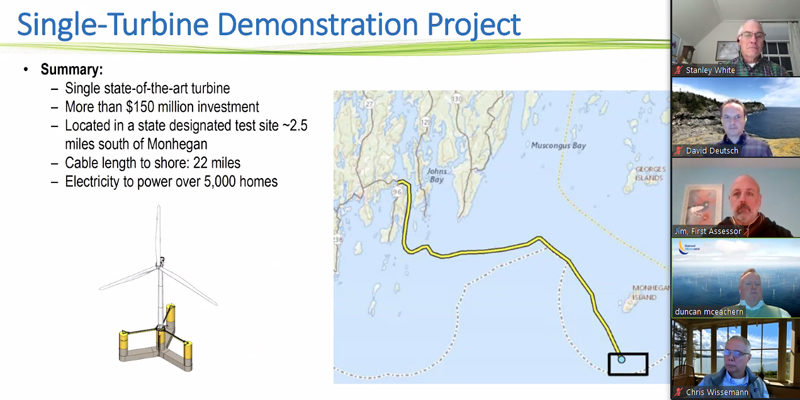 Dustin McEachern, of Diamond Offshore Wind, presents a map showing a possible route for the undersea cable from the New England Aqua Ventus I wind turbine off Monhegan to the Boothbay region during a Zoom meeting Feb. 3. (Screenshot)

The turbine will be mounted on a floating concrete hull held in place by three mooring lines anchored to the seabed.

Part of the permitting process involves a lengthy list of National Environmental Policy Act requirements. McEachern said outreach to federal agencies and initial tribal outreach will begin at the end of the month.

The route of the cable and where it will make land have been points of contention in mainland communities since the initiation of the project nearly a decade ago.

Andrew Fenniman, co-founder of Friends of Muscongus Bay, a group that has opposed the location of the project and proposed cable routes since 2014, asked whether a new public scoping period will take place as part of the National Environmental Policy Act process, since the plan has changed from including two floating wind turbines to one larger turbine.

The 10-MW turbine will be taller than the previously proposed dual turbines, standing at a height of 654.08 feet to the top of the longest blade. The hub, or center of the rotor blade, would stand 367.5 feet tall.

It was not clear during the meeting whether a new public scoping period would take place. However, in a Feb. 12 email to Fenniman, U.S. Department of Energy spokesperson Diana Heyder indicated that a public scoping meeting would take place by Zoom later this year. She said her department would invite people from communities that could be affected, including South Bristol, East Boothbay, and Boothbay.

“After the meeting there will be a two-week public scoping period during which participants will be invited to provide input on the scope of the (environmental assessment) ensuring their hopes and concerns will be heard,” Heyder wrote.

Heyder said there will be a public comment period after the draft environmental assessment is complete.

John Seiders, a South Bristol lobsterman who fishes in the Damariscotta River, voiced concern about the cable route disrupting and cutting off South Bristol from the fishery during a phone interview Feb. 9.

He said South Bristol fishermen are worried about the electromagnetic field from the cable pushing fish and lobster away in the area between Pemaquid Point and Ocean Point.

Dave Wilby, a spokesperson for New England Aqua Ventus, said by email on Tuesday, Feb. 16 that the cables are low voltage and there have been no documented disruptions to fisheries in Europe from electromagnetic fields where over 5,000 offshore wind turbines have been installed.

He said the cable will be encased in sheathing and buried 5-6 feet under the seabed. He said it would be similar to those that connect the Knox County island communities of Vinalhaven and North Haven to the mainland.

Wilby said the U.S. Bureau of Ocean Energy Management conducted three years of surveys and did not find any adverse effects where cables are installed in ocean settings.

“Review of the evidence to date does not indicate that (electromagnetic field) from undersea power cables negatively affects commercially and recreationally important fish species within the southern New England area,” Wilby quoted from the agency’s report.