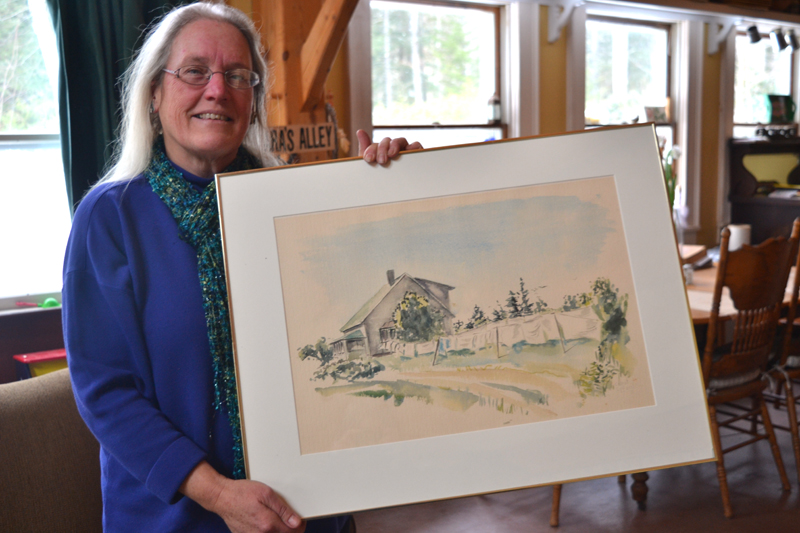 Julia Lane, daughter of the late Lincoln County sculptor Cabot Lyford, poses with one of her father’s watercolor paintings at her Round Pond home Jan. 23. (Christine LaPado-Breglia photo)

By all accounts, the late New Harbor sculptor Cabot Lyford was a formidable man, both in his tenacious approach to life and in his favored choice of medium – hard, unforgiving stone.

Lyford’s signature large sculptures – “My Mother the Wind,” a 7-ton granite sculpture that graces the Portsmouth, N.H. waterfront, and “Life Force,” a massive dolphin sculpture also of granite in Portland’s Old Port neighborhood – are a testament to Lyford’s strength, talent, and vision.

“For his large commissions, he had no agent. He promoted himself,” said Lyford’s daughter, Round Pond musician Julia Lane, in a recent interview at her home. “People helped him along the way, but he busted his butt.”

Lyford, who passed away Jan. 21, 2016 at the age of 90, was also a painter of watercolors, a fact not widely known until fairly recently, when Lane made a number of his paintings available to two art venues in southern Maine, the Ogunquit Museum of American Art and Rachel Walls Fine Art in Cape Elizabeth.

Currently, a multifaceted retrospective exhibit of Lyford’s work called “Cabot Lyford: War, Whales, Whimsy, Wings, Women, and Workings” is on display at Rachel Walls Fine Art. The multi-room show covers the lengthy period from the 1940s, when Lyford served in the U.S. Army in the Philippines, to 2015. It features a wide array of sculptures – human figures, whales, abstract pieces, and more in wood, stone, metal, and Plexiglas – as well as an assortment of Lyford’s watercolor paintings and sketched pieces.

Lane offered praise for Rachel Walls, who runs the eponymous gallery housing the Lyford show. Walls, along with Lane’s husband, Fred Gosbee, was instrumental in helping Lane sort through the profusion of art that her father left behind in his studio after his death.

Lane met Walls through her friend Charlie Ipcar, the son of the late iconic Maine artist Dahlov Ipcar, whose work is also currently on display at Rachel Walls Fine Art.

“She started looking at this stuff with the eye of a historian, an art historian, rather than a dealer,” said Lane of Walls. “She’s also very much about art education.”

For her part, Walls is a well-informed, enthusiastic promoter of all things Lyford. A tour of the Lyford exhibit with Walls as a guide yields much insight.

“Cabot’s watercolors hadn’t really been shown before,” said Walls during a recent interview at her gallery. “Last summer, a set of them was shown at the Ogunquit Museum (of American Art). It’s exciting to realize that there was this whole other medium that he worked in.”

As she worked her way through the gallery, Walls reached for a colorful framed piece called “Cebu Laundry,” created in the late 1940s using batiking crayon on a piece of cardboard when Lyford was stationed in the Philippines. “He was using the materials he had available,” Walls said.

Similarly, “Tenements,” a mixed media piece also from the late ’40s, was fashioned “on the back of a piece of Army tent,” she said.

Stopping before a dark-hued industrial-like watercolor from 1948 called “Power House – Ithaca River Gorge,” Walls pointed out “the influence of engineering” on the piece, referring to Lyford’s early engineering training at Cornell University before he went on to study art at Maine’s Skowhegan School of Painting and Sculpture.

Motioning to a couple of sketches of female nudes, Walls noted that they appear to be the basis for Lyford’s 1947 granite sculpture “Torso,” which is also on display at Rachel Walls Fine Art. The slightly twisted position of the torso in the sculpture (Lyford’s first, by the way) appears to be the same as in the drawings, “which is an unusual position for the torso,” said Walls.

“He is taking that engineering background to look at the structure of the human body,” she said.

In another room of the gallery, Walls took apart, piece by piece, Lyford’s metal mock-up for his large wood sculpture called “Flight of Geese,” which stands at Mount Sunapee Resort in New Hampshire, to show his meticulous approach in developing his larger pieces.

Moving to an aluminum-block sculpture, one among numerous smaller sculptures in the exhibit, Walls noted that in making the piece, Lyford was “redefining the way you use the material.” Rather than melt the aluminum as is customary, Lyford chose to “carve” it into pieces that fit together as a puzzle-like sculpture.

Walls noted admiringly that Lyford “is pushing the material to see ‘are we utilizing all the ways you can use these materials?’”

His use of laminated wood for certain sculptures served to “enhance the work in unusual ways,” Walls said. “Ms.,” a standing statue of a woman, is one such piece. The lamination is cleverly made use of in order to emphasize certain features of the figure.

Walls views Lyford’s body of work “as biography – it fills in the blanks of his life.”

Lyford’s Rachel Walls Fine Art exhibit features 75 sculptures and 50 paintings, said Lane. The show “is the big surprise for people that think they know Cabot Lyford,” she said. “He’s not a one-trick pony. They’re thinking granite. They’re thinking whales. And women … But there is a range – from the really abstract to the sensuous and warm wooden animals and figures.

“And then there are the paintings, which range from beautiful, gentle landscapes to crazy abstracts.”

“He was exploring a lot of inspirations – that’s what’s so wonderful about this show,” Lane said.

Contact Walls at 266-5411 or missrachelwalls@gmail.com to arrange a time to view the “Cabot Lyford: War, Whales, Whimsy, Wings, Women, and Workings” exhibit at Rachel Walls Fine Art, which is located at Fort Williams, 1000 Shore Road, Cape Elizabeth. The exhibit runs through Sunday, Feb. 24.

One can arrange a free guided tour of Lyford’s New Harbor studio by contacting Lane at julia@castlebay.net or 529-5438.