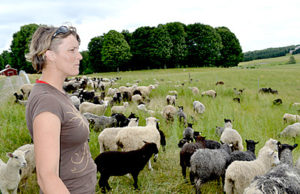 Laurel Banks looks on as her flock grazes on grass that is healthy and nutritious due to the Shepherd Craft Farm’s practice of rotational grazing. (Abigail Adams photo)

Drought drove Laurel Banks to leave her native land in Northern California in search of lush, green pastures to raise her flock of grass-fed Gotland sheep. Maine’s growing reputation as a haven for independent, small-scale farms directed her to Whitefield, where she and her husband Josh established Shepherds Craft Farm on Townhouse Road last year.

Across from the Sheepscot General Farm and Store and adjacent to Fuzzy Udder Creamery, Banks now raises her flock of about 300 sheep, the majority of which are Gotland sheep, a breed native to Sweden known for the flavor of its meat and the richness of its fiber. 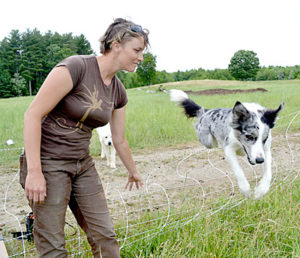 Laurel Banks’ border collie, Lil, jumps into the paddock where a flock of about 300 Gotland sheep were grazing on the Shepherds Craft Farm in Whitefield Tuesday, June 28. A Great Pyrenees, which guards the flock, looks on in the background. (Abigail Adams photo)

As Banks continues breeding Gotland sheep, her goal is to create a more pure-bred version of the animal; most Gotland sheep in the United States contain percentages of other breeds.

Through rotational grazing, Banks is not only raising healthy animals with sought-after meat, fleeces, pelts, and fiber, but is also preserving the health and sustainability of the land.

Banks inherited her love of sheep from her grandfather, who owned a couple of them. When Banks turned 18, she bought her first four sheep; it was her first step down the career path of shepherding.

Banks started shepherding with a different breed of sheep; however, through a friend in Oregon, Martin Dally, an expert in sheep insemination, Banks began her flock of Gotland sheep.

Banks is committed to the cultivation of healthy animals. Her flock is grass-fed, as opposed to grain-fed. The latter diet changes animals’ digestive systems and makes them susceptible to disease, she said.

Banks is also committed to sustainable agriculture, and practices rotational grazing for her flock, moving the flock to different areas of a pasture almost daily to enable grass to be restored to its full nutritional value.

With the drought turning California’s green fields brown, Banks began to search for a new home for her sheep. Laurel and Josh Banks searched for land in Maine due to its reputation as a haven for small farms and the proximity of family.

They landed in Whitefield, which about one year ago they made home to their flock of about 300 sheep, one of the largest flocks of Gotland sheep in the country, Laurel Banks said.

With the help of Lil, Banks’ border collie, the sheep are herded to different areas of the pasture to graze. The grass the sheep feed on remains lush, green, and nutritious due to the rotational grazing practices.

Two Great Pyrenees stay with the flock 24/7 to protect it from coyotes, eagles, and other predators.

This past breeding season, about 180 lambs were born, Banks said. Most of the males will go to “freezer camp,” or be butchered for their meat, when they grow to about 4-8 months, Banks said.

Banks is highly selective about the males she will choose to breed, she said, and only plans to keep five of the male lambs to raise. A local butcher handles the slaughter of the lambs, whose meat is “beyond organic” because they are grass-fed, Banks said.

“You can’t get too attached,” Banks said about the sheep, as some of her herd gathered around her and nuzzled her in the paddock, a fenced-off part of the pasture, where they were grazing. Gotland sheep are known for their sweet and friendly temperament, Banks said.

Even during Maine’s long winters, when the pasture is buried under snow, the flock continues to graze on hay.

All of the sheep are shorn; the lush, soft fiber Gotland sheep are known for is sold as whole pelts, fleece for spinning and weaving, and finished products of yarn, hats, wraps, and scarves. The Shepherds Craft Farm fills orders for its products from across the country, Banks said.

Banks hopes to expand the farm’s products to include milk and cheese in the future, she said. Shepherds Craft Farm is not only agriculturally and environmentally sustainable, it is also economically self-sustainable, she said.

The work of a shepherd is labor-intensive, but it is also “satisfying, exasperating, and amazing,” Banks said.

For more information about Shepherds Craft Farm, go to shepherdscraftfarm.com.