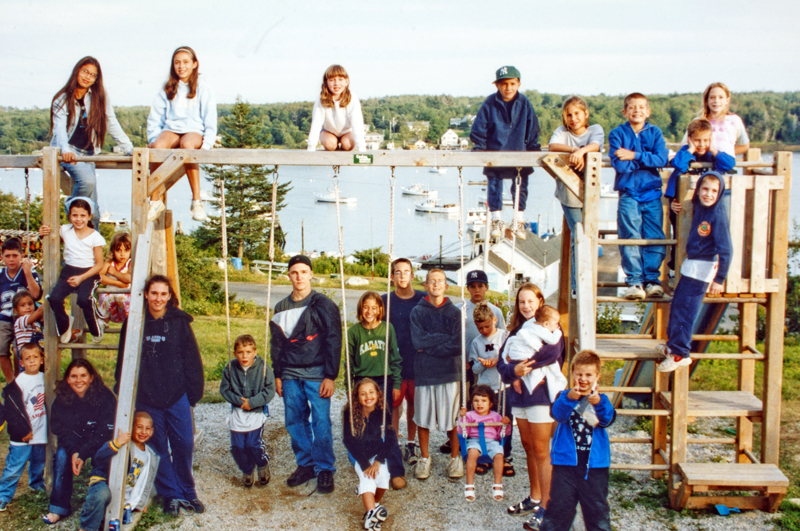 Campers pose for a group photo on a swingset at the Pemaquid Fishermen’s Coop during the first 9/11 Family Camp at Camp Kieve in 2002. (Photo courtesy Kieve Wavus Education)

Nineteen years ago a bus from New York City arrived at Camp Kieve in Nobleboro carrying a group of people who suffered an unimaginable trauma. That bus held parents who lost children, wives who lost husbands, children who lost parents, whole families still aching with shock and grief as they approached the first anniversary the Sept. 11, 2001, terrorist attack on the World Trade Center that tore their lives apart.

A second bus arrived. More flew in from Virginia and Washington D.C. or drove up in cars or campers. That August in 2002 more than 100 people whose lives had been stained by the smoke that spread from a pair of burning towers took a breath of pine-scented air, felt the balm of cool water,  and found in Maine, a family.

In 2021, many of them returned, assembled again on the shores of Damariscotta Lake for a few critical days of respite and reconnection.

“The moon and the ducks and the lake. The sweetness of what’s around us here is very special, very healing, peaceful. The way you wish it were all the time,” said Nancy Kennedy of Camp Kieve.

Kennedy, wife of the camp’s former director and mother of its current director, has been an integral part of Kieve Wavus Education for most of her life. She remembers the first bus filled with mothers and grandmothers and so many children. She remembers making people feel at home even though, she said, “It was still very raw. And it still is. The scars are always there. It’s all right there behind their eyes.”

Reflecting on that first year when so many of the campers were still strangers, Kennedy said, “Here came all these tender people knowing nothing of Kieve, nothing of Nobleboro. They had been through so much. And here there was only kindness, only love. And 20 years later it’s still the same.”

Mark Robinson, a pastor and board member, has led services at the outdoor chapel during the 9/11 Family Camp for most of the last 19 years, including in 2002 and 2021.

He said, “The camp and the engagement with the 9/11 surviving family members is a model for healing communities, for reconciliation, and the evolution of new family relationships.”

Robinson helped land the first big chunk of financing for the camp through his connections with Safe Horizon, a national victim assistance organization. He said that the “coordination from the hearts and souls, from the people of Maine encouraged by the people of Kieve Wavus was incredible. The outpouring from the Maine Lobstermen’s Association, local firefighters, local police, local schools – it was an extraordinary gift to all of us involved.”

Jack Montgomery, an attorney and skilled amateur photographer, had a daughter at New York University who lived in a dorm two miles from the World Trade Center. She called him as the planes were hitting the tower.

Montgomery’s daughter left Manhattan because the smoke got so bad, and when he drove her back, he stopped at the small firehouse across the street from the dorms. Montgomery had done a series of photographs of Holocaust survivors in Maine and he took his portfolio to Ladder Co. 3 FDNY and told them he wanted to help. He made a series of portraits of the firefighters who survived – half of them had died, up on the 14th floor. They had refused to leave while there were still people in need of rescue.

An exhibition of the photographs at the Portland Museum of Art raised the first money that the widows and orphans of Ladder Co. 3 received.

Montgomery started a nonprofit, and through his funding efforts became connected with Henry Kennedy and Camp Kieve.

During 9/11 Family Camp, Campers fill their days with activities from kayaking to swimming or fishing, from crafts to cooking, but it was often Robinson’s services where they would address their grief.

“We tend to believe that we need to provide answers or a response to the pain,” Robinson said. “Being present for those who are struggling, with a shoulder to lean on, someone to walk with, someone to talk with is enough.”

In 2001, Maria Zeitlin was married to a lieutenant for Ladder Co. 3 FDNY in the East Village in Manhattan. The World Trade Center was in its direct response area and because of the timing of the event both the day and evening shift were on hand to respond to the attack.

Zeitlin remembers the chaos and anxiety, the days and weeks and months that followed, digging through the piles of debris and ash, attending funerals. Memorial services were held for each firefighter lost and the services were repeated when the bodies were found.

“There was so much love and outpouring that year,” Zeitlin said. “From so many places – come to Sweden, come to Germany. The world was reaching out to us. Then word came of this camp up in Maine. Instantly I thought that would be just perfect for families, not even realizing that it was going to be this really pivotal point in my life for grief recovery.”

The first anniversary was looming over the families and in those early days the anniversary meant “putting on your black suit and walking down into the pit …You just stand there for four hours listening to the reading of name after name after name.”

The camp was a reprieve from the attention, its timing perfect at the end of August. “Each year after that it was the thing that gave us the strength to face that next anniversary,” Zeitlin said.

“When we left the first year we cried. If you can picture someone wrapping their arms around a tree and hugging it and saying, ‘No. I don’t want to go. You can’t make me leave.’  But in 2021 there was the knowledge that we stayed strong for these 20 years, and that we would see each other again.”

Bridgid MacDonald was seven years old when she lost her father, Joseph in the attacks on the World Trade Center. Joseph MacDonald was one of the 658 employees of Cantor Fitzgerald who died that day.

The next year her family received a video in the mail from Camp Kieve, and her mother showed Bridgid and her sister scenes of kids having fun, participating in the activities that Camp Kieve offers.

That first year was so challenging. Her mother didn’t really want to go, but she put on a happy face for her daughters, MacDonald said.

MacDonald formed some of her closest friendships at Kieve. “It was fun as a kid. It’s still fun as an adult,” she said.

She remembers trying to get to the top of the rope course. “I was terrified but over the years I kept pushing,” she said. “I really credit Kieve with giving me the opportunity to push myself.”

“I was so afraid of everything … because of what happened to my family. It was so hard every year to relive that day,” she said. “I remember being in so much pain as a kid wondering if when I was older, it was still going to hurt as much, wondering am I going to be OK?”

Jeff Stratton was an active duty Navy SEAL working in the Pentagon on the day the planes hit. He said they lost about 70 people inside the building and he knew everyone who died. Some were close friends.

After the attack, Stratton was assigned as a buffer between the casualty assistance officers and the families who lost members. Three of those families insisted Stratton come with them to Maine, to Camp Kieve.

“The first year, there were young kids and infants,” Stratton said. “Fast forward to 2021 and those children have grown up.”

“This last time it was magical,” he said of the activities, camaraderie, food and drink. Stratton saw his role as more of a volunteer, a helper.

The events of Sept. 11, 2001 shaped the lives of all the people who experienced loss and trauma that day, but Stratton said that their experiences at Camp Kieve shaped them, too.

“It’s a little garden of Eden every August. It helps people ease the pain of what happened 20 years ago.”

“By the end of (that first week) we were a family and we knew it.”