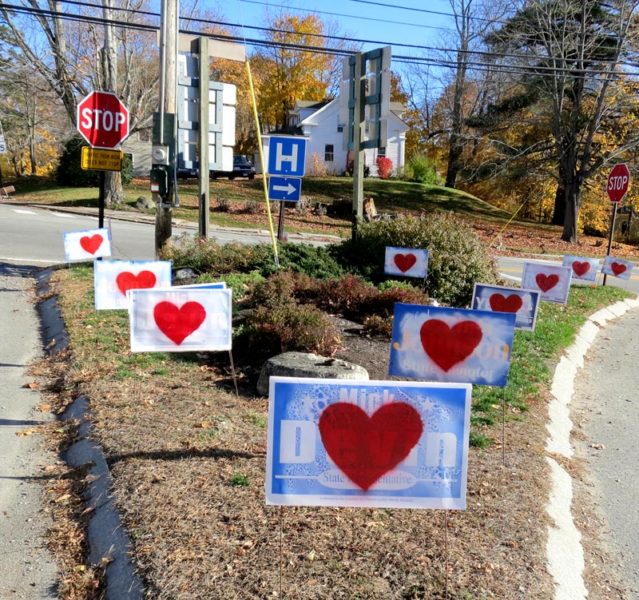 A few dozen campaign signs were removed from their original locations, painted over with hearts, and placed in the area around a busy Newcastle intersection.

“My guess is somebody was really wanting to make a statement about moving forward, finding a way beyond the hate and the attacks, and spreading a little love, but I don’t know who did it, so I don’t know the reason behind it,” said state Sen. Chris Johnson.

Johnson, D-Somerville, received a call about the signs from Newcastle Town Clerk Dawn Burns the morning of Thursday, Nov. 10, and drove down to pick them up.

There were about 40-45 signs. Many were for Johnson and Rep. Mick Devin, D-Newcastle. Others were for Democratic U.S. Rep. Chellie Pingree and her Republican challenger, Mark Holbrook; House District 87 candidate Wendy Ross, D-Wiscasset; incoming state Sen. Dana Dow, R-Waldoboro; and the Yes on 3 and Yes on 4 campaigns. 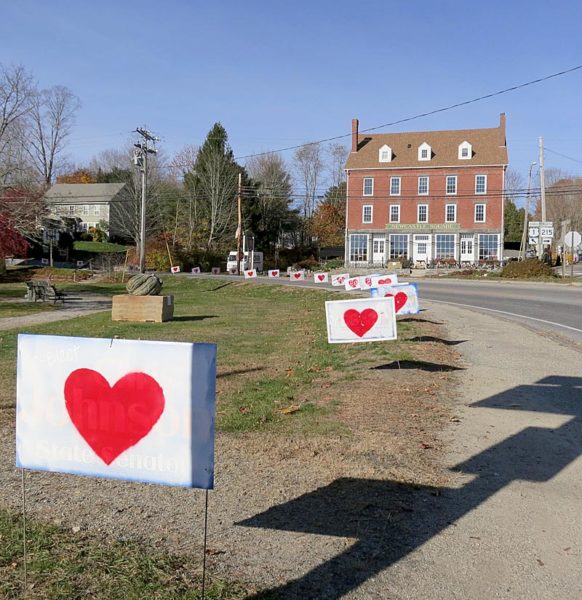 The signs were painted white on one or both sides before the red hearts were added. The signs were arranged neatly around the intersection of Academy Hill Road, Main Street, and Mills Road. There were signs in Veterans Memorial Park, on the traffic island in the middle of the intersection, and along the sidewalk in front of the Newcastle Publick House.

Although the candidates will not be able to reuse the signs, Johnson was not bothered and appreciated the sentiment behind the signs.

“We do have to find ways to get a better understanding of each other and bring people together in this state and in this country,” he said.

Johnson will leave office at the end of the year after an unsuccessful bid for a fourth consecutive term representing most of Lincoln County in the Maine Senate.

Despite the positive message of the hearts, it is illegal to paint over a campaign sign. Under Maine law, it is a civil violation to take, deface, or disturb a campaign sign. The maximum fine is $250.

Candidates will have to remove all their signs soon. Signs can be up a maximum of six weeks under Maine law.