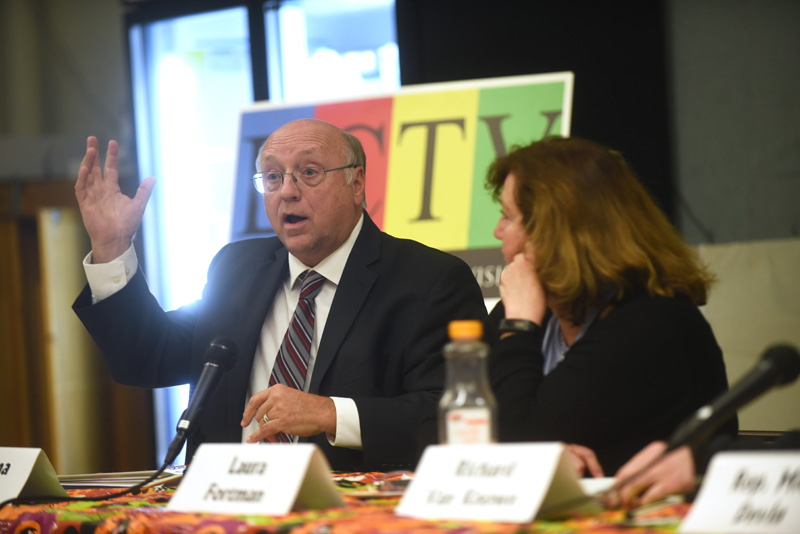 Candidates for county commissioner, district attorney, and local House and Senate seats discussed a variety of local and state issues during a forum at Great Salt Bay Community School in Damariscotta on Thursday, Oct. 18.

The Lincoln County News hosted the forum, the last in a series of three.

J.W. Oliver, editor of The Lincoln County News, moderated the forum. Oliver and the crowd asked the candidates questions. About 100 people filled the cafeteria of the school.

The candidates for district attorney fielded questions about their stance on the use of restorative justice. Prosecutorial District 6 consists of Knox, Lincoln, Sagadahoc, and Waldo counties.

Community-based restorative justice holds a nonviolent offender accountable by requiring them to meet with the victim and hear firsthand the harm they caused, as well as to pay restitution and perform community service, District Attorney Jonathan Liberman said.

“I believe that is the only cost-effective way to ensure that victims get justice in our community. It’s the only way to ensure that our tax burden doesn’t go through the roof,” she said during her opening remarks. “It is unsustainable to continue locking folks up for nonviolent misdemeanor offenses.

“Also, when we are locking folks up because of opioid addiction, we are fueling the fires of addiction. I want to make sure people are in treatment in the community, instead of in jail at the taxpayer’s expense.”

“It’s an opportunity for some true accountability that is oftentimes missing in our criminal justice system,” he said.

Jane Langdon-Gray, an attorney and owner of Langdon-Gray Law LLC in Newcastle, asked Liberman if he would offer more opportunities for restorative justice in the future if re-elected.

“I’ve been a defense attorney in District 6 for a year now. I’ve had multiple clients with nonviolent misdemeanors and have not once had the opportunity to use community-based restorative justice,” she said.

Liberman said decisions about her cases would depend on what her client had done and her client’s criminal history.

Oliver asked the Senate and House candidates whether they support Question 1, a citizen-initiated referendum that will appear on the ballot Nov. 6.

The question reads as follows: “Do you want to create the Universal Home Care Program to provide home-based assistance to people with disabilities and senior citizens, regardless of income, funded by a new 3.8 percent tax on individuals and families with Maine wage and adjusted gross income above the amount subject to Social Security taxes, which is $128,500 in 2018?”

None of the candidates support the initiative.

“It is probably one of the worst worded referendums I’ve ever seen,” said Sen. Dana Dow, R-Waldoboro. “To me, this is socialized mafia.”

“I support the intent of Question 1,” said Laura Fortman, D-Nobleboro, the challenger in Senate District 13. “However, I have concerns about both the funding mechanism and the government structure, and because of that I will not be supporting Question 1.”

“It’s a very complex problem,” said Rep. Mick Devin, D-Newcastle. “Referendum 1 doesn’t even start to address it, and as Dana said, it is incredibly poorly written.”

Richard Van Knowe, R-Bristol, the challenger in House District 90, also said he does not support Question 1 and does not support “third-party payer” systems in general. Instead, he advocates for medical savings accounts.

“If you went to a system where average health care was paid for out of pocket, people wouldn’t be burdened with expensive insurance payments,” he said.

Senate District 13 consists of Lincoln County except Dresden, as well as Washington and Windsor.

Bristol resident Don Means asked the legislative candidates for their thoughts on citizen’s initiatives in general.

All the candidates said they support the idea of citizen’s initiatives, but expressed varying concerns about the process, such as the out-of-state money behind certain campaigns and where signatures are collected.

“I believe that (referendum results are) the will of the people, and that legislators have a responsibility to follow that,” Fortman said. “However, I also think that we are seeing a number of issues brought to referendum that are complex because people are frustrated, because the Legislature is not addressing them.”

“It used to be that this process was for us Maine people,” Dow said. “Now it’s been hijacked by out-of-state interests, who come with a lot of money. They pay for out-of-state people to come in and gather signatures on poorly worded referendums. If we’re going to gather signatures, we need to gather them in equal amounts in both congressional districts.”

“The process has been hijacked,” Devin said. “We somehow have to get a handle on that out-of-state money coming into Maine.”

“Another issue that we need to understand here is that in the last eight years, we have seen more vetoes than in the last century,” he said.

Van Knowe said that while he supports the initiative process, it needs changes to ensure the resulting laws will be constitutional before the questions go on the ballot.

Toward the end of the evening, Oliver asked the candidates for county commissioner what their top priority would be if elected.

Blodgett said he would like to focus on the services the county provides to municipalities and residents.

“My top priority is all about the money,” he said. “How much money do you want to spend for what services you get? You know, we’re all property taxpayers, and that’s where the county gets its money, is off your property tax.”

Damariscotta resident Sandi Day asked the legislative candidates what they plan to do to promote a friendlier business community.

Dow said he believes there needs to be tax reform, because if taxes are lowered, businesses will be more likely to open in the state. He also said business regulations should be looked at in order to make it easier to start a business.

Fortman spoke about the lack of workforce in the state.

“We need to recruit, retain, and train a skilled workforce if the economy is going to grow,” she said.

Van Knowe said he agreed with both Dow and Fortman. He said laws and regulations regarding young workers should be examined, such as the requirement for teenagers under the age of 16 to have a work permit signed by the school superintendent.

Devin said more access to health care will give people a higher quality of life and create jobs.

Lincoln County Television filmed the forum. LCTV is channel 7 on Tidewater and channel 1301 on Spectrum. To watch online, go to lctv.org.