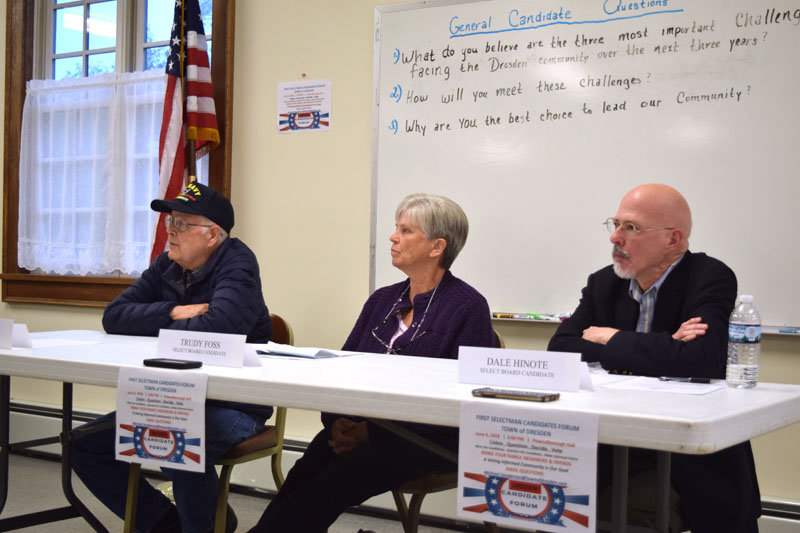 The candidates for first selectman in Dresden answer questions during a forum at Pownalborough Hall on Monday, June 4. From left: John Ottum, Trudy Foss, and Dale Hinote. (Jessica Clifford photo)

Forty-five residents attended a candidates forum Monday, June 4 to ask the three candidates for first selectman in Dresden about their vision for the town.

Residents will elect a first selectman Tuesday, June 12. The polls will be open at Pownalborough Hall from 8 a.m. to 8 p.m.

The moderator was resident Gary Blau. The forum’s aim was to increase community involvement, Blau said. Dresden has more than 1,300 registered voters, but only 284 voted in the 2017 municipal election, he said.

The order of participation, based on a drawing prior to the forum, was Ottum first, Foss second, and Hinote third.

The forum began with each candidate introducing him or herself, as well as his or her vision and platform.

Ottum moved to Dresden about 38 years ago and served as selectman for 17 years from the 1980s to the 2000s. He graduated from Falmouth High School and attended the University of Southern Maine, graduating with an associate degree in business administration.

“Based on my experience, I think I would make a good first selectman,” he said.

Foss has been a Dresden resident for 34 years and worked for the town for 30 years. She is a graduate of Brunswick High School and is a certified water operator and a certified assessor.

She said she would like to see Dresden remain mostly rural, but she is open to bringing some businesses into the town to help the tax base.

“My vision for Dresden is to see the community come together and work together to see what they want for their vision of Dresden,” she said.

The candidates then answered three questions: “What are the three most important challenges facing the Dresden community over the next three years? How will you meet these challenges? Why are you the best choice to lead the community?”

Most of the candidates focused on the first question.

The three most important challenges, according to Ottum, are keeping taxes down, keeping residents informed, and renovating the old town hall.

Ottum also wants to establish a veterans memorial, since Dresden is one of the only surrounding towns not to have one.

Foss’ three priorities are making a more efficient and productive town office, deciding what to do with rangeways, and having more people involved in the education budget.

As the former administrative assistant for Dresden, she said, the biggest complaint from people going to the town office is not being able to complete everything they came in to do.

Hinote emphasized the need for a balanced community through a reasonable taxation system and economic growth, and the need for more involvement in the schools and fire department.

He suggested that more residents become members of the Dresden Fire Association.

About twenty-six people asked questions or spoke during the residents’ questions period of the forum. A few issues – water, the fire department, power outages, recreation fund spending, and the need for new businesses in town – dominated the discussion.

Instead of asking questions, many residents spoke their opinions, causing some in attendance to leave.

Resident Nancy Cote asked if any of the candidates have a plan to entice new businesses to town to help with the tax base. 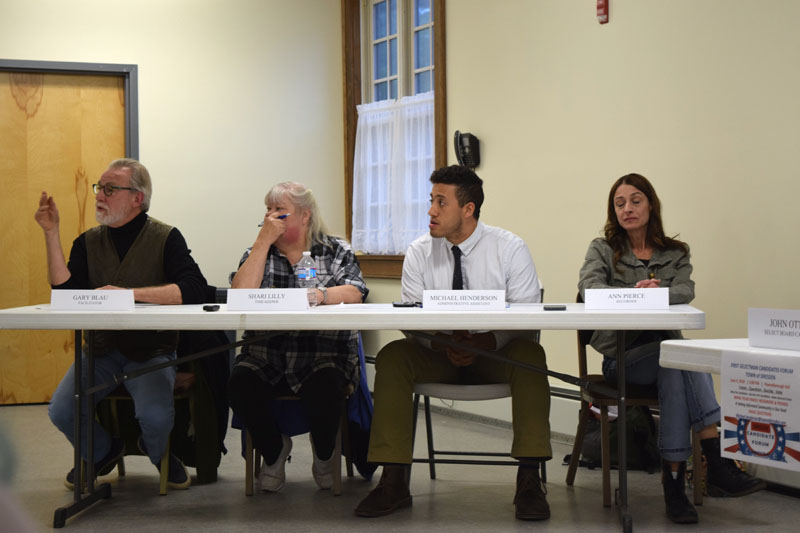 Ottum said he wants to form a committee of people with business and communications backgrounds to develop ways for businesses to come to Dresden. However, he said this would need town approval.

Foss said she does not have any plans now to bring businesses to Dresden.

“I said that I would like to see a couple businesses come to town, but you have to go out there and look for them because they don’t look for Dresden,” she said.

Foss said they have tried to entice businesses to come before, and Ottum jumped in, saying “we are not very high on the list” for new businesses.

Hinote said that to attract more businesses, he wants to work on the frequency and duration of power outages.

“I propose to work with our legislators to get some remedies from CMP,” he said in an email.

For now, he wants to see Dresden “become a resort/vacation destination,” which, he said, it was in the 20th century.

Richard Hughes, another resident, asked how each candidate would want the recreation fund to be spent. These funds come from the cable provider Spectrum, which pays the town a percentage of revenue from cable subscriptions for the right to operate there.

Dresden receives an average of $6,000-7,000 a year. Hughes thought there had been wasteful spending in the past for unused recreational equipment, citing a pickleball court and boat ramp.

Ottum wants to use the funds to purchase an electronic sign to feature dates and times for town meetings. He also wants to continue using funds for annual events, such as Summer Fest.

Foss said she would be conservative with the recreation fund money. She said she was not completely in favor of the installation of the pickleball court, but there was a lot of push to get it.

Hinote said the recreation fund money is just sitting there and if the town can purchase anything recreational that would build a sense of community, he would see it as important.

Ryan LaRochelle, another resident, asked about how each candidate would view their role as a selectman, whether they would rely on the people’s ideas or become leaders in the community.

Ottum said he would be interested in following what the people want.

Foss said the selectmen “have to work together and they are supposed to listen to what the people want.”

She thinks there should be more discussion between the residents and the select board.

“Part of the reason I am running is because a lot of things aren’t discussed the way they are supposed to,” she said.

Other town issues residents expressed concern about were Dresden’s water being used in neighboring towns, the need to contact CMP about power outages, and the possibility of full-time employees at the town office.

The question on the ballot will state: Do you favor approving the RSU 2 budget for the upcoming school year that was adopted at the RSU budget meeting?