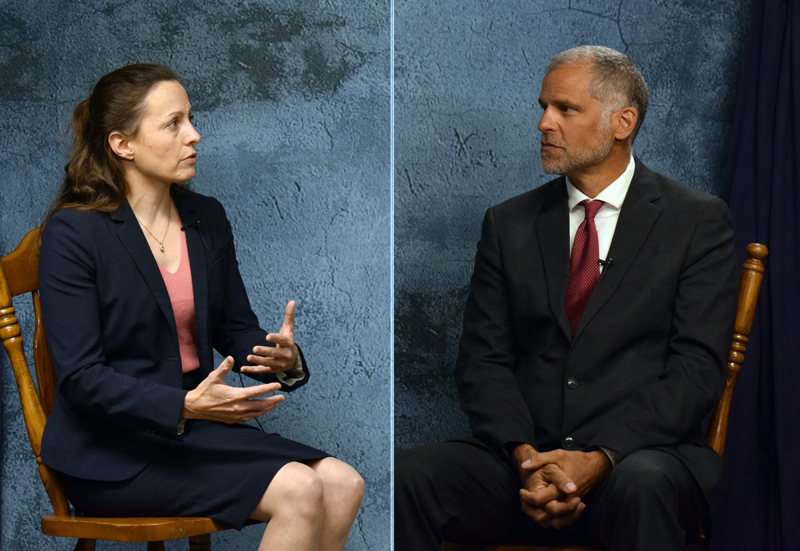 The two candidates for Lincoln County Judge of Probate will explain their priorities and qualifications for the position in a forum set to air on Lincoln County Television at 8 p.m., Tuesday, Oct. 6.

Probate courts have jurisdiction over such matters as estates, guardianships, adoptions, and name changes.

Avantaggio runs his own law firm in Newcastle. He was elected judge of probate in 2016 and is serving his first four-year term.

Burbank practices law at Berry & Burbank in Boothbay, a practice she started with Tom Berry, who was Lincoln County’s probate judge from 1988-2016.

The forum will be the seventh of nine to air. The Lincoln County News is hosting the forums in partnership with LCTV. J.W. Oliver, editor of the LCN, moderates the forums.

Burbank said she sees the opportunity to serve as judge of probate as a chance to expand her community service and she hopes to bring more efficiency to the process.

“There are some things in the probate court that I hope I could improve upon and change if elected,” Burbank said.

The majority of the judge’s work concerns adult guardianships, which involve people who cannot take care of themselves, and juvenile guardianships, Avantaggio said.

“If a parent hasn’t designated who a guardian is to be, somebody needs to step up and do that, so often it’s a grandparent or an aunt. Those are most of the contested hearings that we have. Those all need to be heard and a certain amount of evidence presented,” Avantaggio said.

He said that if an individual dies without a will, or someone wants to change their name or adopt a child, those matters also come before the probate court.

Avantaggio said the hardest cases he has had to deal with are those that involve adults who clearly need a guardian, but do not want one.

“But taking away somebody’s freedoms when they haven’t done anything to deserve that, they don’t want that taken away, they’re insistent that they can take care of themselves, they just clearly cannot, is much more difficult,” Avantaggio said.

“I think the most difficult thing is to be the person who is able to listen to the entire story that a person, either a child or an adult, is telling you. And I feel that I’m very practiced at that,” Burbank said.

Both candidates then discussed their qualifications for the position while also acknowledging their opponent’s fitness for the job.

“Meegan and I were in court on the same case this morning; we were in court against each other last week. She shows up to court prepared. She knows what she’s doing. If she doesn’t know it, she’ll go and learn it,” Avantaggio said.

Burbank said she is a hard worker and emphasized that she is not a member of any political party.

“I don’t consider Will, in any way, an enemy of mine. We work very well together and I appreciate all his work as a probate judge,” Burbank said.

The forum will air on LCTV — Channel 7 — and be available at lctv.org.