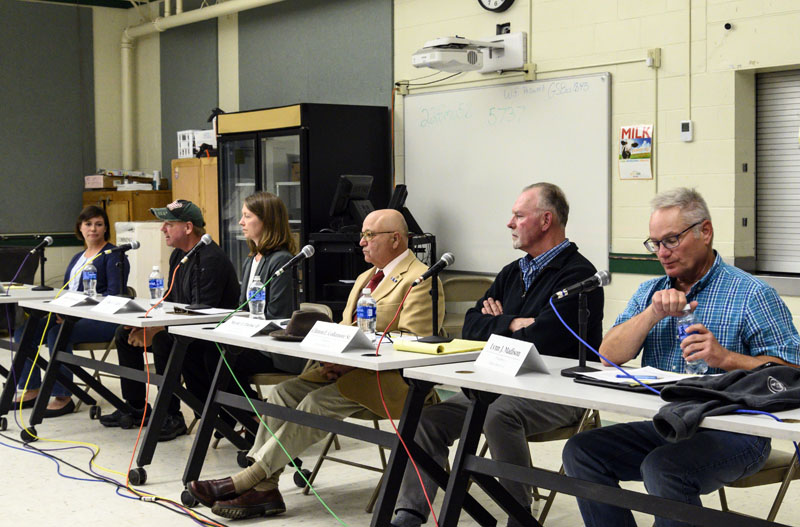 Passions ran high during a discussion about challenges facing the lobster industry at the fourth and final of The Lincoln County News’ candidates forums, held at Great Salt Bay Community School in Damariscotta on Thursday, Oct. 13.

The forum was attended by nearly 50 people and featured candidates for Senate District 13 and House Districts 45 and 46.

Cameron D. Reny, D-Bristol, and Abden Simmons, R-Waldoboro, are the candidates for Senate District 13, which consists of Lincoln County except Dresden, as well as Washington and Windsor.

During the 90-minute session, candidates were asked what they were hearing from voters and how they would work on those issues if elected. Candidates also discussed what the Legislature can do to address Maine’s affordable housing needs, support the lobster industry, and help support Maine’s small and micro businesses.

Maia Zewert, acting editor for LCN, asked questions and each candidate had two minutes to provide an answer. Each candidate was also given two minutes each for an opening and closing statement.

All six candidates at the forum agreed that the lobster industry was under attack by new rules issued by the National Oceanic and Atmospheric Administration that are designed to protect the North Atlantic right whale. They all passionately agreed that there seems to be no rationale or scientific evidence for the new restrictions and they need to be fought at all levels.

The lobster industry was a topical thread that ran through the entire forum, but candidates really dissected the issue when asked directly: “What steps do you recommend the Legislature take to support one of Maine’s traditional and crucial industries?”

Crafts noted that she serves on the Marine Resources Committee and is proud to have helped fund the legal defense fund for the lobster industry’s fight against the expensive and burdensome federal regulations.

In September, a federal judge struck down a challenge by the lobster industry to block the rules, which argued that the National Marine Fisheries Service, an agency within the National Oceanic and Atmospheric Administration, committed “scientific errors.” The lawsuit argued this, in part, because Maine lobstermen say their gear hasn’t been involved in a right whale entanglement in nearly two decades.

“The bigger conversation has to be focused on corporate responsibility, because ship strikes are a much bigger issue for whales’ survivability and nobody wants to take on large corporate entities,” Crafts said.

The plan released by the National Oceanic and Atmospheric Administration includes a closure of over 950 square miles in Lobster Management Area 1 to traditional lobstering from October through January; requirement of more traps per buoy line to reduce the number of vertical lines; more color markings on lobster buoys; and the addition of a weak rope link that will allow a right whale to break free if entangled. The gear modifications went into effect May 1, 2022, which is the start of the American lobster and Jonah crab fishing season.

Crafts noted that the lobster industry have been environmental stewards throughout the years and have always complied with regulations from the federal government.

Simmons said that Canadian lobster gear and ship strikes are a bigger threat to the right whale and he believes the industry is being unfairly targeted.

“They’re doing everything they can possibly do to kill us off,” Simmons said.

Reny also noted that there has never been a documented North Atlantic right whale death attributed to Maine lobster gear and sees no basis for the tighter regulations.

“Lobster is quintessential Maine,” Reny said. “It is not just a job; it is a way-of-life for so many people.”

Collamore, a lobsterman since 1968, was itching to talk about the lobster industry all evening, seeing that as his main priority. He compared the price of a lobster license when he first started, $38, with the approximate cost of one now, $1,400. He showed a new link part now required for lobster traps that is supposed to break away more easily to prevent right whale entanglements.

“It goes in every one of my traps and cost $52 to put that in my trap,” Collamore said. “The old existing rope has to come out because you can’t splice into these.”

Madison said the state Legislature has done essentially all it can do by supporting the lobstermen’s legal defense fund. He said government needs to get out of the way and let businesses be, another theme that ran throughout the forum.

Madison also spoke against government interference in our economy. He said that the federal government needs to stop “printing money” and issuing “handouts” and the “massive spending spree” at the state level needs to be stopped in order to combat inflation.

Madison said that most voters he is talking to are worried about inflation and how they are going to buy food and heating oil this winter. He said he has heard firsthand from clients he works with through the Maine Commission on Indigent Legal Services.

“Those people are poor and they’re getting poorer, significantly poorer,” Madison said.

Fellow Republicans Parise and Simmons both said separately that they would also like to see fewer regulations and less interference by the government in small business.

“The government needs to stay out of our pockets, period,” Simmons said. “Stop regulating us to the point where we can’t afford to go to work.”

Parise touted former Gov. Paul LePage’s idea to cap the heating oil price at where it was last winter, with the state government picking up the difference. He and the other five candidates all said they heard from voters worried about heating oil prices and the lack of affordable housing in the area.

Simmons noted that the Waldoboro Select Board, of which he has been a member for eight years, is looking at ways to help people pay for heating oil this winter.

“At the state level, we have to put pressure on the federal government to straighten this out,” he said. “Because if not, we’re going to be in trouble.”

Crafts said the Legislature provided an estimated $8 million to the Maine Low Income Home Energy Assistance Program, but that much more is needed.

“We have a $600 million budget surplus and we need to use our state funds well,” Crafts said. “We need to make sure people have heat and have their basic needs covered.”

All three of the Republican candidates favored less government involvement in small businesses, while Reny and Crafts both said there is room for the government to help the economy.

Crafts voiced her support for career and technical education, saying that this can help with the worker shortage in Maine. She said she is proud of the Legislature’s investment in providing two years of free community college for Mainers.

“This is opening doors for a future that will provide ready workers for small businesses,” Crafts said.

Collamore said that small businesses need help, but did not provide details on how the Legislature can do this.

“They are the backbone of Maine,” Collamore said of small businesses.

He said he wants to keep the federal government from interfering with businesses and keep it “out of the water,” a reference to the challenges facing the lobster industry.

On the topic of affordable housing, Reny tied it to the labor shortage, saying that businesses cannot find workers because the workers can’t find an affordable place to live.

“I’m really tired of seeing working families ending up homeless or having to move well out of their district and far away from their support systems,” Reny said.

She voiced support for L.D. 2003, “An Act To Implement the Recommendations of the Commission To Increase Housing Opportunities in Maine by Studying Zoning and Land Use Restrictions,” which was passed by the Legislature earlier this year.

The bill allows Maine property owners to build accessory dwelling units in residential areas and up to two units on a lot zoned for single-family housing, according to a press release. For larger communities with designated “growth areas,” up to four units could be built. All local building rules still have to be observed.

Collamore said he knows that a lot of young people can’t get a home because prices are up. He suggested the Legislature work with towns on incentives to use existing buildings to convert into housing.

Madison said the Legislature should use surplus funds to begin fixing the housing problem, especially for the elderly.

Simmons suggested using timber harvested from public lands to build housing and stressed that getting costs down is key to alleviating the multiple pressures Mainers are contending with.

“We need to get the cost of everything down,” Simmons said.

The forum was recorded and can be viewed online at The Lincoln County News’ Facebook page.