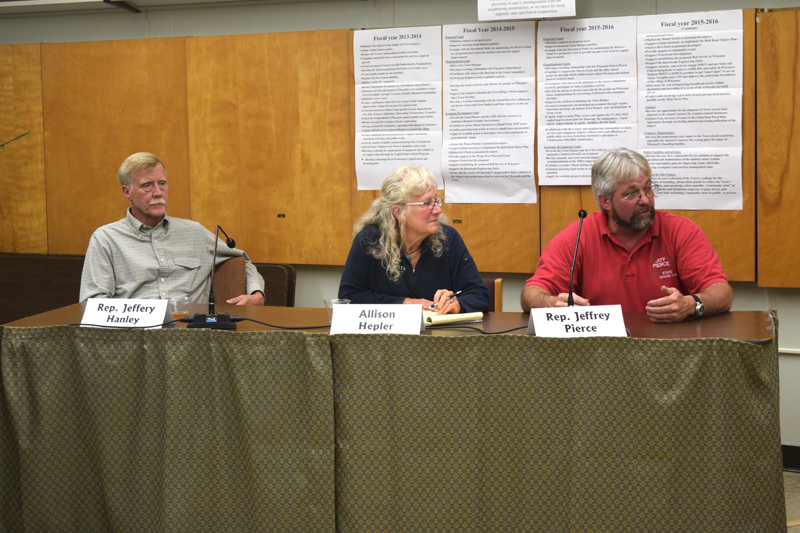 Seven candidates to represent Lincoln County towns in the Legislature talked about growing the state’s economy and the minimum wage during a candidates forum in Wiscasset on Thursday, Oct. 4.

The Lincoln County News hosted the forum, the first in a series of three.

The forum drew a large crowd, with standing room only at the Wiscasset municipal building.

J.W. Oliver, editor of The Lincoln County News, moderated the forum. Oliver and the crowd asked the candidates questions.

Early in the night, Wiscasset resident Joe Grant directed a question to House District 89 challenger Holly Stover, D-Boothbay, about how the state should continue its economic progress.

The state has “lost some opportunities over the years” when corporations have expressed interest in the state, but “didn’t get certain tax breaks,” Stover said. “They moved to another state that gave them a better offer.”

To keep families and their children in Maine, the state needs to improve its broadband infrastructure to attract more businesses, and it needs to help municipalities lower “excessive” property taxes, she said.

In response to the same question, most candidates expressed support for incentives to bring companies to the state, though strategies varied. Others said the answer is tied to education.

“We need to open the doors. We’re not opening the doors if we tax them,” she said. “We’ve got to lower them to keep people here.”

Hawke said the Legislature should work to lower energy costs too, because “three or four of the big businesses that have come and talked to Maine, they say, ‘We can’t afford your energy costs.’”

“In the state of Maine, we are not allowed to purchase energy from any producer that produces something over 100 megawatts,” he said. “So you are forced to buy artificially high-priced energy.”

The best way to encourage companies to come to Maine would be to eliminate the income tax, Hanley said.

Hanley’s challenger, Jason Putnam, D-Wiscasset, suggested that the state needs to stress the importance of prekindergarten and make it easier for students to go to college.

“It will attract companies to move here because they will have a ready, well-informed, progressively minded workforce,” Putnam said.

Hepler thinks that to improve the local economy, there needs to be more of a focus on vocational programs in public schools.

She agreed energy costs in the area are high. The state should become more welcoming to renewable energy, such as solar and wind, because the industry offers good-paying jobs and could help lower energy costs over time, she said.

Hepler said the state needs “investment in infrastructure, not just roads and bridges, but in broadband, so people can telecommute.”

Rep. Jeffrey Pierce, R-Dresden, is running for his third term in House District 53, this time against Hepler.

He agreed with his challenger on the need for more vocational programs in high school, but said, “We need to think about all energy sources.” Pierce said hydropower is a good and cheaper alternative to solar, and there is a need for natural gas.

“We can do it in an environmentally sound way, but we really need to be open to all solutions,” he said.

“Some of our businesses are, in fact, being held back from growing because they aren’t able to find skilled younger workers that we need,” Vitelli said. “It’s the entrepreneurial spirit of the Maine people that I think we can capture better as a way to help grow our economy.”

The forum later shifted to a question by Oliver about the recent and ongoing increases in the minimum wage.

Hepler answered the question first, saying she supports the increase in the minimum wage because a livable wage is important and could cut down on the need for state assistance. 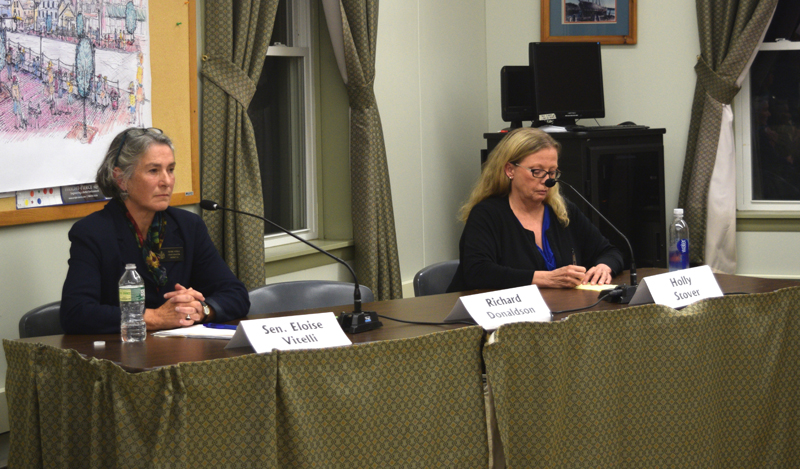 “I’d be in favor of letting it go up (to $11) and letting us assess it,” Hepler said. “Let us see how that would work for small businesses.”

Pierce focused on how the rising minimum wage affects businesses, especially those that hire teenagers.

“Minimum wage is for minimum skill for a minimum job,” Pierce said. “I think people should be paid for skilled labor, and I think they should be paid well for it.”

Each increase in the minimum wage affects other business expenses, like payroll taxes, Pierce said.

Vitelli supports the minimum wage, but agreed with Hepler on the need for an assessment of the impact on small businesses.

“Let’s remember, though, that one of the reasons Maine has a hard time attracting people and keeping people here is because our wages are low,” she said. “If we want to boost our economy overall, increasing the minimum wage is one way we could do that.”

Stover supports the increases in the minimum wage because the people who work those jobs work odd hours and work hard, she said. Like Hepler and Vitelli, she supports the idea of assessing the impact on small businesses.

She said a higher minimum wage gives workers who receive the wage an opportunity “not to be reliant on subsidy or other programs.”

Hawke said she does not support the increase in the minimum wage because, beyond businesses, it affects teenagers who want their first job.

Putnam supports the increase since “people are stuck in these jobs” because they “do not have the right education to get the higher-paying jobs.”

“I think it would be great if people could get a jump into an associate degree or community college while they are still in high school,” he said.

Other topics discussed at the forum included referendum Question 1 on the November ballot, health care, energy, and campaign tactics.

Lincoln County Television filmed the forum. LCTV is channel 7 on Tidewater and channel 1301 on Spectrum. To watch online, go to lctv.org and click on “watch,” then click on “now showing on LCTV.”

The Lincoln County News will host its next candidates forum at the Waldoboro municipal building at 6 p.m., Thursday, Oct. 11.