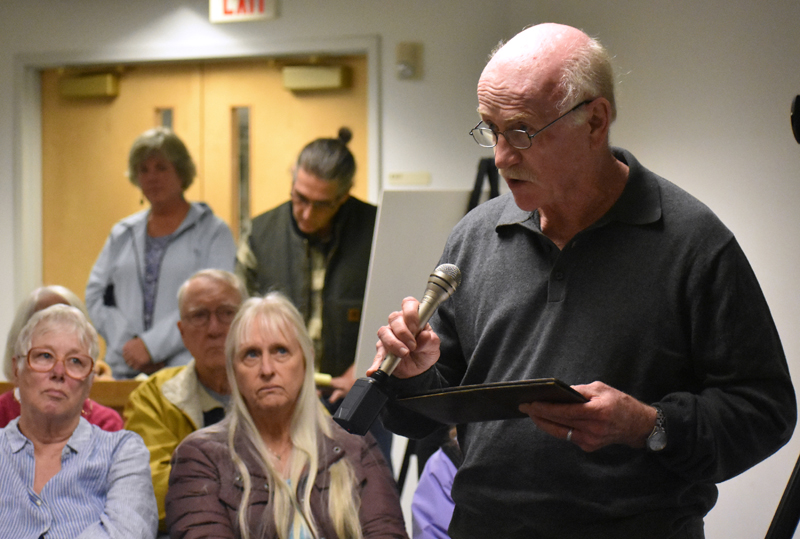 Six candidates to represent Lincoln County towns in the Maine House of Representatives talked about how to fund public education and how to expand access to early childhood education during a forum at the Waldoboro municipal building Thursday, Oct. 11.

The Lincoln County News hosted the forum, the second in a series of three this month.

The candidates for House Districts 80, 88, and 91 participated in the event. Attendees filled the chairs in the municipal building’s meeting room, with more area residents and voters standing in the back.

Midway through the evening, Dewey Meteer, of Nobleboro, asked the candidates their stance on expanding access to early childhood education opportunities, such as Head Start and public prekindergarten.

House District 91 consists of Waldoboro in Lincoln County and Friendship, part of Union, and Washington in Knox County.

Evangelos said he is a strong proponent of early education opportunities, as they can play a big part in fostering educational success down the road.

“Anything we can do to reach youngsters at an early age, before they get to pre-K, makes for stronger students. We are laying the groundwork for success in the future for these youngsters,” Evangelos said. 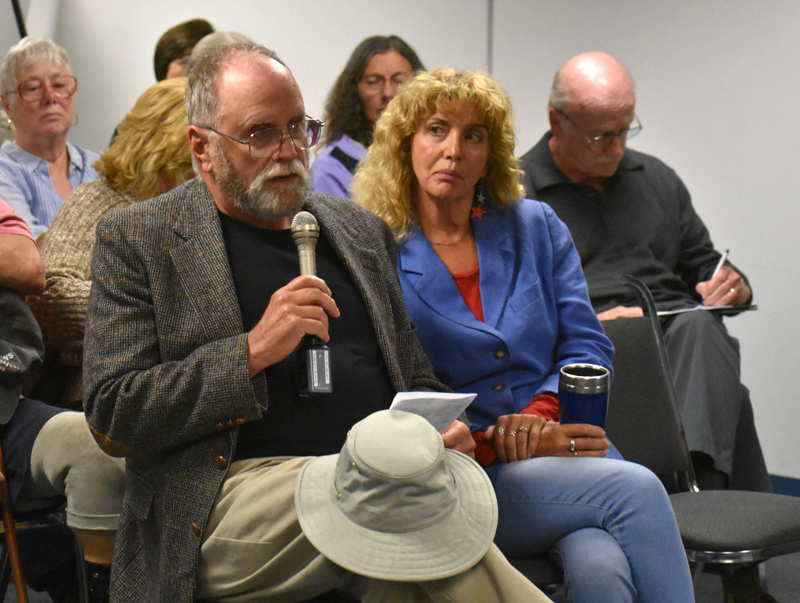 Joe Grant, of Wiscasset, asks a question about how to attract employers and good jobs to the area during a candidates forum in Waldoboro on Thursday, Oct. 11. (Alexander Violo photo)

In response to the same question, most candidates expressed support for early childhood education opportunities, though strategies varied, particularly in regard to funding.

Evangelos’ opponent, state Rep. Abden Simmons, R-Waldoboro, thinks preschool and kindergarten are an opportunity to set kids on the right course in the early stages of their lives. 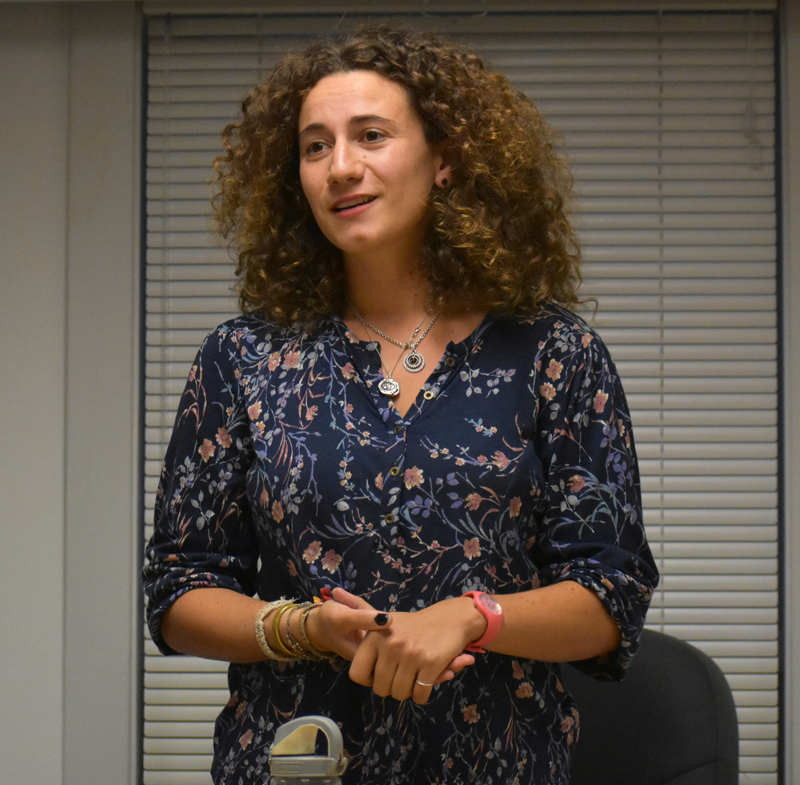 “We need to mold our children early – get them motivated and going in the direction they need to go,” Simmons said.

Simmons, citing his own experience as a high school graduate who didn’t go to college, said it is not always necessary to push kids toward a four-year university. He said he is concerned that students are being left behind at area high schools who could benefit from vocational education.

“Some of our poorest communities need help with funding and putting together the structure to manage these programs … this needs to be a priority,” Ball said. “We all support it. It’s the beginning impact to the direction a child takes.”

House District 80 consists of the town of Somerville and the unorganized territory of Hibberts Gore in Lincoln County, and part of Augusta, as well as Vassalboro and Windsor, in Kennebec County.

“What we need to do is not just talk about funding it. We need targeted funding and to do it in a strategic nature, instead of saying we have to put a lot of money into this,” Bradstreet said.

Chloe Maxmin, D-Nobleboro, is running for House District 88: Jefferson, part of Nobleboro, and Whitefield in Lincoln County, plus Chelsea in Kennebec County.

Maxmin said that nationally, only one in three children ages 3-5 is eligible for Head Start because of a lack of funding.

“We need to strengthen and prioritize funding – make sure money gets to the places it needs to go,” Maxmin said.

Michael Lemelin, R-Chelsea, who is running for the GOP because incumbent Deborah Sanderson, R-Chelsea, is term-limited, said there are not enough tools and resources to address access to early education opportunities.

“What we need to do is make sure schools are properly structured. Every single child has a right to a good education and that is not being done,” Lemelin said. 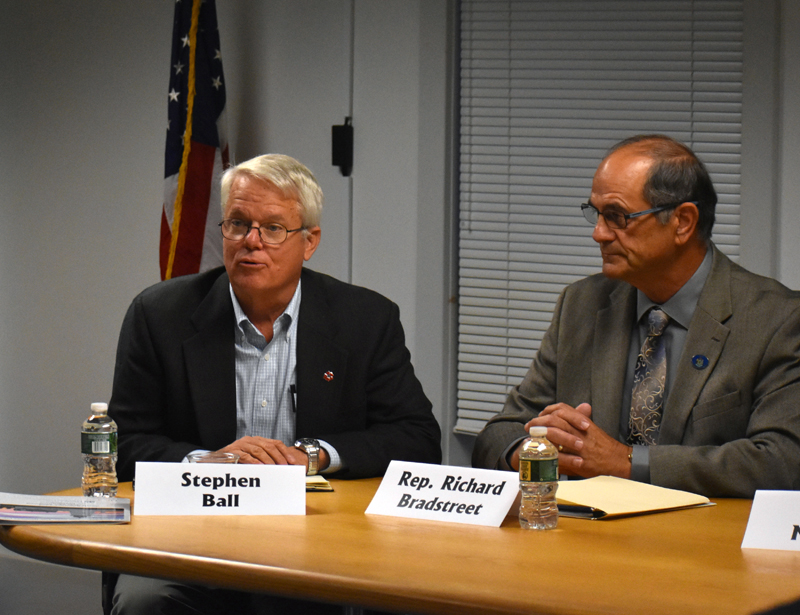 The first question of the forum was from Christopher Johnson, a former state senator and current first selectman in Somerville.

Johnson asked the candidates for their thoughts regarding education funding, specifically Maine’s 2004 vote that requires the state to fund 55 percent of public education.

Bradstreet said he supports the gist of the law, with the caveat that the state’s education formula needs changes.

“The education formula favors schools in the southern part of the state, where towns are financially better off, and rural Maine is getting the short end of the stick. Yes, I support (55 percent), but it is not always as simple as it seems. It is a goal we should pursue,” Bradstreet said.

Ball said he supports funding schools at 55 percent but agreed with Bradstreet regarding the need to re-examine the funding formula.

Maxmin said the state’s inability to fund public education at a rate of 55 percent leads to high property taxes in rural areas, and small towns need to be treated equitably when it comes to school funding.

“Yes, I think we should fund 55 percent of our public schools budget. This plays into the larger theme of our government not respecting the will of the voters,” Maxmin said. 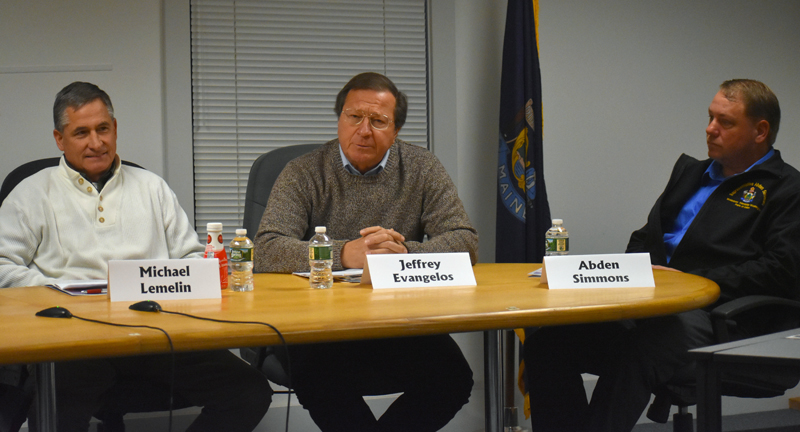 Lemelin said that although he is in favor of meeting the state’s obligation to fund public schools, the issue is a complex one. He compared the 2004 referendum to more recent laws passed as a result of citizen’s initiatives, some of which he believes were not constitutional.

“This is a more-than-meets-the-eye problem. Referendums are not always worded properly and people could end up voting for something that actually hurts them,” Lemelin said.

“A variety of administrations and legislatures have refused to comply with the will of the people. We have cut taxes on the wealthiest people and forced taxes to go up on the weakest people and the elderly. The state ended the year with a surplus and there is a growing problem with revenue sharing. We aren’t meeting that obligation either,” Evangelos said.

“The tax code has been tweaked several times in a more regressive fashion. Tax cuts for the wealthy has not been an effective strategy,” Evangelos said.

“It’s not fair to people up here that Southern Maine is taking the lion’s share of the funding. They have such a big budget down there, it’s running rampant and it’s very frustrating,” Simmons said.

Other topics discussed at the forum included how to attract good jobs to Maine and the impacts of climate change on the Midcoast.

The Lincoln County News will host its final candidates forum of 2018 in the cafeteria at Great Salt Bay Community School in Damariscotta from 6-7:30 p.m., Thursday, Oct. 18.