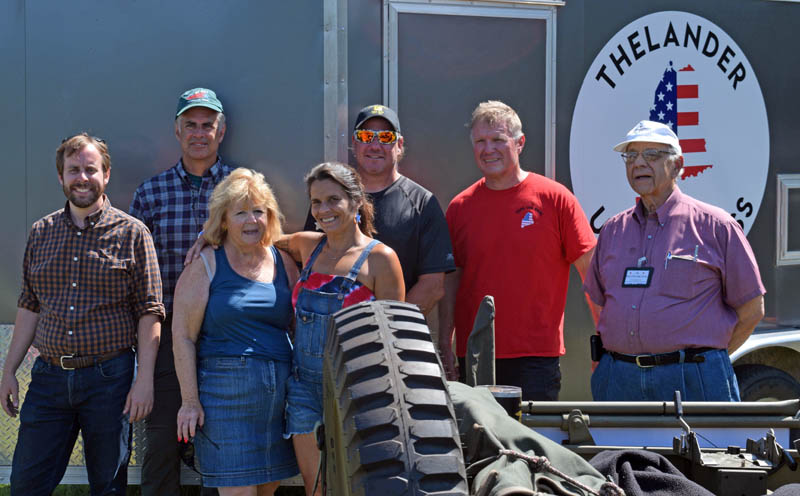 More than 100 people of all ages gathered at the Trump Wall in Waldoboro for the Lincoln County Republicans’ Great American Picnic on a Sunday, July 10.

Ed Thelander, candidate for the U.S. House of Representatives 1st Congressional District, said his main goal is to get out the vote and help create a “red wave” in November.

“Change is happening right now,” Thelander said, and he wants to be part of that change. He noted that many people at the picnic were in fact independent voters, not Republicans.

“We’re getting Democrats to come over,” Thelander said of his campaign.

Thelander, a Bristol resident and retired Navy SEAL, said he is a big believer in term limits. Once politicians get into their fourth term, he said that special interests take over and that’s when taxpayer money starts to be spent more recklessly.

Thelander said he has never run for office and is doing it because he was asked to by the Republican Party. He wants to find middle ground with Democrats in Congress, he said.

Heather Sprague, candidate for Maine House District 43, said she believes the government is attacking individual freedoms with mask and vaccine mandates as well as the lobster industry with right whale restrictions.

“I believe in the American Dream and I believe in our freedom,” Sprague said. “We need real people with real solutions.”

Eric Brakey, who served two terms in the Maine Senate from 2014-2018 and is running for the District 20 seat in November, said he wants to “restore our freedoms and our paychecks.”

“I came to support all the local candidates,” he said.

Brakey decried the “reckless fiscal policies” of the democrats currently in power in the State House and the Blaine House.

“I want to better protect the Maine people from inflation,” Brakey said. He mentioned suspending taxes on things like gasoline and heating oil to help bring some immediate relief.

“It’s about turning the corner and getting back on track,” Brakey said.

There was a pie and bake sale, a hot dog and hamburger cart, and a silent auction. Kids ran around and adults played cornhole against the backdrop of contractor Tony Lash’s monument to former President Donald Trump on Route 220.

The wall is a mound of cement blocks stacked on top of each other about 12-15-feet high and decorated with Trump banners and signs decrying President Joe Biden. It was installed in September 2020 prior to the presidential election and now boasts “Trump 2024” banners.

The Midcoast band Diamond in the Rough played mellow and hard-driving classic rock tunes throughout the afternoon.

A drone was also on hand to take aerial photos of the gathering. Proceeds from the picnic went to support the Lincoln County Republican Committee and its candidates.