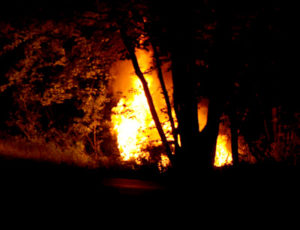 A Whitefield man was allegedly intoxicated when his car rolled over and then burned on North Clary Road in Jefferson the evening of Tuesday, June 28.

Paul Glidden, 27, the driver and sole occupant of the 2000 Subaru Forester, sustained a back injury in the accident, according to Lincoln County Sheriff’s Office Lt. Rand Maker. Waldoboro Emergency Medical Services transported Glidden to LincolnHealth’s Miles Campus in Damariscotta.

Glidden also faces a charge of operating under the influence in connection with the crash, according to Maker.

Glidden was not wearing a seat belt. The vehicle’s airbags deployed during the crash.

About 15 Jefferson firefighters and first responders worked for about an hour to extinguish the fire, which spread to nearby brush and trees, and to help Hillside Collision Center, of Waldoboro, remove the vehicle. Firefighters also cleaned up a small amount of gasoline that leaked from the vehicle.

The road was closed to through traffic during the emergency response.