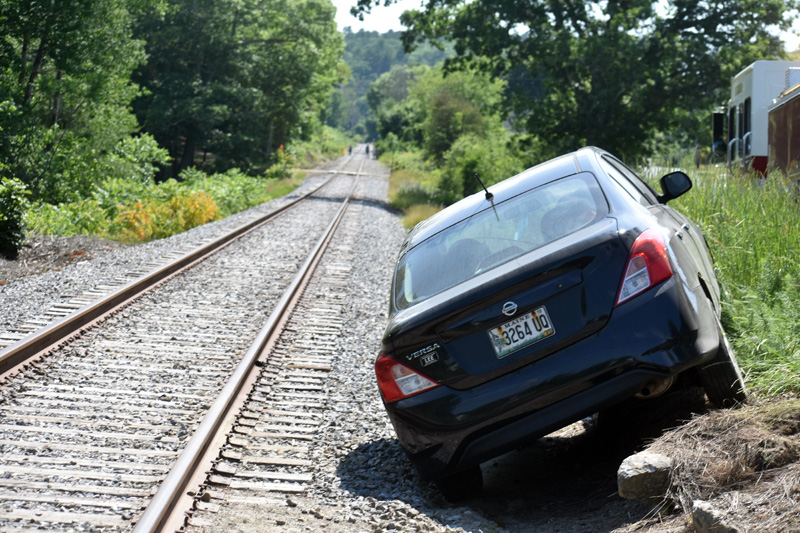 A Nissan Versa along the railroad tracks in Nobleboro after a crash, Tuesday, June 23. (Alexander Violo photo)

A car crash near the junction of Bayview and Borland Hill roads in Nobleboro temporarily closed the nearby rail line to train traffic as crews removed the car from an embankment near the tracks, Tuesday, June 23.

A Nissan Versa sedan was going toward Newcastle, bearing left to stay on Bayview Road rather than go up Borland Hill Road, at the time of the crash, according to Nobleboro Fire Chief Richard “Moose” Genthner. The car went off the southbound lane and came to rest near the tracks.

The identity of the driver and sole occupant of the vehicle was not immediately available. Lincoln County Sheriff’s Deputy Jonathan Colby said the crash is under investigation.

Colby said paramedics were checking the driver at the scene and he did not know if the driver would need to go to the hospital.

“We need to stabilize it first. Otherwise, if we just remove it, the car is liable to roll over,” Kennedy said.

Genthner said emergency services called the railroad to ensure rail traffic was halted until the vehicle was removed.

Canadian Pacific Railway operates the line, which is predominantly used to transport cement from the Dragon Cement Plant in Thomaston.

“They shut down the track. They call all the switches and make sure they know about it,” Genthner said.