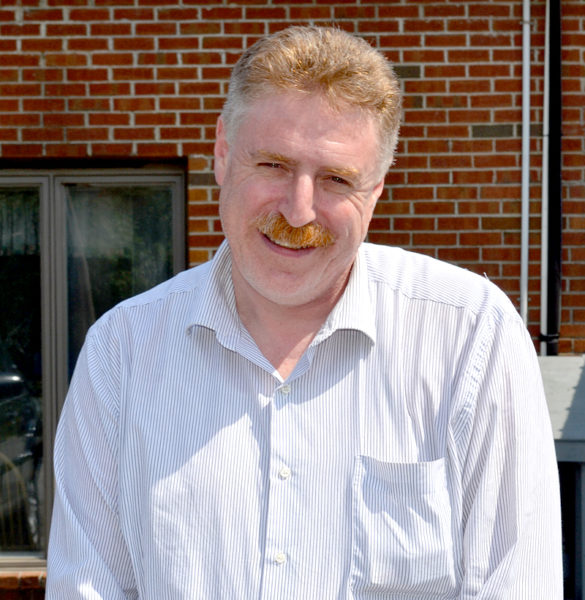 Jeff Slack is the case manager for Maine Medical Center’s CarePartners program in Lincoln County. The program recently celebrated its 15th anniversary in Lincoln County and has become an important element of law enforcement outreach to heroin and opioid addicts. (Abigail Adams photo)

MaineHealth’s CarePartners program celebrated its 15-year anniversary in Lincoln County in August. What began largely as a billing program for low-income individuals struggling with medical bills has grown into much more, said Anni Pat McKenney, coordinator of the Coulombe Center for Health Improvement.

The CarePartners program, which provides uninsured low-income individuals with health insurance, is now a crucial element of the Lincoln County Recovery Collaborative, a partnership between law enforcement agencies and the medical community to provide treatment to heroin or opioid addicts before their addiction results in incarceration or death.

Jeff Slack is Lincoln County’s only case manager for the program, which is run through the Maine Medical Center. For eight years, he has helped thousands of uninsured and underinsured individuals access health care by connecting them to free and reduced-cost health insurance and medication.

Referrals to the program have typically come from doctors’ offices and emergency rooms, Slack said. As a result of the recovery collaborative, the Lincoln County Sheriff’s Office and the Damariscotta, Waldoboro, and Wiscasset police departments will now also be sending people to Slack and the CarePartners program.

Directing people to the CarePartners program was, “an enormous leap” in the police department’s outreach efforts, Hasch wrote in a memo advocating for more resources for the program. “Once I was able to push people to obtain some health and dental insurance through the program, we reaped huge benefits,” Hasch wrote. “Many people were willing to get help because we offered them something real … something concrete.”

Unlike other outreach efforts in the state, which focus on connecting addicts to long-term inpatient treatment facilities, the Lincoln County Recovery Collaborative is geared toward providing heroin or opioid addicts with the resources to break free from the cycle of addiction while remaining in the community.

The Mid Coast Hospital’s Addiction Resource Center in Damariscotta is the immediate point of contact for individuals seeking treatment, McKenney said. Through the CarePartners program, the collaborative hopes to connect individuals with the health insurance that will allow them to receive treatment in the long term, she said.

As coordinator for the Coulombe Center for Health Improvement, which was established to provide community-based health and wellness resources, McKenney has worked on the Lincoln County Recovery Collaborative as a representative of LincolnHealth since the program was first proposed in December 2015. “We quickly realized that we could shift the model to have it be addiction treatment and general connection to health care,” she said.

Health insurance through the CarePartners program enables previously uninsured individuals to access behavioral health professionals stationed in LincolnHealth offices in Boothbay Harbor, Damariscotta, Waldoboro, and Wiscasset. It also allows individuals to access medication-replacement treatment with Suboxone, which can only be prescribed by specially licensed physicians.

The CarePartners program is one of several that Slack administers. CarePartners provides access to health insurance for currently uninsured low-income individuals. Slack also administers the FreeCare program, which serves individuals with insurance who are struggling to pay outstanding medical debts; and the MedAccess program, which provides uninsured or underinsured individuals access to free medications from pharmaceutical companies.

From the time he answers the phone and learns of a new referral to the time the paperwork is processed and complete, Slack is there to help individuals navigate the labyrinthine health insurance application process. Trust is an important element of completing the application process, especially with mental health and substance abuse issues in play, Slack said.

It is why the “soft handoff” from Hasch to Slack is so important, Slack said. It helps build trust and enables continued outreach to individuals who may have otherwise given up on the process.

The impact the resource has had on individuals suffering from substance abuse and mental health issues is enormous and the success stories are numerous, Slack said. “In the last six months, I can think of six people whose lives were probably saved” because Hasch connected them to the program, Slack said.

The ultimate goal is to help individuals transition out of the CarePartners program and purchase health insurance through the health insurance exchange, Slack said. The pride and self-confidence people have when they are able to provide for themselves is enormous, he said.

With rising premium rates and deductibles on the health care exchange, the goal is becoming harder and harder to obtain, Slack said. Many individuals who went through the entire process and were able to purchase their own health insurance are now returning to Slack to re-enroll in the CarePartners program, he said.

“It’s frustrating,” Slack said. “We got them all the way to the finish line and they got pushed right back to their starting place.”

With a heavy caseload already, Slack expressed concern about the increase of referrals that may result from the Lincoln County Recovery Collaborative – both in terms of caseload and in terms of the program’s cost.

Initiated by a federal grant 15 years ago, the CarePartners and FreeCare program are now funded by MaineHealth. Each of the five law enforcement agencies in Lincoln County could easily refer 40 people to the program in a year, Slack said Expanding the program to serve an additional 200 people will be expensive, he said.

There are a limited number of LincolnHealth physicians licensed to prescribe Suboxone, and they usually limit the number of patients they will treat due to the intricacies involved in drug-replacement therapy, McKenney said.

There are frustrations, Slack said, but there are also a growing number of success stories. “You get knocked down, but there’s a lot of good going on.”

The Lincoln County Recovery Collaborative is still working on ironing out the details of the partnership between law enforcement and the medical community, McKenney said. LincolnHealth’s role in the partnership, however, is to ensure heroin and opioid addicts starting the process of recovery have a permanent health care home, she said.

For more information on the CarePartners program, contact Jeff Slack at 563-4120.