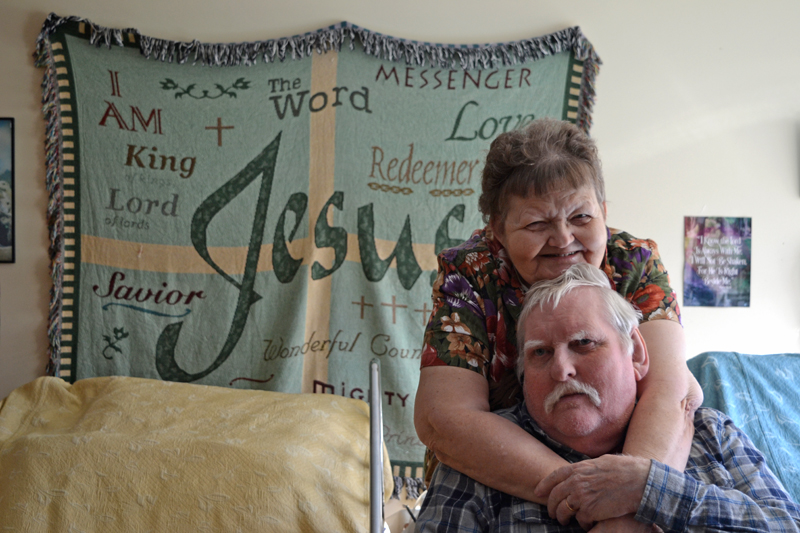 Marilyn and Elden Beane celebrate their 50th wedding anniversary in their room at Crawford Commons in Union on Friday, Nov. 10. (Christine LaPado-Breglia photo)

It isn’t every day one runs into a couple that has been married for 50 years. It is even rarer to be in the presence of such a couple on the very day of their golden anniversary.

Friday, Nov. 10 was such a day, when this reporter got to spend the morning with Lincoln County News columnist Marilyn Beane and her husband, Elden Beane, at Crawford Commons in Union, where the couple has lived since April 2014.

“Don’t find too many of them, do you? Fifty years!” said Elden Beane exuberantly, adding that the Beanes have gotten a lot of anniversary gifts, including much-desired postage stamps, from readers of Marilyn Beane’s long-running column, aptly titled “Marilyn Beane’s World.” Marilyn Beane has written her column for The Lincoln County News since 1982, after inheriting the column space from Elden Beane’s mother, Bessie Beane. 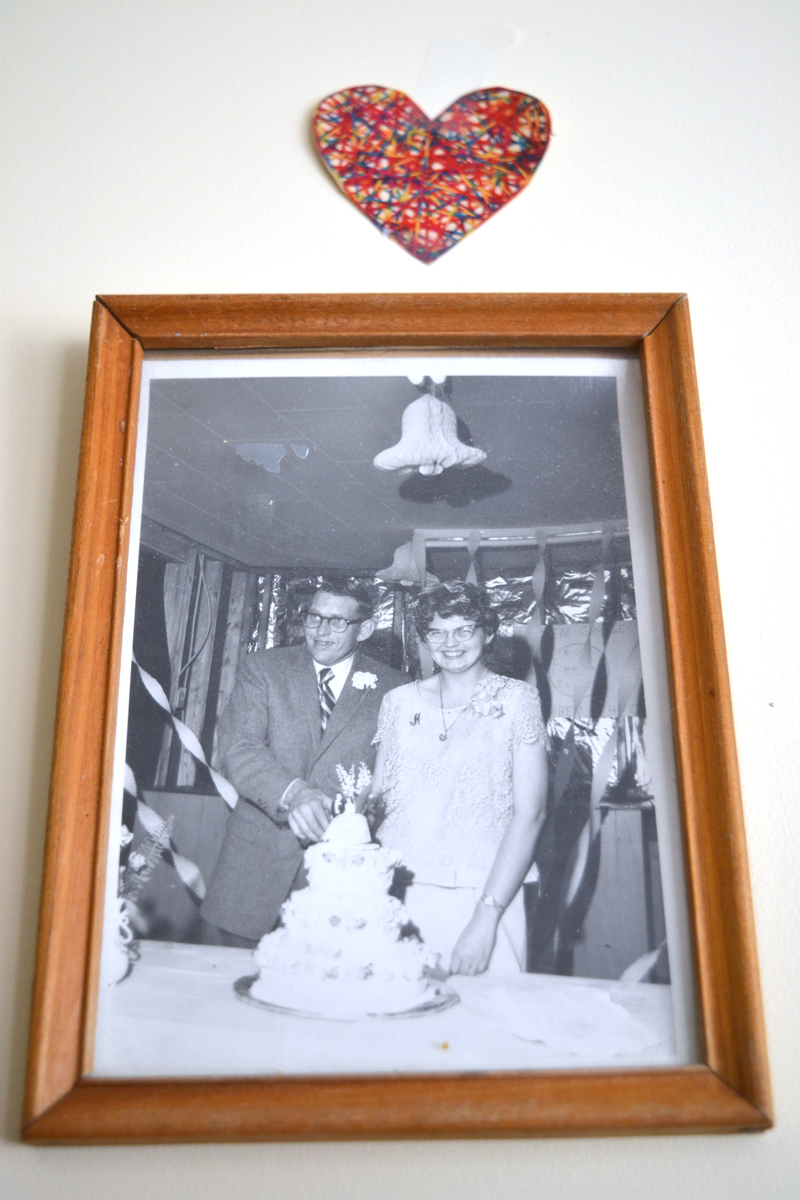 A photograph of Elden and Marilyn Beane on their wedding day, Nov. 10, 1967, hangs in their room at Crawford Commons. (Christine LaPado-Breglia photo)

“I never thought I’d be a writer,” said Marilyn Beane, who turned 77 in September. She also said she never thought she would be married for 50 years.

“No, no – never!” Marilyn Beane said with a laugh. “I didn’t think my body would hold out all this time!” Her good humor was in no way dampened by the fall she had taken the previous day, which caused her to fracture a rib.

Marilyn Beane said she and her husband, who will be 80 years old in April, first met at a birthday party in Camden on April 4, 1960. Both agreed that it was a case of love at first sight, though the couple would not marry until Nov. 10, 1967, even though Elden Beane had first proposed not long after they met.

“My parents were very strict,” said Marilyn Beane. “Elden was crippled … and my father made us break up.”

Marilyn Beane said that her father forced her to marry another man, one she was not in love with. That marriage ended in divorce after not too much time.

It was thanks to her brother, Arthur, that she and Elden Beane finally tied the knot after she moved back in with her parents.

“My brother got us back together, actually,” Marilyn Beane said. “He told Elden, ‘I think you’re going to get my sister back.’”

“Her brother said I should have had her in the first place,” said Elden Beane.

“I felt pretty happy,” Elden Beane said, a big smile on his face. “I told her, ‘Are you going to marry me now and stay with me?’”

“I said, ‘Yes, I am,’” said Marilyn Beane. “My father said, ‘Oh, she’s going to get married again!’” Her father, by this time, was supportive of the marriage.

“I think (Elden) was just waiting for that (first) marriage to break up,” said Marilyn Beane, chuckling.

Marilyn and Elden Beane got married in the parlor of his family’s farmhouse on Depot Road in Warren. Elden Beane was 29 years old and his bride was 27. 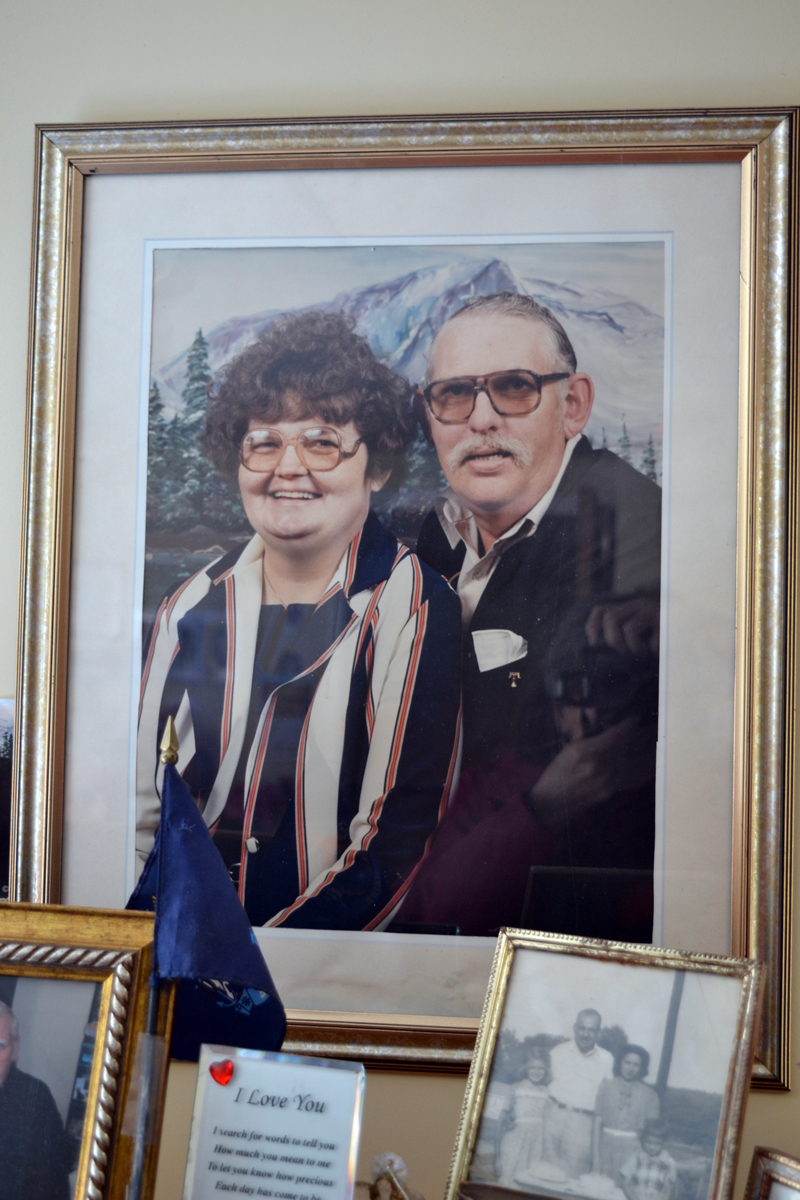 A 1987 photograph of Marilyn and Elden Beane sits alongside other memorabilia in their Crawford Commons room. (Christine LaPado-Breglia photo)

Regarding the secrets to a long marriage, Marilyn Beane said, “You’ve got to really love each other.”

“We were both in love and we knew we was,” said Elden Beane.

“We had an awful lot in common,” Marilyn Beane said.

Besides an obvious propensity for laughter and a mutual devotion to their Christian faith, the two – who have no children – said they had certain household appliances in common.

“I told him my mother had an old E-Z washing machine with a spinner that would dance around the room,” Marilyn Beane said, laughing. “I told him about it, and he had one, too!”

Both began laughing at this point, to the delight of this reporter.

“Something else we had the same, too, was his mom bought a 1950 Kelvinator refrigerator that she bought to replace her icebox,” Marilyn Beane said. “That happened to be the same with my mother and father, the same year!”

When told that they seem to enjoy laughing a lot, Marilyn Beane said, “Yes, we always have! We joked, we sang together, we laughed!”

Marilyn Beane recalled telling her mother when she 16 years old that she wanted to marry “a man that was blond and blue-eyed … and that’s what I got! Not the first time, but I got what I wanted.”

The Beanes said they loved traveling together. “We used to go places together,” said Marilyn Beane. She added that some of those trips around Maine included stops at McDonald’s, Burger King, and Dunkin’ Donuts, places they loved to eat at but “places we shouldn’t have been maybe – my husband’s got sugar diabetes now.”

Health challenges and old age aside, Marilyn and Elden Beane are clearly strong in their love for one another and in their oft-proclaimed love for God, as “Marilyn Beane’s World” readers know.