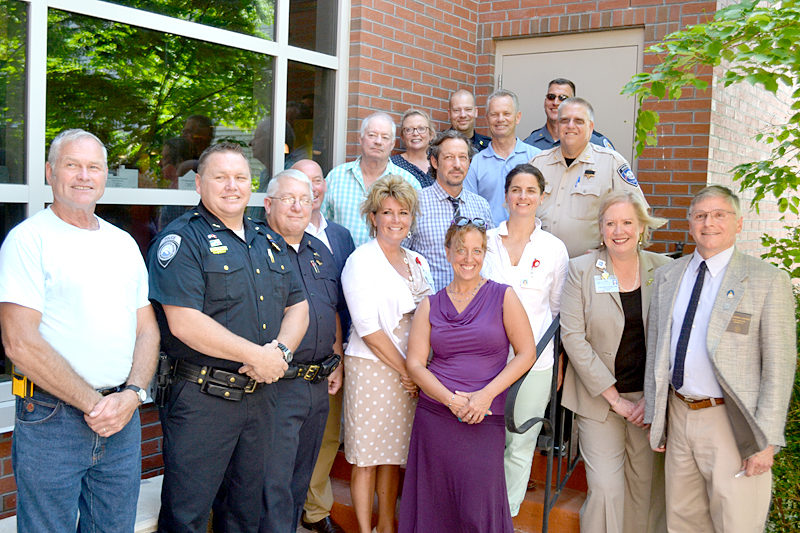 Officials from every law enforcement agency in Lincoln County, as well as LincolnHealth, the Mid Coast Hospital Addiction Resource Center, and the CLC YMCA, gathered to sign a memorandum of understanding in Damariscotta on Friday, July 15. The ceremony officially launched the Lincoln County Recovery Collaborative, an outreach and treatment program for heroin and opioid addicts. (Abigail Adams photo)

In December 2015, Lincoln County’s top law enforcement officials met to discuss a program to connect heroin addicts to treatment before their addiction results in imprisonment or death. On Friday, July 15, the same officials signed a formal agreement launching the Lincoln County Recovery Collaborative, a joint effort of the county’s law enforcement agencies and health care providers to combat the drug crisis through outreach and treatment. 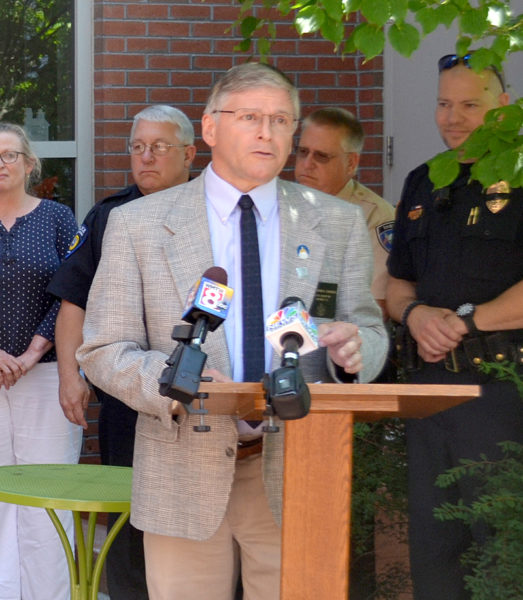 State Sen. Chris Johnson introduces the Lincoln County Recovery Collaborative, a program to connect heroin and opioid addicts to treatment resources without the threat of incarceration, during a ceremony in the courtyard of the Skidompha Public Library on Friday, July 15. (Abigail Adams photo)

The Lincoln County Recovery Collaborative is the county’s unique adaptation of the Scarborough Police Department’s Operation HOPE, or Heroin-Opiate Prevention Effort. The program, outlined in the memorandum of understanding signed Friday, marks the beginning of a county-wide effort to treat addiction as a health problem, not a crime, said state Sen. Chris Johnson, D-Somerville.

Lincoln County law enforcement officials, community volunteers, and medical providers have agreed to work together to reduce the stigma surrounding drug addiction, expand access to community-based treatment resources, and continue to identify local solutions to what law enforcement and public health officials have described as an epidemic.

The Boothbay Harbor, Damariscotta, Waldoboro, and Wiscasset police departments; the Lincoln County Sheriff’s Office; Mid Coast Hospital’s Addiction Resource Center, and LincolnHealth have committed to the initiative. Officials from each organization gathered at Skidompha Library in Damariscotta on July 15 to sign their names to the agreement.

Expanding access to inpatient, outpatient, and medication-assisted treatment options; expanding access to and training for the administration of the overdose-reversing medication naloxone; expanding prescription drug take-back days and drop-off locations; and encouraging responsible prescribing practices in the medical, dental, and veterinary communities are the initiative’s goals, according to the agreement.

Sober housing within Lincoln County has already been identified as a community need and a goal to continue to work toward, Johnson said.

The Lincoln County Recovery Collaborative grew out of a phone call to Johnson from a constituent. Former Gloucester, Mass. resident Bobby Whear, now of Nobleboro, contacted Johnson to ask if Lincoln County could start an outreach program similar to the Gloucester Police Department’s Angel Program and the Scarborough Police Department’s Operation HOPE.

The top official of nearly every law enforcement agency in Lincoln County met in December 2015 and agreed their communities would benefit from an outreach and treatment program, but questioned the logistics of launching a collaborative program that involved several law enforcement agencies and community partners in a rural area.

The program that developed in Lincoln County was largely influenced by the informal outreach efforts of the Boothbay Harbor Police Department, which has worked for several years to connect drug users to readily available addiction resources and medical care.

Unlike Operation HOPE, which focuses on connecting individuals to inpatient treatment facilities throughout the country, the Lincoln County Recovery Collaborative is working to increase access to local resources and build a culture in Lincoln County that supports and encourages a healthy lifestyle change for addicts.

Law enforcement officials already on the front line of the drug crisis will reach out to heroin or opioid addicts whom officials become aware of through 911 calls about an overdose, through a criminal investigation, or through community policing, according to the agreement.

The Mid Coast Hospital’s Addiction Resource Center, which has operated an outpatient substance abuse center in Damariscotta since 2008, will be the main point of contact for addicts seeking treatment.

The Addiction Resource Center is committed to ramping up resources for the clinic if the collaborative results in increased demand, so individuals seeking treatment are admitted to the program within one to five days of initial contact.

“That’s the commitment and that’s the reason for the (agreement),” Addiction Resource Center Director Eric Haram said. “When people ask for help, the answer is yes.” 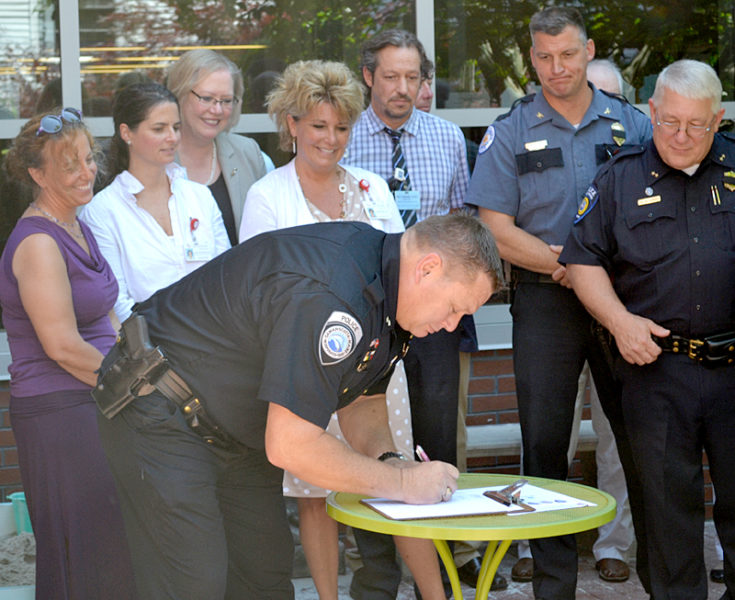 LincolnHealth has made heroin, opioid, and substance abuse issues a major focus of its strategic plan, according to the agreement. The health care provider has committed to encouraging responsible prescribing practices among its medical staff; increasing access to the CarePartners Program, which offers medical care to low-income and uninsured individuals; and connecting individuals seeking treatment to primary care physicians and behavioral health clinicians throughout the county.

“That’s why partnerships like this are exactly where we want to be,” Wade said. “This is not just about in-treatment facilities. There are multiple layers. There’s not just one solution but many.”

Lincoln County Sheriff Todd Brackett said the agreement “will open a new door and give us access to options we haven’t had in the past.”

While interim chief of the Paris Police Department in Paris, Maine, Wiscasset Police Chief Jeffrey Lange worked on a similar outreach program, Project Save Me, in Oxford County. The collaborative Lincoln County has formed to tackle the drug crisis is much broader and “way ahead of the game,” Lange said.

“Just in case you couldn’t tell by the smile on my face, this is a great day for Lincoln County,” Johnson said.