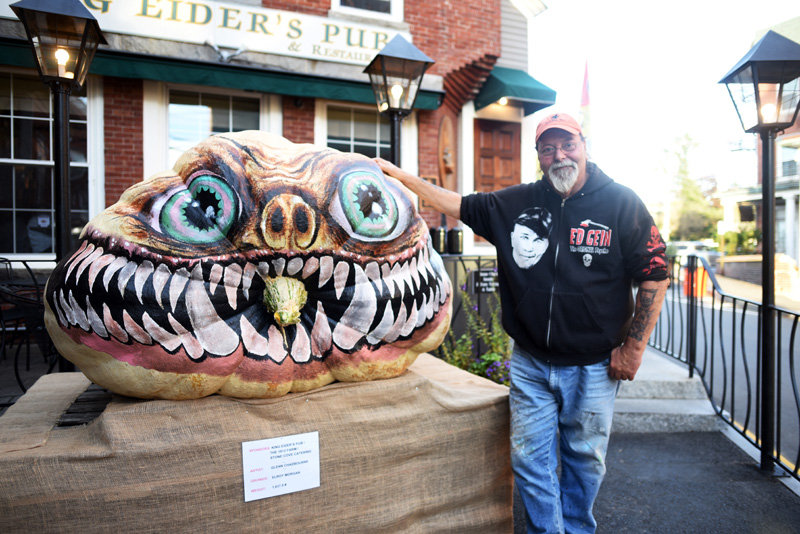 Newcastle artist Glenn Chadbourne stands next to his pumpkin monster in front of King Eider’s Pub in Damariscotta in October 2018. (LCN file)

Much to the dismay of his local fans, for the first time in the history of the Damariscotta Pumpkinfest and Regatta, Glenn Chadbourne’s artwork does not adorn a giant gourd in Damariscotta’s downtown.

During every previous edition of the local festival, the noted Newcastle graphic artist has painted a seasonal theme on the giant pumpkin installed in front of King Eider’s Pub. This year the King Eiders’ pumpkin was assigned to artists Elizabeth McGregor, of Newcastle, and Kimberly Sampson, of Damariscotta.

Sampson and McGregor collaborated to transform their pumpkin into a porcupine.

“We thought about doing a fox, chipmunk, we tossed a bunch of ideas around,” McGregor said. “We ended up picking a porcupine but we’ll probably do all those ideas in years to come.”

Sampson said the pair put a lot of thought into their decision, particularly in light of its location.

“It was a big decision for us because this location is the big stage,” Sampson said. “We wanted to do a good job but also be realistic about trying to match (Chadbourne’s) work.”

Chadbourne actually spent the bulk of Pumpkinfest weekend hunkered down in his Newcastle studio where he was working to meet a number of deadlines ahead of his scheduled appearance at Merrimack Valley Halloween Book Festival Saturday, Oct. 15, in Haverhill, Mass. 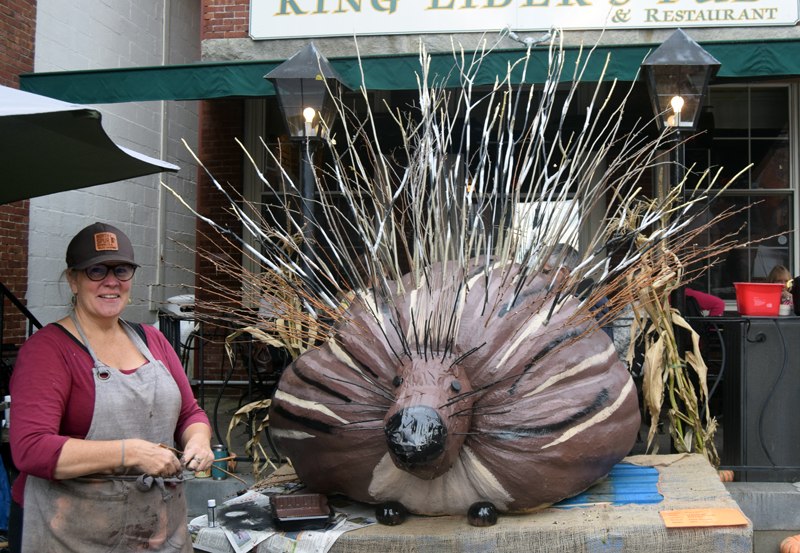 Newcastle artist Liz McGregor poses next to a pumpkin located outside King Eiders Pub during the Damariscotta Pumpkinfest and Regatta on Friday, Oct. 7. McGregor worked with Kimberly Sampson to decorate the pumpkin into a giant porcupine. State record-holder Edwin Pierpont produced the pumpkin, which weighed in at 1,677 pounds. (Alec Welsh photo)

The book festival is being held in person for the first time since 2019, Chadbourne said. It is a high profile event, attracting an international collection of creators and fans of the horror genre. Chadbourne said he is managing a packed professional schedule surrounding the book festival, juggling multiple commitments and a full slate of business meetings. His German publishers are even flying in for the occasion.

“I have umpteen things to do,” Chadbourne said. “I’m spinning a lot of plates.”

King Eider’s co-owner Scott McArdle said he thought Simpson and McGregor did a great job with their pumpkin and said their work has been well received.

“They did an amazing job,” McArdle said. “We got a lot of great feedback from our customers. People loved what they came up with.”

Overall, the Pumpkinfest weekend was very successful for his business, McArdle said. The festival and the artists collectively did a great job creating something to attract people to Damariscotta’s downtown one more time before the winter season comes on.

According to Pumpkinfest artist coordinator Lisa Conway Mcnair, Chadbourne was among the roughly 30 or so artists who did not return this year for one reason or another. The turnover, which is not particularly unusual, allowed other artists a chance to participate, Mcnair said.

“We have a number of new artists this year, which was particularly exciting,” Mcnair said. “Overall, I thought they were extremely creative in that they utilized their pumpkins in all different ways, and then also, some were specific to the business sponsor that sponsored that pumpkin … I think some of the ones outside of town were especially vibrant.”

Mcnair said other than providing the pumpkin and few guidelines – no politics, no religion, no jack-o’-lantern-type themes – the artists are free to design their own creation. Sometimes artists and sponsors collaborate on the art, but there is no requirement to do so, Mcnair said.

Chadbourne said he plans to participate in Pumpkinfest next year and every year thereafter, as long as he is welcome and available. The event does a lot of good for the local community and it is near and dear to his heart, he said.